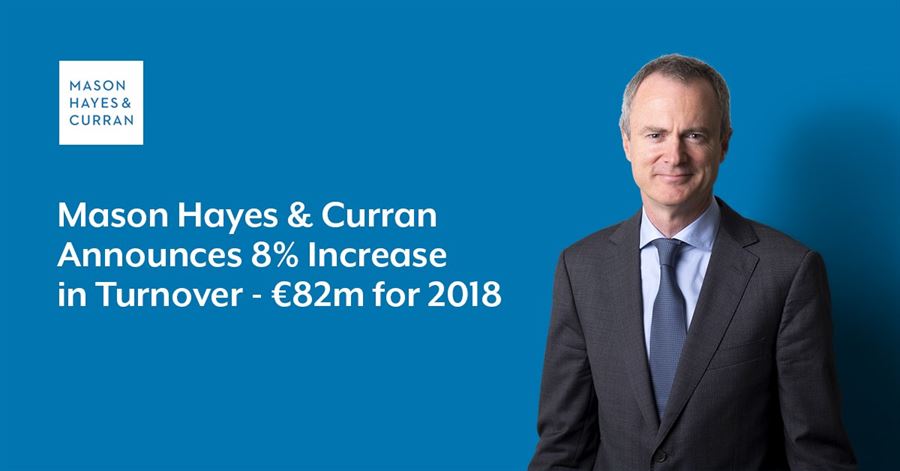 Leading business law firm Mason Hayes & Curran has reported a rise in revenue of 8% to €82 million in 2018.

The firm’s growth was broadly based with transactional services, such as corporate and real estate, being particularly busy. Demand was also very strong in the technology, energy and financial services’ sectors where the firm has leading practices. Litigation services were also very active with investigations, boardroom disputes, intellectual property disputes and healthcare litigation to the fore. The firm appointed 12 new partners across a variety of practice groups bringing the total number of partners in the firm to 87.

Commenting on the results, the firm’s Managing Partner, Declan Black, said “We are pleased that our service to clients has led to solid and sustainable growth in 2018. Obviously external conditions always impact on outcomes and in 2018 they were largely positive - although the Brexit risk looms large. But we can only control what we do, so our focus is giving our clients first-class expertise and deep experience and doing that in an unstuffy, innovative and collaborative way. It was gratifying that our emphasis on innovative service won us the FT’s top award for ‘Innovation in Legal Expertise’ but even more so that our innovations generate real value for our clients both in terms of cash savings and time efficiencies.”

Declan added, “Brexit continues to be a very significant risk but it does also create some opportunities for Ireland. The migration of financial services and other jobs is an obvious one. The increased competitiveness of Ireland as an FDI location relative to the UK is another. More recently, it is good to see the Government recognise that promoting and investing in the efficiency of the Courts Service is not just good for society as a whole. It is also a factor in attracting and anchoring both bricks and mortar and transactional business to Ireland with the corresponding economic benefit. With our common law system, EU membership and being native English speakers, we are very well placed to persuade firms to choose Irish law and the Irish courts to regulate their transactions and this leads to increased business in Ireland. But these natural advantages do need active support by Government policy and investment to be fully exploited.”

The firm has also continued to maintain its international presence in 2018, sending additional staff to its San Francisco office to support international clients who benefit from the availability of lawyers advising on Irish legal issues in both their own and the Irish time zones, which helps speed of service delivery.

Mason Hayes & Curran has Ireland’s leading Technology, Media & Communications Law practice, working with most of the world’s leading technology companies. In 2018, the team further expanded their working relationships with the existing clients and started working with a number of new, innovative and cutting edge companies in the technology space.

The introduction of the new GDPR regime in May 2018 continued to be a significant area of activity. The team acts as lead GDPR European counsel for many of the world’s biggest companies, and provided in-depth counsel and advice on readiness and compliance. The team is now acting on most of the largest GDPR investigations being carried by the Data Protection Commission.

Key matters from 2018 include:

The firm’s Dispute Resolution team is one of the largest in the country. The team has unrivalled experience in all types of high value dispute resolution in the financial services, construction, real estate, technology, energy, insurance and healthcare sectors. Their specialist litigators focus on boardroom and shareholder disputes, intellectual property, Government and regulatory inquiries, employment and benefits, procurement and competition and asset recovery. The team brings huge experience to managing disputes with international and reputational aspects and is adept at using arbitration, mediation and other forms of alternative dispute resolution.

Mason Hayes & Curran has the largest and most dynamic Real Estate team in the country. The market-leading practice operates across areas such as hotels & leisure, energy, institutional investment and occupiers and real estate development. In 2018, the innovative work of the team in developing a technology solution to speed up the residential conveyancing process which has supported some 5,000 transactions to date was recognised with the “Innovation in Legal Expertise” award at the FT Innovative Lawyers Awards in London.

In 2018, the firm’s Financial Services team continued to work with domestic and international financial institutions and investment funds across areas such as portfolio loan sales, structured finance transactions, investment fund establishment and secured loan transactions. The appointment of partner Daragh O’Shea to lead the Structured Finance practice, further strengthened the team’s reputation as expert financial services lawyers who provide legal and business advice that is strategically informed and aligned with their business objectives.

Mason Hayes & Curran has one of Ireland’s leading corporate practices, and in 2018 the team continued to represent international, blue chip corporates and leading Irish businesses on many of the most significant M&A transactions occurring in the Irish market. New partner hires Robert Dickson and William Dillon-Leetch further strengthened the international expertise of the team.

Read more in The Irish Times