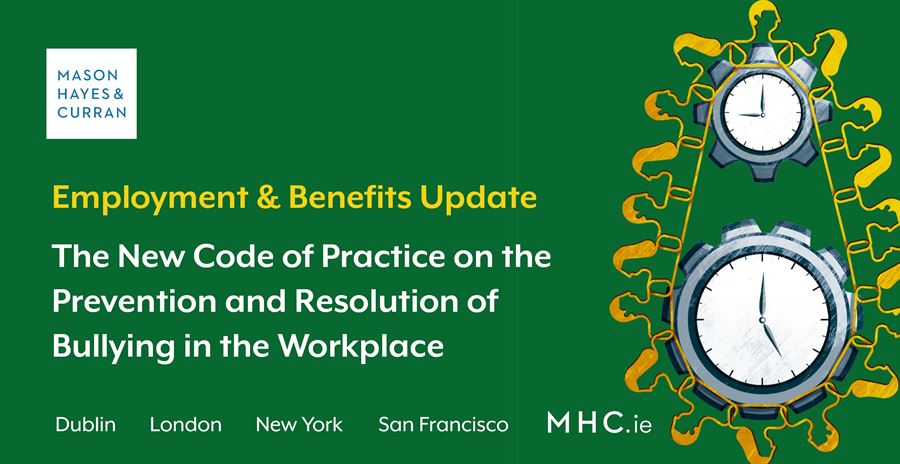 The new code of practice (COP) replaces two previous codes of practice on bullying, that of the Health and Safety Authority (HSA) of 2007 and the Labour Relations Commission's (now the WRC) of 2002. The COP was prepared jointly between the HSA and the WRC following a consultation process with other key organisations.

The Code of Practice

The COP retains the definition of bullying found in the previous codes of practice:

"Workplace bullying is repeated inappropriate behaviour, direct or indirect, whether verbal, physical or otherwise, conducted by one or more persons against another or others, at the place of work and/or in the course of employment, which could be reasonably regarded as undermining the individual’s right to dignity at work. An isolated incident of the behaviour described in this definition may be an affront to dignity at work, but, as a once off incident, is not considered to be bullying”.

The COP provides examples of behaviours which are to be considered bullying, such as social exclusion or excessive monitoring of work. Helpfully for employers, the COP also provides guidance on behaviours which are not considered to be bullying such as performance management, corrective action, or constructive feedback. In acknowledgement of the prevalence of cyberbullying, the COP notes that bullying can occur through websites, apps, emails and social media.

The COP provides employers with updated processes for resolving complaints of bullying. Unlike the previous codes of practice, the COP sets out two separate informal processes, and a formal process.

The COP suggests that a Contact Person be appointed in the organisation. This person will not be involved in the informal/formal processes. Instead their role will be to listen, to be supportive and to offer information and guidance to employees in line with the policies and procedures of the organisation.

The COP notes that early intervention offers the best possible potential for a constructive outcome to a bullying complaint. At an early stage, mediation should be considered as it entails voluntary participation by the relevant parties who work with a competent third party to help improve their relationship.

The COP provides that where appropriate, an employee should raise their concerns about behaviour which they deem to be unacceptable with the person responsible. This can be done in person or in writing. Where the concern relates to an immediate manager, it should be discussed with a person at the next level of management. This process seeks to resolve the matter informally by agreement and without recourse to any other step in the COP.

If the initial process is unsuccessful or deemed inappropriate then the secondary informal process should be followed. The employer will nominate a person, who is familiar with the procedures and has had adequate training to deal with the complaint.

The nominated person should establish the facts, context and next course of action. If the complaint concerns alleged bullying and includes concrete examples of inappropriate behaviour then the person complained against should be presented with the complaint and asked for their response to it. A process should be agreed to bring the issue to resolution and the employer should implement the suggested steps and monitor the situation.

Proceeding to a formal process should not be automatic; the informal processes should at least be contemplated. If the formal process is being invoked, the Complainant should make a formal complaint in writing outlining the precise details of the alleged incident/s of bullying.

The investigation should be governed by terms of reference to include its scope and timescale and how it will be conducted in accordance with the employers bullying policy.

An impartial investigator, other than the Contact Person, should then carry out an investigation and should meet on confidential basis with all parties involved including witnesses in order to establish the facts.

Once the investigator has met with all parties and has considered all the evidence, he/she will make a decision on the balance of probabilities whether the behaviours complained of have occurred. This is done after it has been established that the behaviours come within the description of workplace bullying. The nominated investigator can make a recommendation that the disciplinary procedure be invoked but should not uphold or dismiss the allegations, or suggest or impose sanctions.

The formal process should include the option for both parties to appeal the findings of the investigator. The reasons for the appeal should be set out in writing to management. The person nominated to deal with the appeal should be impartial. The appeal is not a re-hearing but instead should focus on the conduct of the investigation in terms of fair process and adherence to procedure.

Employers who have employees working from home should be aware that the COP applies to all places of work irrespective of whether employees work at a fixed location, at home or are mobile.

Employers should review their existing bullying policies and procedures to ensure that they comply with the COP.