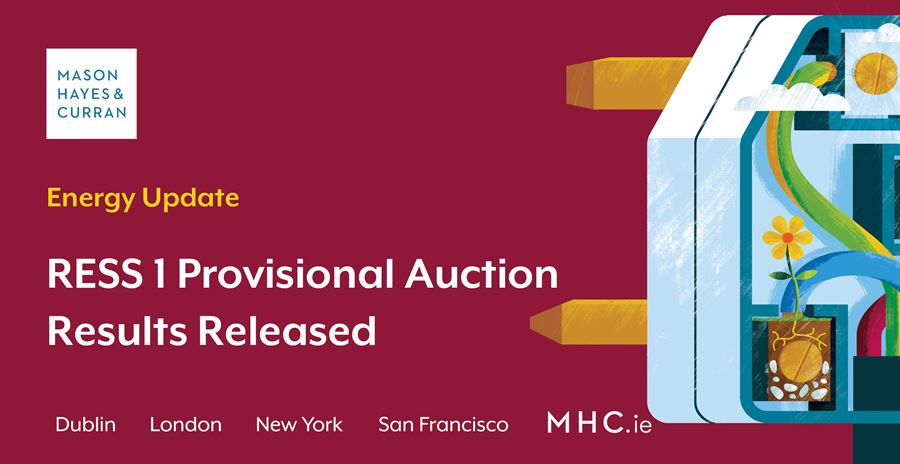 The first Renewable Electricity Support Scheme (RESS 1) was established on foot of the Climate Action Plan 2019 in an attempt to meet our target of delivering 70% renewable electricity by 2030. This was reaffirmed in the 2020 Programme for Government. Auction submissions were received between 21 and 28 July 2020 and the results are discussed in the breakdown below.

The success of solar in the auction, particularly the large number of successful projects with a capacity of less than 5MW, might be considered to be surprising, however, it reflects the fact that this was the first government support scheme for commercial solar electricity generation and it has been long awaited by the Irish solar industry. In addition, the RESS 1 terms and conditions were considered to be favourable to solar with tight programme dates for delivery of commercial operation. The timelines likely mean

t that a number of onshore wind farm projects decided not to participate in RESS 1 where some consents remained outstanding or their grid delivery dates did not provide sufficient buffers.

What This Means Going Forward

Following the formal notice of award, which is scheduled for 25 September 2020, projects will have 30 working days to enter an Implementation Agreement and post a performance bond and thereby commit to, amongst other things, achieving commercial operation by 31 December 2022 or at the latest 31 December 2023.

We anticipate that not all successful projects will be able to deliver on these commitments under their existing ownership and it is likely that there will be transactional activity through new investment or sales processes in the short term.

The Minister for Climate Action, Communication Networks and Transport, Eamon Ryan stated that “the first RESS auction provides us with a platform for rapid deployment of onshore wind and solar projects.” He notes that although developer-led onshore wind energy is the most cost effective technology for Ireland, the presence of solar and community owned energy projects will “play a critical role in diversifying our renewable generation portfolio for the period out to 2030”.

The first RESS auction represents an important step towards Ireland’s 2030 targets and is an historic milestone for the renewable energy industry as it moves from a centrally-determined tariff to support that is priced by competitive auctions. Not only that, but it provides clarity for developers of energy projects.

Those who were not in a position to apply to the first RESS auction will be able to watch carefully as the results unfold and will be in a good position to participate in subsequent RESS auctions which the Government has committed to holding on an annual basis.