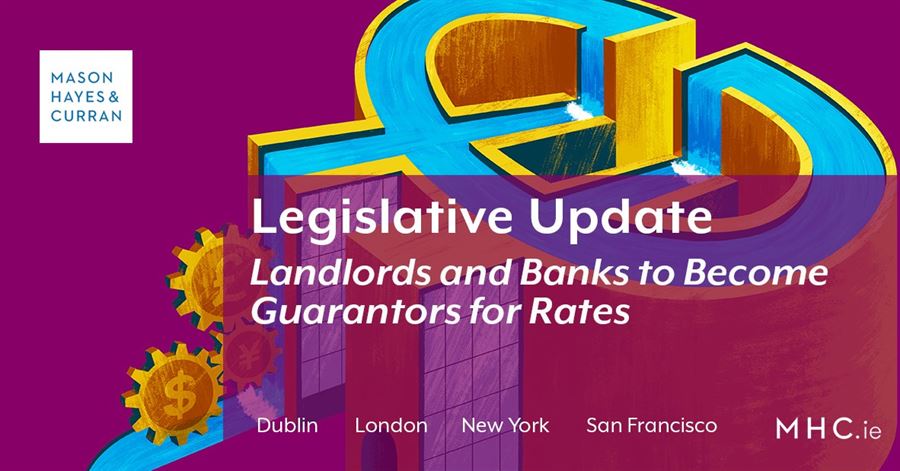 We previously wrote about the Local Government (Rates) Bill 2018, noting that if the Bill was not significantly amended we envisaged that it would result in increased costs on landlords and lenders, which would ultimately be passed on to tenants.

That Bill has now been enacted as The Local Government Rates and Other Matters Act 2019 (Act),[2] without significant amendment.

The Act, amongst other things:

The Act also re-enacts a number of provisions of section 32 of the Local Government Reform Act 2014, which remain untested and potentially problematic.[4]

Owner liable to pay rates on a sale

“The owner of a relevant property who proposes to sell the property shall, before the completion of the sale, pay to the local authority concerned any rates imposed under this Act and accrued interest which is due and payable in respect of that property.”

The terms highlighted above need to be carefully considered to understand the scope of this provision:

“any rates imposed under this Act” we are of the view that this provision will only apply to rates levied after the commencement of the Act.[5]

It therefore appears that a receiver appointed over a property, a landlord, or a mortgagee in possession must, before completing a sale, pay any rates imposed under the Act on that property together with accrued interest.

Unpaid rates to be a charge on the property

Section 14 provides that unpaid rates together with interest payable thereon are a charge[6] on the property, removing the benefit of the existing limitation period of 12 years as against purchasers for value in good faith and mortgagees.

Set off, receivers and mortgagees in possession

Section 7 provides for set off of sums due by person to a local authority against sums due by that authority to that person. Receivers and mortgagees in possession appear to fall within the scope of this section.

This would be illogical and unworkable and hopefully will not be utilised in practice.

Section 12 provides for interest at approximately 8 per cent per annum on overdue rates.

The Act is difficult to construe and will likely give rise to litigation to clarify its meaning.

If the Act is commenced without amendment, it will effectively make landlords and lenders liable for rates which have not been paid by occupiers.

We understand that there is a level of lobbying taking place seeking to amend the provisions of the Act. If that is unsuccessful, both landlords and lenders need to carefully consider their practices and standard documents.

Landlords may wish to consider actively monitoring the payment of rates and factoring unpaid rates into any decision to forfeit a lease or otherwise enforce against tenants. They may also wish to consider significantly increasing deposits on new leases to cover potential rates liability.

Secured lenders, both to landlords and owner occupiers, may wish to consider, amongst other things:

The Minister has indicated that this legislation will be amended before it comes into effect. See our new article here

[2] The Act, as enacted, includes amendments to the law relating to planning and development and residential tenancies, which are not considered in this article.

[4] For instance: the definition of “Owner” - which appears to include higher level landlords; the duty of owners to notify changes of occupation, even where they are not notified of same; and the fact that where an owner pays rates due by an occupier, the owner does not appear to have a subrogated claim against the occupier as the Act provides that such payment does not affect the liability of the occupier on rates for which he is primarily liable.

[5] At present, rates are imposed under section 61 of the Poor Relief (Ireland) Act 1838. The Act repeals that section and is not defined to be construed as one with the 1838 Act. Therefore, rates levied under the 1838 Act are not levied under “this Act”.

[6] The legal nature, ranking and registration requirements of this charge are not set out however, as it cannot be overreached on a sale by a mortgagee, it appears that it should be considered a first ranking charge.