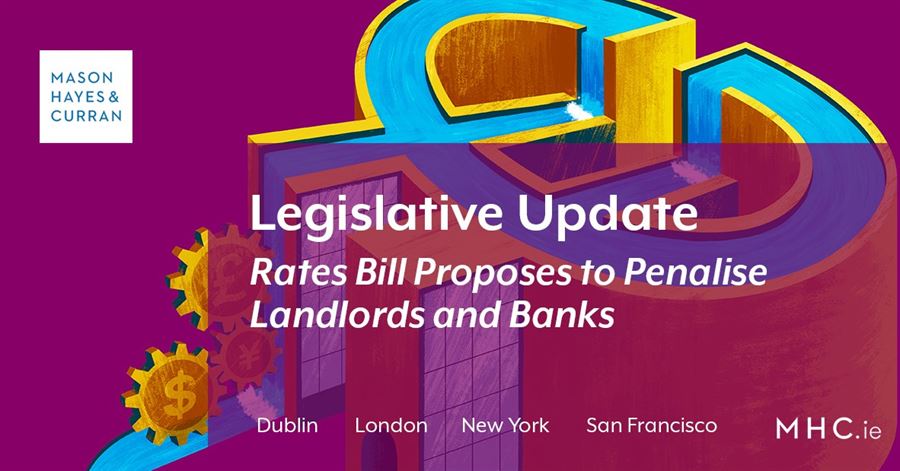 The explanatory memorandum to the Local Government (Rates) Bill 2018 (the “Bill”) states that it is intended to modernise the law relating to local authority rates. However this statement does not fully reflect the text of the Bill,[1] which, amongst other things:

The Bill also re-enacts a number of provisions of section 32 of the Local Government Reform Act 2014, which remain untested and potentially problematic.[3]

Owner liable to pay rates on a sale

Section 12 provides that the owner of a property, which includes a receiver or mortgagee in possession, must, before completing a sale, pay any rates imposed under the Act in relation to that property together with accrued interest.

This is not limited to rates ordinarily payable by the owner.

The Minister of State, on the second reading of the Bill stated: “This provision only applies to rates liabilities accrued by the owner when the owner is also the occupier of the property”. This does not appear to be the effect of the section, as drafted.

An on-going issue that is in the present legislation is that the definition of “owner” does not appear to deal with the pyramidal nature of the title to some leasehold land. For example, it would appear to require a management company of an industrial estate, potentially many layers removed from the occupiers, being required to discharge rates due from occupiers on transferring its low value interest to another management company.

Unpaid rates to be a charge on the property

Section 13 provides that unpaid rates together with interest payable thereon are a charge[4] on the property, removing the benefit of the existing limitation period of 12 years as against purchasers for value in good faith and mortgagees.

Set off, receivers and mortgagees in possession

Section 6 of the Bill provides for set off of sums due by person to a local authority against sums due by that authority to that person. Receivers and mortgagees in possession fall the scope of this section.

This would be illogical and unworkable.

Section 11 provides for interest at approximately 8 per cent per annum on overdue rates.

To put this in a banking context, the key effects of the Bill are broadly similar to the situation if each owner of property:

If obliged to act on that basis, a rational landlord acting on an arms-length basis would need to actively monitor the payment of rates, which would be unusual and create a significant additional administrative burden that tenants would most likely be asked to pay for. It might also consider whether it should require a deposit in respect of rates in addition to the rent deposit. This would be reasonable as significant arrears could accrue in the time period between discovering a default under the lease and successfully forfeiting a lease, especially if the tenant appealed.

However, leases, mortgages and loan agreements currently in place do not universally require such oversight.

The constitutionality of the Bill may come into question in due course as it ultimately permits the expropriation of the interests of landlords and lenders in property as a result of the wrongs of others, with no obvious countervailing public benefit.

If the Bill is not significantly amended during its passage through the Oireachtas, we envisage that it will result in increased costs on landlords and lenders, which will ultimately be passed on to tenants.

[1] For simplicity, references to the effects of the Bill are drafted on the basis that it will be enacted as drafted.

[3] For instance: the definition of “Owner” - which appears to include higher level landlords; the duty of owners to notify changes of occupation, even where they are not notified of same; and the fact that where an owner pays rates due by an occupier, the owner does not appear to have a subrogated claim against the occupier as the Act provides that such payment does not affect the liability of the occupier in respect of rates for which he is primarily liable.

[4] The legal nature, ranking and registration requirements of this charge are not set out however, as it cannot be overreached on a sale by a mortgagee, it appears that it should be considered a first ranking charge.