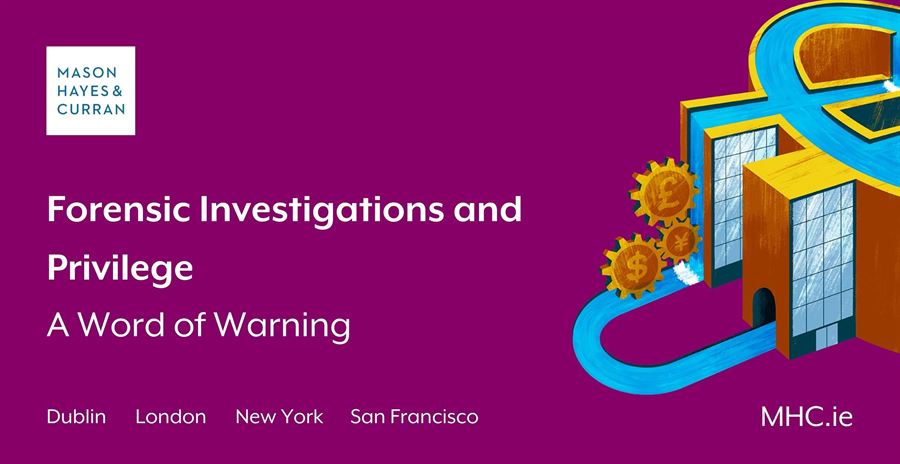 The Business Standard, an online newspaper, published allegations that Banque Havilland was part of a conspiracy against Qatar involving the use of bonds to undermine the Qatari economy. When the allegations were published, the bank notified its regulator and engaged an accountancy firm to conduct a forensic investigation into these allegations. Part of the scope of the investigation was to discover how the Business Standard had obtained its information. It is important to note that the accountancy firm were appointed via the bank’s lawyers.

The letter of engagement appointing the forensic investigators specifically stated that they would perform their investigation under the cloak of litigation privilege. When the State of Qatar subsequently brought proceedings against the bank, the bank declined to disclose the forensic investigators’ report, or drafts of the report. The bank claimed that these documents were the subject of litigation privilege. The bank also redacted references to the report in its communications with its regulator. The Court held that litigation privilege did not apply to the report, its drafts, or the related redactions in the bank’s communications with the regulator.

Privilege entitles a party to refuse to share communications with a third party. This includes the other side in legal proceedings, or the court in certain circumstances. Litigation privilege applies to communications between a client and lawyer where the dominant purpose of those communications is to prepare for actual or reasonably apprehended litigation. In some cases, it can apply to a third party, as was the case here. The rationale behind litigation privilege is that parties to litigation are free to prepare their case without being concerned that they may have to disclose their preparatory materials to their opponent. The key point is that the court must be satisfied that the primary or dominant purpose in creating the specific document over which litigation privilege is being claimed was litigation, either pending or threatened/anticipated.

In this case, the claim to litigation privilege failed because the Court held that litigation was not within the bank’s reasonable contemplation at the time the documents were prepared. The Court noted that no communication had been received from the State of Qatar in respect of its claim when the investigators carried out their investigation and prepared their report. The Court added that while the bank was in communications with its regulator at that time, the regulator was merely asking questions. The Court held that these questions were not adversarial. The Court stated that for litigation privilege to apply, the litigation must be adversarial and not investigative or inquisitorial.

The Court also noted that there were other reasons for the bank instructing the forensic investigators. These included investigating how the allegations had been leaked to the Business Standard and the preparation of answers to the regulator’s questions. Importantly, the fact the forensic investigators were instructed by the bank’s lawyers did not cure the claim to litigation privilege.

This decision by the Court seems harsh, especially in circumstances where the State of Qatar later brought proceedings against the bank while the regulator did in fact contemplate bringing adversarial proceedings. It remains to be seen whether this precedent will be followed in this jurisdiction where Irish courts have shown a willingness to allow litigation privilege to apply to documents prepared in respect of regulatory investigations, for example, in Ahern v Mahon, and Quinn v IBRC. However, this case does serve as a warning that it should not automatically be assumed that privilege applies to all types of regulatory investigations.

The bank had sought to take every precaution by engaging the forensic investigators through its lawyers and drafting terms of engagement that sought to apply litigation privilege to the preparation of any report by the investigators. However, in the Court’s eyes, this did not go far enough. Therefore, any firm instructed in a similar situation should consider whether proceedings have in fact issued in respect of their client and if not, whether they are anticipated or likely to materialise.

The letter of engagement between the firm and the client is also important. It should record the fact that the dominant purpose for the engagement is to assist in and prepare for the apprehended or pending litigation.

It is often the case that clients face litigation and regulatory investigations simultaneously. This case serves as a warning that preparing answers for questions raised by a regulatory body may not attract litigation privilege if the dominant purpose for which they are prepared is not the litigation.

In conclusion, where a firm has been appointed to carry out a forensic investigation it should do the following:

For more information on the scope of the new legislation and how your company can achieve compliance, contact a member of our Investigations & White Collar Crime team.