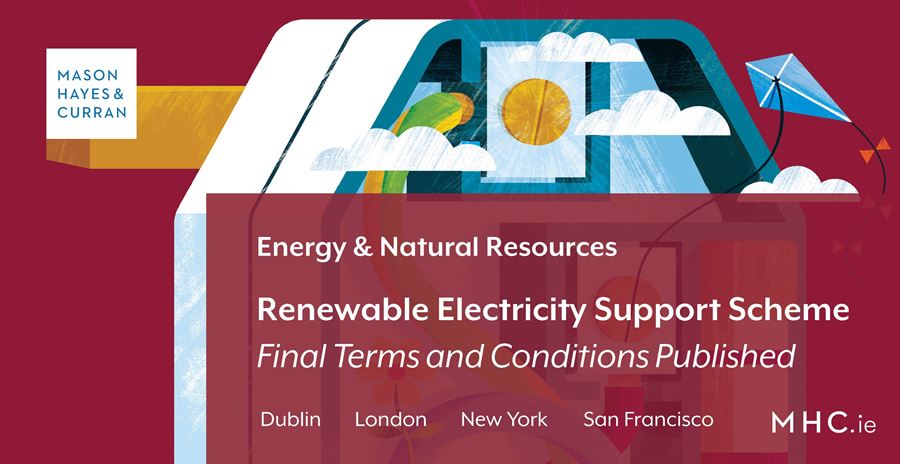 The final Terms and Conditions for participation in the first auction under the Renewable Electricity Support Scheme (RESS) – Ireland’s new flagship support scheme for renewable electricity generators – were published on 27 February 2020.

We are pleased to see some movement – between the consultation version of the RESS 1 Terms and Conditions, and the final version – on the following points:

Helpfully, the final Terms and Conditions accommodate the possibility of changes in applicant ownership between RESS qualification and RESS bidding. However, the identities of any potential new “future Principal Owners” need to have been included by applicants in their original qualification application, despite the fact that the acquisition or investment may not have been completed at that time. These constraints should be at the forefront of the awareness of buyers and sellers looking to contract for sales or investments involving potential RESS projects over this period.

There had been inconsistency – as between the consultation version of the Terms and Conditions, and EirGrid’s auction timetable – as to precisely when each project’s €2,000/MW Bid Bond was required to be posted. This confusion has been resolved and it is now clear that the bond is required at the time of applying for qualification.

Another helpful new element is the addition of a “Final Withdrawal Date” mechanism, which allows an applicant to withdraw its application and recover its Bid Bond at any time prior to a withdrawal deadline – which falls shortly after the announcement of the provisional qualification results, but before the date on which the results of any reviews are announced.

A new definition of “Installed Capacity” has been added, which references the MWAC nameplate capacity of all of the “Installed Plant” for the RESS 1 Project and which applies to projects of all technology types. The definition of Installed Capacity is used for the purposes of the Metering obligations and for setting the minimum and maximum installed capacity of the RESS 1 Projects, and industry sources have flagged that, as defined, it creates some uncertainty in respect of the measurement of that capacity.

The language of the Terms and Conditions had given rise to a concern that it might be necessary for project developers to procure additional “consent forms” from landowners. However, documentation subsequently issued by EirGrid has confirmed the requirement is merely for a declaration by a director of the RESS applicant, that to the best of his or her knowledge, information and belief “any necessary landowner consents are in place” for the project. This is a vastly preferable position.

On the following points – where we had previously noted that improvements might be possible – the position adopted in the final RESS 1 Terms and Conditions remains the same as that in the consultation version:

The publication of the final form of the Terms and Conditions for the first RESS auction is a major and very welcome step in the facilitation of the next phase in Ireland’s electricity decarbonisation process.

The industry will now await with interest the next event – being the publication by EirGrid of the “qualification information pack”, including the final form of the statutory declarations that will be required from the directors of applicant entities, along with the opening of applications for RESS qualification. This had originally been due to occur on Monday 2 March 2020. EirGrid’s latest RESS 1 timetable now indicates that, along with most milestones in the RESS 1 programme, it has been delayed by one week. It will now occur on Monday 9 March 2020.

For more information, contact a member of our Energy, Utilities & Projects team.

Editor’s note: original version of this article has been amended to clarify the landowner consent requirements.