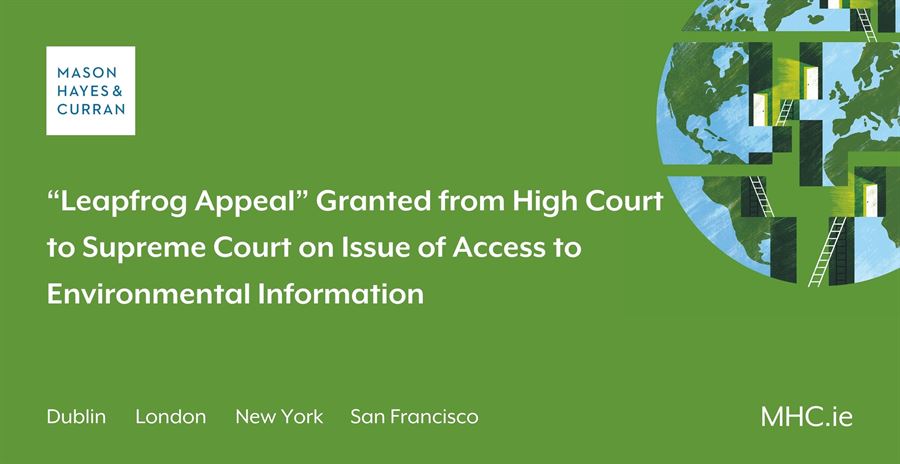 Background to the High Court judgment

Right to Know CLG (RTK) is a not-for-profit organisation active in the area of freedom of information and data protection. RTK made requests for documentation to the Secretary General of the President of Ireland (the Office) in 2017. RTK sought information relating to a speech given by the President in Paris in July 2015 at the Summit of Consciences of the Climate. They also requested an address given by the President at the New Year's Greeting Ceremony in January 2016. RTK made a further request for information held by the Council of State, when it advised the President on two pieces of legislation in accordance with the Constitutional requirements. RTK did not receive a response and appealed the deemed refusals to the Commissioner for Environmental Information (the Commissioner).

In the AIE Regulations, Ireland specifically excluded legislative or judicial bodies from its scope but had not excluded bodies whose decisions could not be reviewed. This second exclusion occurred at a later date, in amending regulations which came into force in July 2018. The State argued that, although these amending regulations were brought into force, they were not needed to avail of the exclusions in the Directive as these exclusions did not require a positive act. The Commissioner agreed with the State’s submissions. He found that the President’s and Council of State functions could not be reviewed under the Constitution and therefore did not need to be disclosed under the Directive. The Commissioner refused both of RTK’s appeals.

The judge, Mr Justice Barr, agreed with the Commissioner that if a decision by the President were to be ultimately reviewable by the judicial system, then that would be contrary to the constitutional provision on presidential immunity. The Judge also held that as the Council of State was advising the President, they also came within the immunity. However, Justice Barr found that the AIE regulations were in direct conflict with presidential immunity, and the Constitution requires that the AIE Regulations prevail where there is a conflict.

On the issue of whether Ireland as a Member State had to take a positive step to incorporate the exclusion provisions, the Judge considered EU case law and determined that it did. Ireland had not taken the positive step to exclude a body whose decisions could not be reviewed but had taken the positive step to exclude judicial and legal functions from the scope of the regulations. Because of this, the information related to the Council of the State’s consultation to the President on proposed legislation was not required to be disclosed to RTK. However, Justice Barr considered that the information related to the two speeches did not fall within the President’s legal functions and the commissioner had erred on this point. That part of the decision was referred back to the Commissioner.

The State sought leave to appeal the High Court’s findings on the need for a positive step to avail of the exemptions in the Directive, the conflict between the President’s immunity and the Directive and the Directive prevailing over the presidential immunity. The State appealed directly to the Supreme Court on the grounds that the application raises several issues of general public importance and in the interests of justice. This is known as “leapfrogging” above the next Court; the Court of Appeal.

RTK did not oppose the application but sought to cross-appeal the decision of the trial judge with regards to the Council of State. RTK argued that all the issues should be determined by the Supreme Court and the question as to Ireland’s option to transpose the relevant exclusion in the Directive should be referenced to the Court of Justice of the European Union.

The Supreme Court was satisfied that the issues both sought to be appealed and those sought to be cross-appealed were of general public importance and met the threshold. The Court also considered: “the issues would be narrowed no further by an appeal to the Court of Appeal in the first instance, as they are wholly matters of law”. In addition to the issues considered by the High Court, the Supreme Court will also consider whether the President is a “public authority” for the purposes of the Directive. That is, regardless of whether an exclusion applies.

This case raises complex questions on the interaction between constitutional and EU law. Much EU legislation provides for exclusions, and it will be interesting to interpret this more widely to see whether transposition legislation must address this. Access to information is becoming an increasingly hot topic, particularly in the area of environmental activism and policy, where the relationship between state bodies and other actors may be opaque.

If the Court dismisses the appeal, the Commissioner will need to decide whether information on the President’s speeches must be disclosed. It may also leave other information held by the President, not relating to his judicial or legal functions, in the line for being disclosed if further requests are made. In a time when we are seeing a proliferation of environmental challenges, it will be interesting to observe how these new challenges may have an effect on our body of constitutional law.

For more information on successfully obtaining planning permission for your projects, contact a member of our Construction, Infrastructure & Utilities team.