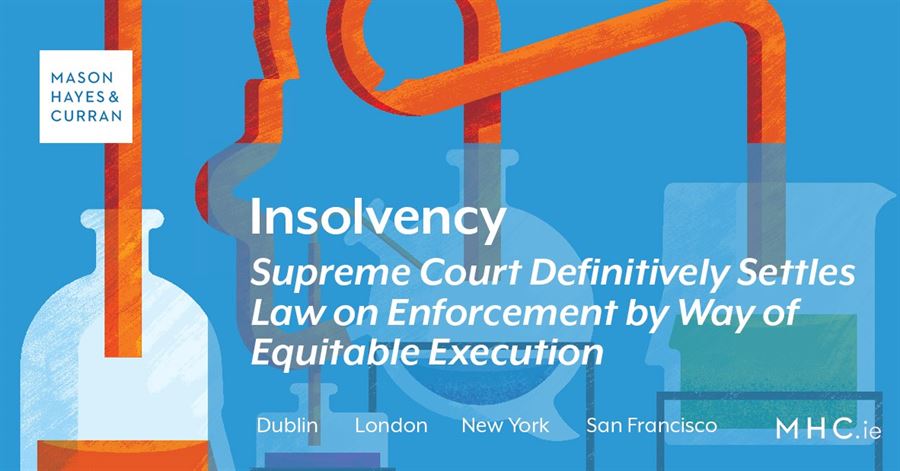 The appointment of a receiver by way of equitable execution has generally been considered a “remedy of last resort”[1] and, for over a hundred years, courts have expressed differing views as to when such a receiver could be appointed.

The decision of the Supreme Court in ACC Loan Management DAC v Rickard[2] clarifies the position in Ireland.

ACC obtained judgment against the defendants on 25 February 2011.

In October 2011, the High Court appointed a receiver by way of equitable execution over payments that might be received by the first defendant pursuant to the Single Farm Payments Scheme.

At the end of 2014, the Single Farm Payments Scheme was replaced with the “Basic Payment Scheme” (“BPS”) and the Department of Agriculture took the view that it had no legitimate basis to remit sums due to the first defendant under that scheme to the receiver.

ACC succeeded in a contested application to vary the October 2011 order appointing the receiver to encompass the payments under the BPS.

That was appealed to the Court of Appeal,[3] which upheld the order and the Supreme Court decided to hear a further appeal, finding that issues of public importance arose.

The Supreme Court engaged in a detailed examination of the provisions enabling the appointment of such receivers.[4] It examined the conflicting case law, both Irish and English, which has evolved since 1877, relating to those provisions. Ultimately, it made a clear decision that it was appropriate to interpret those provisions in light of present circumstances.

Accordingly, it found that such a receiver can be appointed:

The Court noted that:

The appointment of a receiver by way of equitable execution remains an option of almost last resort. However this judgment will be welcomed by creditors as it confirms that receivers can be appointed, where it is just, over most interests that are not readily reached by other means.

[3] MHC article on the Court of Appeal decision is available here.

Insolvency Update: A Change of Corporate Form Does Not Impact Litigation