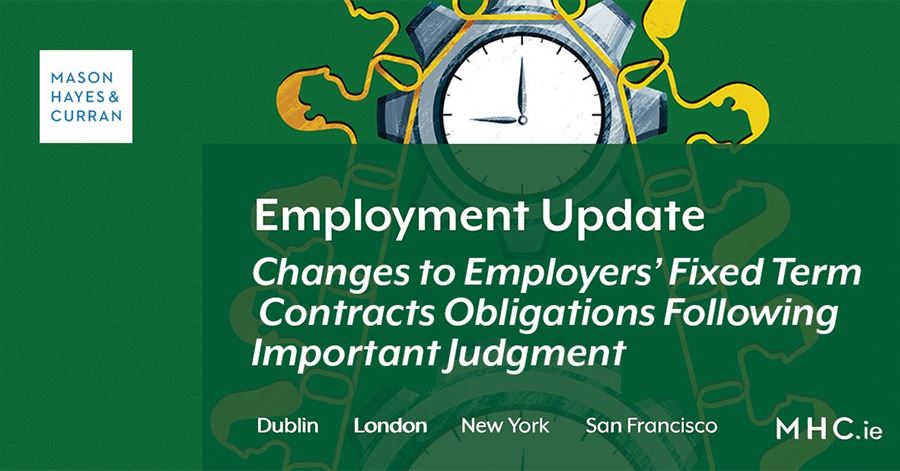 A recent case before the High Court involved the Board of Management of Malahide Community School and a teacher. The teacher brought a claim for unfair dismissal against the school following the expiry of a fixed term contract without it being renewed.

We highlight the aspects of the judgment that employers need to be aware of.

No fixed term contract where contingencies are present

The fixed term contract contained two contingencies relating to its possible renewal; these related to hours and to satisfactory service.

Judge Simons held that by its nature a renewable contract was not certain and consequently could not be categorised as a fixed term contract.

Informed consent is required for a waiver

It is important for employers to ensure that any existing employees who enter into a fixed term contract obtain independent advice before signing their contract to this effect. Decisions of both the High Court and the Labour Court have previously held that legal or union advice, depending on the nature of the contract, is sufficient and fulfils the independent legal advice requirement.

Waiver exists at the commencement of a contract

Judge Simons re-classified section 2(2)(b) of the Act as a waiver and not an exclusion.

The timing of a waiver is of crucial importance. Judge Simons held that for a waiver to be valid, prior informed consent must be obtained in advance. He emphasised that it applied “at the commencement of employment”. A waiver cannot be retrospective.

This decision applies only when an existing employee is offered and accepts a new fixed term contract by their employer. Such a scenario is more likely to occur in the public than in the private sector.

A positive outcome of this decision for employers is that this judgment will reduce their risk. Once an employee has obtained informed consent and signed their fixed term contract, the employer will no longer be vulnerable to claims of abuse of section 13 of the Act.

If you would like to discuss the potential impact of this decision, please contact a member of our Employment & Benefits team.