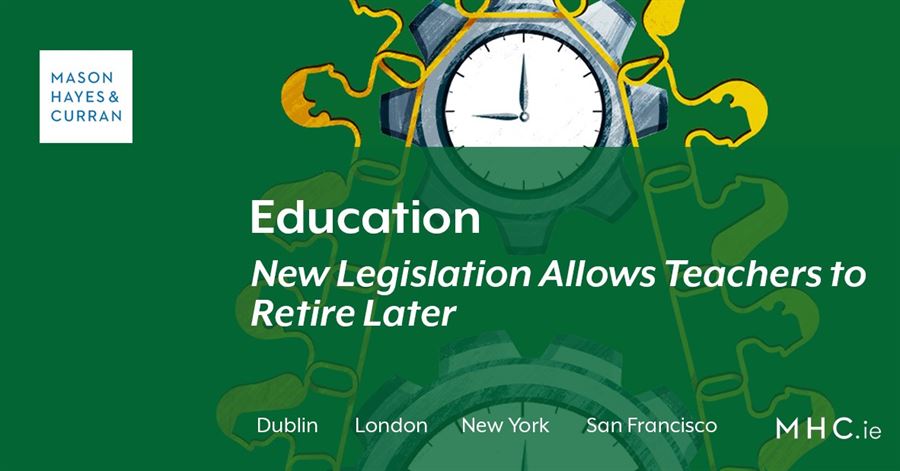 Many may have missed it given the date, but on 26 December 2018 President Michael D. Higgins signed the Public Service Superannuation (Age of Retirement) Act into law. The legislation takes effect from that date and increases the maximum retirement age for a large cohort of teachers in recognised schools, Education and Training Board schools, and other publicly funded schools.

What does the legislation say?

Now, under the new legislation, eligible teachers who were recruited before 1 April 2004 can also continue in employment up to a maximum age of 70. This affects all eligible teachers who had not reached the compulsory retirement age of 65 before 26 December 2018. However, teachers who have already availed of interim arrangements - where they have retired and been rehired for a one year period to bring them to the current State pension age - will not be affected by the new provisions and will not be eligible for the extended retirement age.

Teachers working up to the new compulsory retirement age will continue to accrue retirement benefits during that service period, up to a maximum of 40 years’ service. However, teachers continuing in service beyond that 40 year maximum will continue to pay pension contributions as normal.

No change for previous retirees

Under the new legislation, the Minister for Public Expenditure and Reform was tasked with preparing a report to the Oireachtas within three months of this new Act’s passing to deal with any teachers who were forced to retire between 6 December 2017 and the commencement of the new Act. The report would focus on instances in which teachers had reached the then compulsory retirement age of 65 and what potential remedies would be available to assist that group of workers. That report has now issued and proposes no further legislative or other changes for this group.

It is important to remember that the new retirement age is a maximum, and teachers are not obligated to work longer than they may have already planned to. The option to retire before age 70 is still open to teachers. Equally, the requirement for teachers to meet necessary standards of health and performance for continued service remain in place.

Principals and members of school management are encouraged to engage in early and structured discussions with teachers and other staff in order to gauge individuals’ plans for retirement in light of the new legislation and compulsory retirement arrangements.

This new legislation ensures that the vast majority of relevant public servants, including teachers, now have a common compulsory retirement age of 70 years of age. It is still a maximum, and teachers may opt to retire before age 70. Importantly, this optional extended service will still attract accruable service for pension purposes, up to a maximum of 40 years’ service.

School management are encouraged to engage with teaching staff in relation to their retirement intentions in a timely, structured and strategic manner. Indeed, engagement is encouraged with all staff, not just those affected by this legislation. A clear understanding by both employee and employer of each other’s intentions should help to provide for a positive retirement experience for both.

For further expert advice on the potential impact of the new legislation on members of your staff, contact our Education Law team.