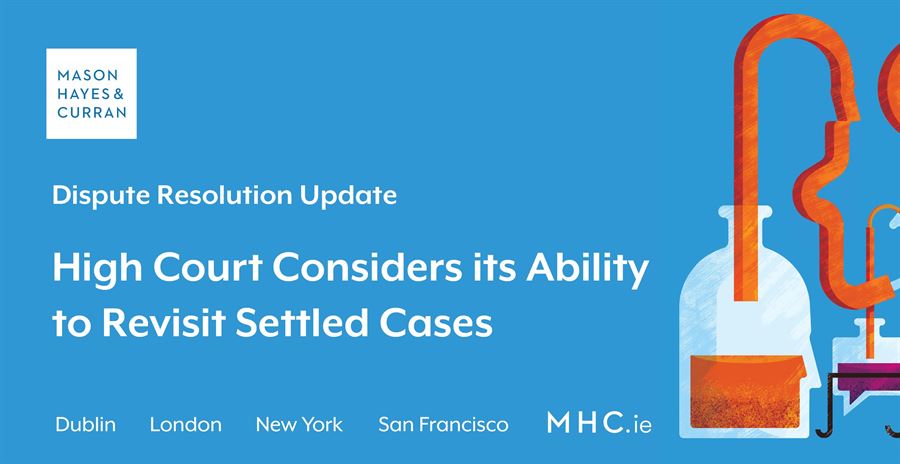 The High Court has recently considered the circumstances where a case, although settled on agreement by both parties, may be brought before the court again at a later date.

This case arose out of a detailed settlement agreement entered into in July 2018 following mediation where both parties agreed to the case being struck out. The dispute arose from a partner leaving a solicitors’ practice and how the issue of legal costs owed to the original firm for the transferring cases would be resolved together with several other partnership issues. Ms Justice Costello, when striking out the proceedings, received the settlement terms and allowed the parties to make further applications to the court as might be necessary to enforce the settlement agreement. In 2019, the plaintiffs brought such an application.

MBLLF argued that the order striking out proceedings in 2018 rendered the court functus officio. Functus officio essentially means that, as the court had already performed its function regarding the case, it was prevented it from dealing with the matter any further. Having already made a determination in the case, they argued the matter was finalised. They suggested fresh proceedings would therefore be required to enforce the settlement agreement.

Judge O’Connor having reviewed in detail the relevant legal authorities and case law, rejected the need for fresh proceedings and held that the recent trends in Irish courts demonstrate “the willingness of the courts and practitioners to administer justice effectively, without delay and with a view to minimise expense. . . “

SMDF commenced proceedings against the defendants in December 2009, alleging breach of contract, negligence and breach of duty. The parties entered into a settlement agreement in 2011 agreeing that the defendants would make staged payments to SMDF. In the event of default, SDMF were allowed to bring an application before the court seeking judgement for the outstanding balance. A High Court order (the 2011 order) was also made providing that the proceedings were “struck out with liberty to re-enter”.

The defendants defaulted and in June 2019 SDMF brought an application seeking judgment for the outstanding €4.9 million.

It was argued that the wording of the 2011 order rendered the court functus officio. Mr Justice McDonald having reviewed the relevant case law, including the decision in Carthy, considered that striking out proceedings does not always render the court functus officio. The fact that the 2011 order granted “liberty to re-enter” implies that the parties did not intend to entirely conclude the proceedings and “clearly envisaged a potential future role for the court”.

However, the Judge held that this could not mean that the parties intended that the proceedings would be re-entered for the purpose of re-litigating the original claim and noted that it would be “inconceivable that the court would permit parties to proceed in that way in the absence of some detailed explanation”. The Judge concluded that the 2011 order allowed for applications insofar as necessary to recover any defaulted balance.

These cases demonstrate the courts’ willingness to facilitate the re-entry of proceedings to determine matters in dispute but the courts will rightfully not allow parties to re-litigate the matter in its entirety.

This also illustrates a desire to use valuable court resources to best effect. Lawyers, when drafting settlement terms, should be very careful to ensure that a specific right is reserved to re-enter the proceedings before the court in the event of breach of the settlement proceedings and to stipulate the type of default order required.

For more information on revisiting previously settled cases, contact a member of our Dispute Resolution team.