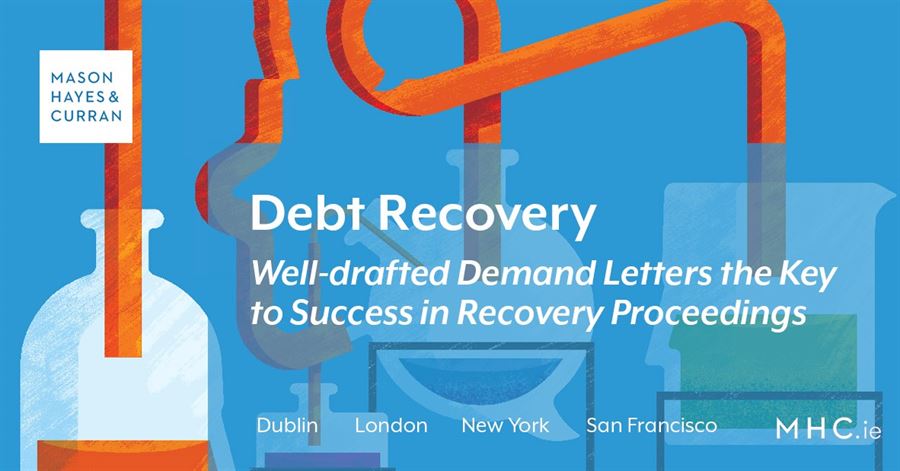 Demand letters are a well-established precondition to most debt-recovery proceedings, especially when the creditor is a lender seeking to recover on foot of a loan agreement or facility letter. Two recent cases have highlighted the importance of an appropriate demand letter when seeking to recover a debt or enforce security, particularly where the terms of the original contract call for or attach specific conditions to a demand.

Pay attention to the original contract

Obviously when determining whether a demand letter is necessary, and whether there are specific requirements in relation to the demand, it is crucial to look to the contract between the parties.

In Allied Irish Banks Plc v Patrick McCabe,[1] the mortgage required the prior written consent of AIB Mortgage Bank before any steps to enforce the mortgage could be taken. This was despite the fact that the only monies advanced were from Allied Irish Banks plc. Two letters of demand were issued prior to obtaining the written consent of AIB Mortgage Bank. Mr Justice Garrett Simons found neither letter amounted to a valid demand as they did not comply with the requirements of the mortgage. The proceedings were not struck out as a third letter had issued after the consent of AIB Mortgage Bank plc was obtained and before the proceedings were commenced. Owing to this third letter, the Court ruled in favour of Allied Irish Banks Plc, finding it to be entitled to the order for possession sought. Had this third letter not existed though, one presumes they would have been struck out.

The requirements of the original mortgage in the context of the contents of the demand letter were also emphasised in French O'Carroll v Permanent TSB plc & ors.[2] In this case, which involved two separate loans, the borrower disputed two demand letters on the grounds that the first only referred to the arrears and not the full sum due, while the second demanded the full sum without specifying the amount due under each separate loan. In dismissing these arguments, Ms Justice Ní Raifeartaigh deemed the second letter to satisfy the necessary conditions as there could have been no doubt that it was the full amount owed that was being called for. On the facts of this case, no letter of demand was found to have been required before the appointment of a receiver once an event of default had occurred. However, the arguments put forward by the defendant and the attention paid to the letters by the Court reminds us of the value of a well-drafted demand.

The potential consequences of even minor errors in demand letters can be very unfavourable. An error in the address of the demand letter, coupled with the Defendant’s sworn evidence of non-receipt, in ACC Bank Plc v Ruddy,[3] led to Mr Justice Moriarty accepting that a demand had not been received, and consequently a cause of action had not arisen. Ultimately, the result of this error was that the proceedings were struck out, despite the court’s recognition that there was no doubt as to default on the part of the defendant.

Creditors would do well to note the recent attention paid by debtors and the courts to demand letters, especially given the potential consequences of an inadequate demand. In order to avoid demand letters being challenged by debtors, increased costs as a result of proceedings being sent to plenary hearing or, worse, being struck out, a well-drafted demand, issued at the correct time, is essential where the terms of the contract necessitate one.

For more information on the optimal drafting of demand letters, contact a member of our Debt Recovery team.