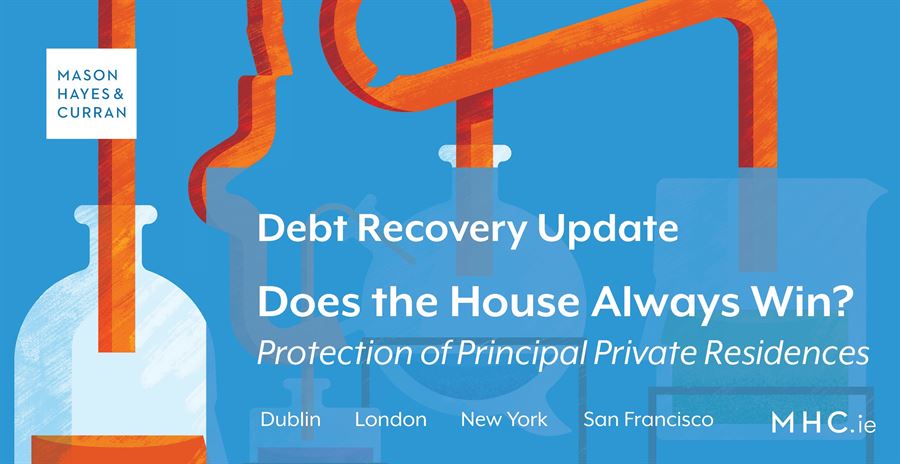 The Personal Insolvency Act 2012 was enacted with the aim of throwing a lifeline to debtors, many of whom may be in arrears on mortgage loans secured against their principal private residence.

The recent case of Tanager v Ronan Ryan and Pamela Flood illustrates how the objectives and policy behind the 2012 Act are profoundly respected by the courts today. To that end, it seems that the Courts are closely following the policy direction of the Oireachtas, which has sought to facilitate the debtor’s right of access to the personal insolvency regime, in many of its recent enactments.

Initially amid many calls for the reform of the personal insolvency regime in Ireland, the 2012 Act offered a beacon of hope to debtors during the recession. It has the underlying objective of achieving an orderly debt solution, especially for secured debt, in the interest of the common good. Those debtors who are able to meet the criteria set out are afforded a protective certificate to facilitate the making a personal insolvency arrangement. The 2012 Act has been amended in the years following its enactment to include, for example, a right of appeal to the Circuit Court on a personal insolvency arrangement that had been vetoed by a creditor.

In the Ronan Ryan case, the creditor Tanager had claimed that a protective certificate obtained by Mr Ryan should be set aside. Tanager’s application was made on the grounds that Mr Ryan did not disclose the existence of an order for possession over his family’s principal private residence when applying for the certificate. Tanager also stressed the consent nature of the order for possession and claimed that Mr Ryan should not be allowed to “go behind” this consent. However, Mr Justice Simons ultimately refused Tanager’s application and upheld the protective certificate.

Mr Justice Simons found that it was “unsatisfactory” that Mr Ryan had not disclosed the existence of the order for possession order, to the Circuit Court at the time of his seeking that protective certificate. However, he deemed it not to be a “material non-disclosure’’ and noted that Mr Ryan would have met the eligibility criteria set down under section 91 of the 2012 Act. He deemed the refusal of the protection of a protective certificate to be disproportionate to the gravity of that non-disclosure. He also pointed out that permitting Tanager’s application, in those circumstances, would be inconsistent with the objectives of the 2012 Act (as amended).

Under section 96(1)(d) of the 2012 Act, a creditor is not entitled to execute or enforce a judgment or order against the debtor. One of the arguments put forward by Tanager rested on the fact Mr Ryan had consented to an order for possession. Tanager claimed that the application for a protective certificate was used to ‘derail and undermine the efficacy’ of the order. However Mr Justice Simons took the stance that the aim of the legislation is to provide rational and orderly debt solutions in the interest of the common good. He recognised that in cases like this one, that would mean precluding a creditor who has the benefit of a court order, or even a consent order, from enforcing it.

Mr Justice Simons found that the 2012 Act (as amended) is based on a public interest policy which aims provide for debt resolution in the interests of the common good. This seems to be particularly the case where there are, what Mr Justice described as, “innocent third parties” i.e. Mr Ryan’s children, involved. He also noted the position of other creditors who might fare better in a personal insolvency arrangement – as proposed by Mr Ryan, rather than a possible bankruptcy.

The debtor’s right to avail of rational and orderly debt solutions offered by the Irish personal insolvency regime is at the heart of both the 2012 Act and recent amending legislation. This can also be seen in legislation such as the 2013 and 2019 Land and Conveyancing Law Reform Acts.

These rights and the interest of the common good seem to be the driving force behind the judgment of Mr Justice Simons in the Ronan Ryan case. However, while reform of our personal insolvency regime was required, it is possibly the case that the balance may soon be tipped too far against the interests of the creditor.