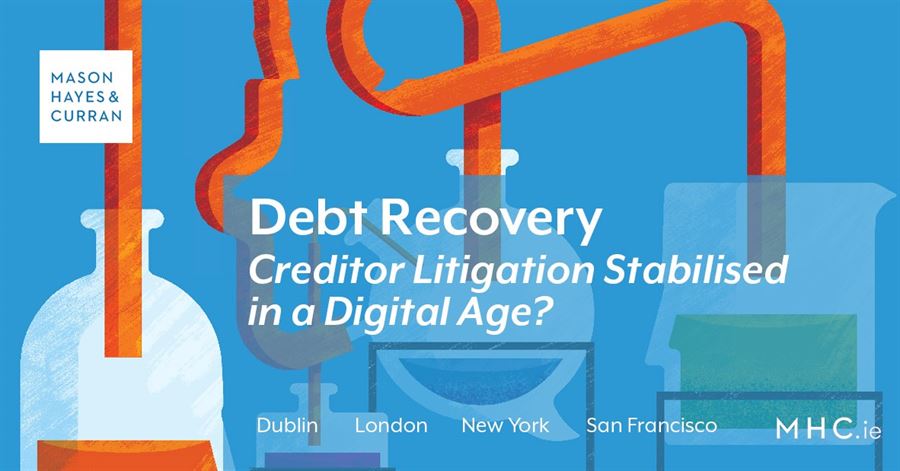 The recent publication of the Courts Service Annual Report 2018 highlighted on-going economic and societal changes by way of hard data. In his Foreword to the Report, Chief Justice Frank Clarke references our digital age, noting that “people are used to round-the-clock online access to services”. He adds that the courts “must deal with the twin challenge of facilitating such access while at the same time ensuring that the court process is secure and that cases are allocated the time and consideration they require”.

In a recovering economy, court users can take some solace from the fact that the resources and funding received by the Courts Service has increased in the past couple of years. This has facilitated much needed modernisation, as noted in the Report.

In the debt recovery litigation and enforcement sphere, the Report goes on to confirm certain trends visible in the wider economy as identified in previous Courts Service Annual reports.

One obvious means of tracking debt activity in the courts is by way of the numbers of monetary judgments obtained against debtors, in default of appearance or of defence. We had previously noted here and here that these had fallen dramatically, from a peak back in 2010. Creditors obtained 11,689 of these judgments in 2018 compared to 9,637 in 2016. However, on a closer analysis, the numbers of default judgments in both the High and Circuit Courts continued to fall, with the rise on the 2017 equivalent being only reflective in the District Court figure.

This may suggest though that care has been taken in post-recession credit extensions by banks and businesses, with such credit to new customers not being provided for amounts over €15,000, the upper end of the District court monetary jurisdiction.

This levelling out in overall default judgments, can also be seen in other areas of enforcement. The Report notes that there was just an 8% drop in the publication of judgments year on year, as well as a 12% decrease in the number of instalment order applications issued in 2018. This occurs where a creditor applies to the District Court for an order compelling the debtor to pay the debt by fixed instalments.

Finally, the total number of judgment mortgage certificates signed by the Irish Courts in 2018 stood at 2,762 representing a 18% decrease on the 2017 equivalent. These decreases, whilst indicative of an on-going trend, are still not as pronounced as those of previous Reports.

The trend towards a small drop/levelling off in collection and enforcement activity can also be seen in general insolvency cases, where, for example, the Report notes that 382 debtors issued petitions to declare themselves bankrupt in 2017. This compares to to 545 in 2017, and 559 in 2016. Creditors issued some 55 petitions in 2018, a small increase on the 47 in 2017. Similarly, the figure for creditors commencing bankruptcy via a bankruptcy summons, rose more dramatically - 105 summonses in 2018, as against 68 in 2017. However, there is a sense that more creditors were availing of bankruptcy as the “last-resort” option, against particularly uncooperative debtors before finally closing off the cases.

Perhaps more notably, there was a more significant decrease in applications to the courts for the various debt resolution arrangements available under the Personal Insolvency Act 2012. In total in 2018, the Report notes that the High and Circuit Courts dealt with 984 such applications, compared with 2,445 in 2017.

Perhaps not surprisingly, in a year dominated by the conclusion of tracker mortgage reviews by many of the country’s lenders, figures for court activity on residential mortgage enforcement also declined. We had previously highlighted that in order to get an order permitting it to repossess a defaulting customer’s Principal Dwelling House (PDH), a creditor has had to issue proceedings in the Circuit Court. This led to a surge in these cases, particularly in 2014.

The number of new cases commenced dropped to 2,179 in 2018, the lowest it has been since the commencement of the 2013 Land and Conveyancing Law Reform Act. Similarly the number of actual orders for possession (made by the Circuit Court) fell from 878 in 2017, to 700 in 2018.

Obviously, 2018, also saw the completion of significant sales of residential mortgage loan portfolios by lenders. Regulation of international investment funds, who have purchased such portfolios, has also been increased. Although the level of mortgage arrears in Ireland has dropped over the past five years especially, there remain many unresolved cases of long-term arrears that will invariably give rise to repossession applications, so these figures are likely to rise. This is especially so, given the facts of increased portfolio sales and the completion of tracker mortgage investigations by Irish lenders.

Like its 2017 predecessor, the 2018 Report has noted that the volume of creditor litigation and enforcement has fallen, but not at a rate that has been as dramatic as previous years. There is increased availability of tools and services to monitor the extension and maintenance of credit, in this digital age.

Nonetheless, an overall unwillingness to extend credit in the banking and business sectors is demonstrated in collection and enforcement figures over the past five years or so. The fact that this seems to have levelled out generally following the end of the recessionary years, and is now being followed by a small increase in judgment activity at District Court level, indicates a recovered economy. This aligns with the natural time lag between this type of credit activity in the real economy and its consequent appearance in the legal system.

Undoubtedly, both that economy and wider society will continue to change significantly, which will be reflected in future Reports.

For more information and expert legal advice on creditor litigation, contact a member of our Debt Recovery team.