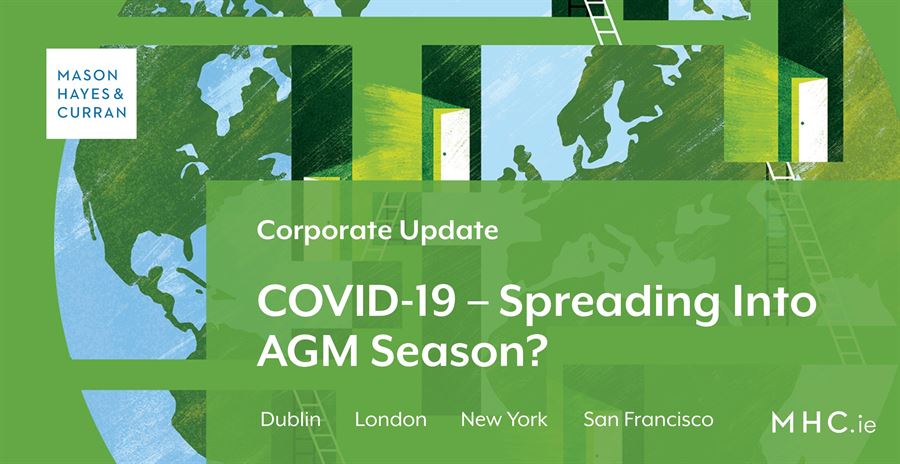 With AGM season nearly upon us, PLCs are considering the impact of COVID-19 on their 2020 Annual General Meetings (AGMs). We look at the options available to listed companies where shareholder participation in an AGM may require to be restricted due to the desire to limit the spread of COVID-19.

The requirement to hold an AGM

Every Irish company must hold an annual general meeting of its members (AGM) within 15 months of its preceding AGM. A private limited company has the option to dispense with the holding of an AGM where its members pass a unanimous written resolution dealing with the business of the AGM for that year. This option is not available to PLCs, many of which will have large shareholder bases and, in many cases, well-attended AGMs.

Virtual meetings are not permissible under Irish law. The Companies Act 2014 does not contain an equivalent to section 360A of the UK Companies Act 2006 which is viewed by many as permitting fully virtual meetings by UK companies. Hybrid general meetings are however permissible, i.e. a physical meeting that facilitates members to participate by electronic means. Such a meeting can be held in one or more locations, either inside or outside the State.

In anticipation of possible restrictions on travel or public gatherings as COVID-19 continues to spread, it makes sense for companies to consider making arrangements to facilitate electronic participation by members at upcoming AGMs. The requirement is that members must be able to vote and speak at the meeting, so companies will need to ensure that appropriate technology is available. It is important that the chair of the meeting is able to identify who is present, which may not be straightforward when a shareholder is participating electronically. The technology should be tested in advance to ensure that all glitches are identified. Clear instructions on how to participate electronically should be contained in the Notice of AGM.

Can members be prevented from attending AGM in person?

As virtual meetings are not permissible under the Companies Act 2014, the company has no intrinsic power to ensure that shareholders do not attend the physical AGM, although the recommendation should be that all shareholders avail of the electronic participation option. It remains to be seen whether there will be any official measures to restrict travel or public gatherings. These may have the effect of forcing shareholders to avail of the electronic participation options as the only available means of participating in the AGM.

What if a Notice of AGM has already been dispatched?

Where an AGM has already been scheduled and there is insufficient time to ensure that appropriate technology is in place to allow electronic participation then, depending on how the COVID-19 situation develops, the meeting may need to be adjourned. In order for a general meeting to be validly adjourned, as a formal matter the meeting must still be commenced in order to be adjourned. The company should engage with members prior to the scheduled meeting to ensure that the shareholders consent to the adjournment at the meeting. Companies should also review the provisions in the company’s constitution on the procedure for adjournments.

Practical consequences for a company where AGM not held

A public company typically seeks a number of authorities annually from its shareholders which expire on the earlier of the conclusion of the company’s AGM in the following year or the date falling 15 months from that general meeting. In the case of a listed PLC, such authorities generally include share allotment authorities, share buy-back authorities and authorities to call extraordinary general meetings on short notice. Where the AGM does not proceed within the 15-month statutory window then existing authorities will typically expire, which may impact the capital raising plans of the company for the year ahead.

In compliance with the UK Corporate Governance Code, the constitutions of most listed PLCs provide that directors must retire annually and submit themselves for re-election at the next AGM. There is case law which supports the proposition that where a company fails to hold a general meeting within the permitted time period, then any directors who were due retire and submit themselves for re-election will cease to hold office. This would have very serious governance implications for companies where it transpires. While the constitutions of most private companies will disapply requirements for the retirement of directors by rotation, it may be a legacy issue for any private company whose constitution follows the old Table A and which was not updated when the Companies Act 2014 came into effect.

As the AGM season for PLCs gets underway, it is advisable that companies start making the necessary arrangements to facilitate electronic participation in upcoming AGMs. While company law does not assist a company in preventing a shareholder from asserting his or her right to attend the physical AGM, we anticipate that common sense (or government intervention) will prevail to prevent shareholders gathering where adequate alternative means have been made available.

For more information on the likely impact of the continued spread of COVID-19 on your organisation, contact a member of our Corporate or Corporate Governance & Compliance teams.