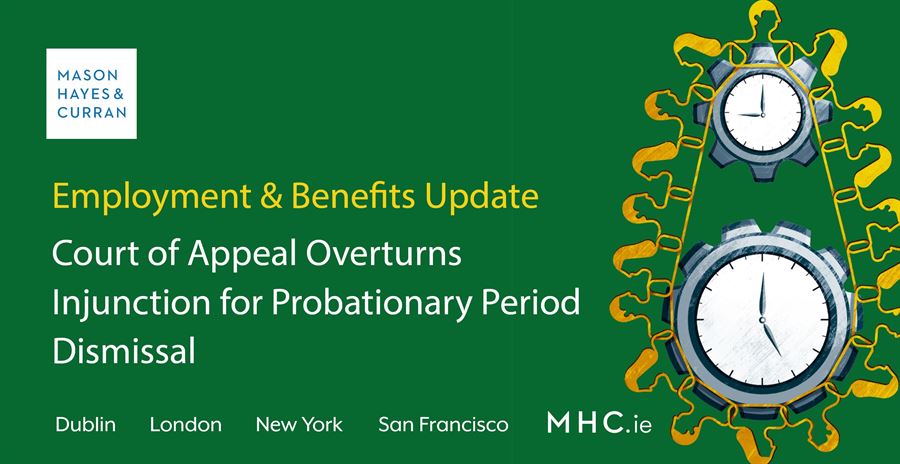 In a recent judgment in the case of Donal O’Donovan v Over-C Technology Limited [1], the Court of Appeal allowed an appeal against an injunction granted to an executive whose employment as CFO had been terminated on the basis of poor performance during his probationary period. The Court found that the High Court failed to attribute appropriate weight to the fact that the termination had occurred during a contractual probationary period. The court also held that, unlike dismissals on the ground of misconduct, the principles of fair procedures and natural justice were not applicable to dismissals for poor performance.

It is well established that where there are allegations of misconduct against an employee, they have a right to fair procedures before any adverse findings are made, or before their employment is terminated for misconduct. Although the executive claimed that his dismissal at least partly related to misconduct allegations, both the High Court and the Court of Appeal held that the dismissal was related to performance reasons only.

The Court of Appeal rejected this. Having examined numerous authorities, it restated two clear principles, as follows: “Firstly…that an employer can terminate employment for any reason or no reason, provided adequate notice is given. This applies whether or not the dismissal occurs during the probationary period. Secondly…that the principles of natural justice apply to cases involving dismissal for misconduct, but not to termination on other grounds.”

Acknowledging that the line between poor performance and misconduct can be a thin and/or fuzzy, the employer must be clear in its communication around the basis for dismissal. This is also important if they opt for what is described as a “no fault” termination.

The Importance of a Well Drafted Probation Clause

The employer relied in this case on the probation clause in the contract of employment which expressly referred to performance being assessed during probation and to the right to terminate employment if performance was not up to the required standard.

The court acknowledged that although no implied rights to fair procedures arise in performance related dismissals, the employer may confer express rights on the employee to such fair procedures, generally in the form of a disciplinary procedure.  It is crucial to review and update your probation clause in your template employment contracts to make it clear that any contractual obligation to provide fair procedures does not apply to an employee on probation.

The High Court decision had raised considerable concerns among HR practitioners and lawyers alike, as it significantly raised the stakes around dismissing an employee during probation. Such concerns are no doubt alleviated following this Court of Appeal judgement, but terminating employees before the “magic” one year mark, when unfair dismissal rights generally kick in, must still be handled with care. Terminating after probation, but before one year, can bring some of the issues discussed in this article back into play. Other claims do not require one years’ service.