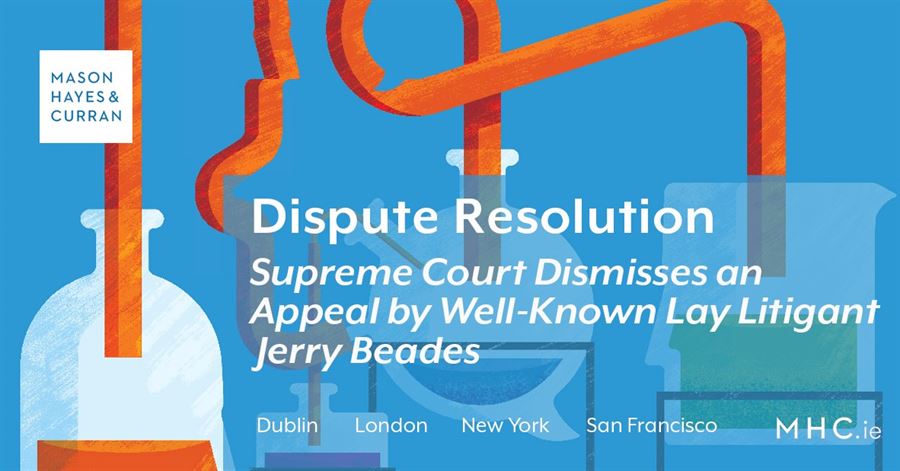 On 29 July, the Supreme Court dismissed an appeal by Jerry Beades against a judgment granted in 2012. The Court confirmed that lenders do not need to rely on the Bankers’ Books Evidence Act to prove a debt and suggested a need for legislative reform concerning the treatment of evidence in civil proceedings.

Bank of Scotland plc (Bank) issued proceedings against Mr Beades to recover €9.6 million, which Bank of Scotland (Ireland) Limited had loaned to him prior to its merger with the Bank in 2010.

Mr Justice Kelly gave judgment for the Bank in the High Court, noting that Mr Beades did not deny receiving and benefitting from the monies advanced and did not put forward any arguable defence to the claim.

The Supreme Court commented that while Mr Beades “studiously sought to avoid acknowledgement of the facts, such matters as he did address made it clear by inference at least, he had received the monies in question” . It found that the High Court correctly applied the test on an application for summary judgment and was entitled to conclude that Mr Beades did not put forward an arguable defence.

Mr Beades argued that there was no admissible evidence to ground the Bank’s claim. In particular, he argued that an employee of Certus, a service provider of the Bank, could not give evidence of indebtedness under section 4 of the Bankers’ Books Evidence Act 1879 (as amended) (BBEA).

The Court made it clear that:

The Court commented that a 1965 decision of the House of Lords[2] regarding business records, which was almost immediately reversed by statute in the UK, has remained in Ireland, “although its effects are almost always unhelpful to the fair resolution of cases”. The position has been resolved by statute in respect of criminal proceedings,[3] but remains in civil proceedings. In this regard, the Court appeared to endorse the recommendations of the Law Reform Commissions’ 2016 report on the consolidation and reform of aspects of the law of evidence.

This judgment will be welcomed by creditors who engage credit servicing firms to manage loans. It reiterates that any person, such as an employee of a service provider, can give evidence of a borrower’s indebtedness, if they can swear positively to the facts showing that the creditor is entitled to the relief claimed.

Separately, the Supreme Court’s endorsement of the Law Reform Commission’s report on the consolidation and reform of the law of evidence may increase the priority afforded by the legislature to consideration of that report.