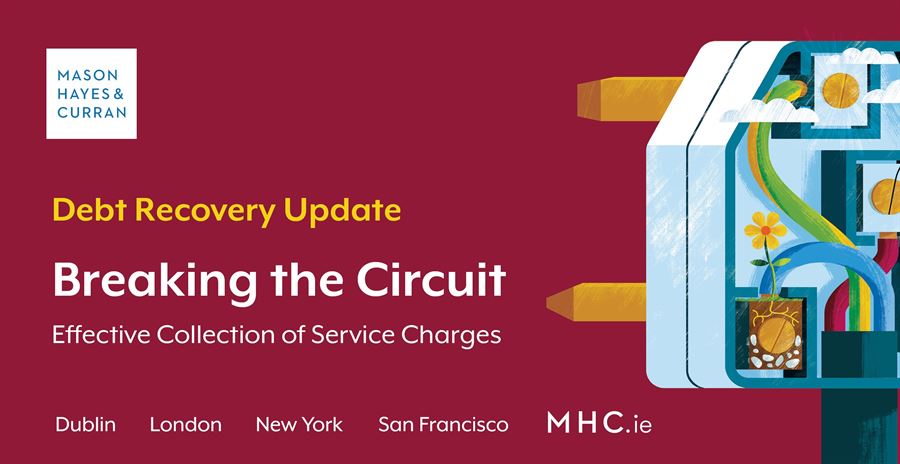 Multi-unit developments, typically apartment complexes rely on owner management companies (OMCs). How and to what extent an OMC is funded is crucial.

Most OMCs are financed by contributions from their members, typically each owner who owns a unit in the development. The annual fee, or service charge, paid by each member, provides the cash flow that the OMC needs to provide the necessary services and maintain the development, particularly the development’s common areas.

What happens when the members don’t pay their service charges?

A perennial problem that faces OMCs is the non-payment of those annual service charges. Non-payment was referred to in a recent independent report jointly commissioned by the Housing Agency and Clúid Housing (the Report)[1].

Unlike trading companies, OMCs have a fixed customer base – its membership/unit owners. Usually, service charges are based on a budget approved by an annual general meeting of the membership and apportioned per member. Where a member does not pay their annual service charge, then it makes it very difficult for the OMC to fund all of the services. Typically, these services include repair/maintenance and cleaning of common areas, electricity for common areas, gardening, refuse collection, block insurance and professional charges. Non-payment frequently means that all services cannot be provided, for cash flow reasons. In turn, this can cause members to refuse to pay their own service charge, causing the standard or quality of services to fall further.

The inability of the OMC to fund professional charges for debt collection may also cause members to believe there is no legal sanction for non-payment, which can further exacerbate the situation. It often happens that where there is default in a given year, then the compliant members will be asked to fund the shortfall in the following year. Non-payment and its knock-on effect on services provision is a vicious cycle.

What is usually done to oblige members to pay?

There are a number of sanctions that the OMC can seek to impose upon non-paying members, such as:

Some of these penalties may depend on the terms of contract/lease in question, but in reality it is practically and legally very difficult to deny services to non-paying members.

Some OMCs may seek to name and shame non-paying members, for example by publishing a list of delinquent members at the OMC’s AGM, though obviously GDPR issues may arise. Separately, the non-paying member may also be denied the right to vote at those AGMs, though this sanction is rarely successful.

Traditional debt enforcement through the legal system is often not an effective remedy for the OMC. Unlike the delivery of goods annual service charges are a recurring debt, owed by the member to the OMC. If an OMC sues a member for the arrears of service charges, the next annual charge may well have fallen due by the time the OMC obtains judgment. The OMC may then face the scenario of starting litigation once again for those new charges. Also, service charges are deemed to be contract debts[2] and as such are subject to the Statute of Limitations 1957. This means that the annual service charges may become statute-barred and legal action may not be possibl. This occurs after 6 years from the time when they became due, unless there is a written acknowledgement from the debtor or a part-payment in the interim.

Indeed, often the best opportunity for payment of arrears of service charges is on sale of the unit by the owner, as a new purchaser will not willingly buy the unit unless the service charge history is clean[3].

What happens in other countries?

The Report looks at the collection of service charges in a number of other jurisdictions. It suggests that Service charges owed to OMCs are seen as priority debt, elsewhere, unlike in Ireland. For example, in Finland, if a member does not pay their annual service charges, the Finnish equivalent of the OMC has the power to evict that member.

A similar, fairly draconian, power may also be exercised in the UK, as against owners who do not pay their service charges, they too, are effectively evicted, following the deemed forfeiture of their lease. Commentators note that the UK courts are generally more supportive of OMC rights, than their Irish equivalents.

Can anything more radical be done here?

The Irish government recognised service charges owing to OMCs as meriting special protection as “excludable debts” in the Personal Insolvency Act 2012,The government could re-categorise service charges as not being capable of being statute-barred, or to provide that subsequently- occurring service charges, can be later added into existing legal proceedings, before judgment.

Such recommendations have been made in the Report, which also advocates for the statutory establishment of a Regulator of OMCs (Housing Regulatory Authority). The Report also proposed that this Housing Regulatory Authority would have jurisdiction for all disputes arising involving an OMC, including those relating to service charges. This would avoid legal fees that OMCs might incur, in dealing with those defended cases, where the member claims that the services provided were inadequate. Invariably this is the most common ground of defence that we have encountered to service charge debt claims.

The implementation of some of the Report’s other recommendations would be hugely positive changes, for the financing of OMCs in Ireland such as:

Minister for Justice Helen McEntee, signaled in September 2020 that she intended to commence a review of legislation regarding OMCs “in the coming months”. Hopefully this will lead to some of the reforms suggested in the Report.

If OMCs are unable to collect service charges, it leads on to inadequate funding, lack of service provision and ultimately insolvencies in the sector. The developments that these OMCs manage have had to deal with legacy construction and financial issues, such as Priory Hall and Longboat Quay. Where a properly funded OMC is not present to deal with such issues, the fall-out will presumably otherwise revert to local or national government.

Non-payment of service charges is and is likely to remain a persistent problem for OMCs in Ireland. The measures advocated in the Report would greatly assist OMCs, particularly those changes that would make debt collection litigation more effective.

As part of Minister McEntee’s forthcoming review, we will hopefully see those measures become reality.

For further information contact a member of our Debt Recovery team.

[1] The Report was published in July 2019 and is titled “Owners’ Management Companies – Sustainable Apartment Living for Ireland”. The Housing Agency works with the Department of Housing, Planning and Local Government, local authorities, and approved housing bodies (AHB) in the delivery of housing and housing services. Clúid is the State’s largest approved housing body, managing just over 7,000 homes across the country.

[3] The prospective purchaser will check this point via what are known as MUD Act pre-contract enquiries. There are provisions in the Law Society of Ireland’s prescribed Requisitions that deal with MUD Act issues.