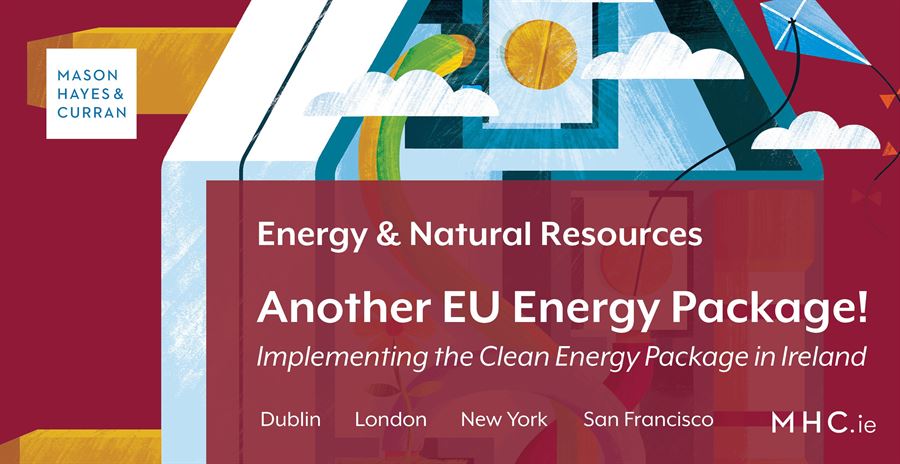 The European Commission introduced the Clean Energy Package (CEP) during the course of 2018 and 2019, which consists of eight separate legislative acts. The Commission noted that the finalisation of the CEP represented “a major step towards completing the Energy Union”. The majority of these acts have entered into force from January 2020.

The SEM Committee is the mechanism through which the energy regulators of Ireland and Northern Ireland cooperate for the purpose of regulating the Single Electricity Market (SEM). The SEM Committee has now produced an information paper setting out the areas in which changes need to be made to the regulation of the SEM in order to give full effect to the CEP. The SEM Committee indicated that changes are required in the following six key areas:

Currently under the SEM framework, only generators with a Maximum Export Capacity of 10MW or over are required to participate in the SEM Balancing Market. By contrast, under the CEP all market participants, with certain limited exemptions only, are to be financially responsible for any imbalances that they cause in the market. Where an imbalance is connected with an entity benefitting from an exemption, the Member State is required to ensure a financially responsible market participant shall cover these imbalances.

Numerous <10MW Irish energy generation projects, mainly small onshore windfarms, currently take advantage of the fact they are not required to participate in the SEM Balancing Market. Any significant erosion of this exemption can be expected to result in the incidence of higher costs for these projects. They also face the inevitability that commercial arrangements between these projects and their power off-takers may need to be reopened, so that these additional costs can be apportioned.

In an Irish context, the “contracts” that need to be concluded prior to 4 July 2019, in order to preserve priority dispatch, now need to be precisely identified. A number of potential approaches exist, and our Energy & Utilities team is aware that the SEM Committee has already received submissions from the Irish wind energy sector on this topic.

The CEP requires compensation for non-market based “redispatching” of firm generation, energy storage or demand-response facilities. Redispatching is defined in European law as “a measure activated by one or several system operators by altering the generation and/or load pattern in order to change physical flows in the transmission system and relieve a physical congestion.”

The SEM Committee’s task here will be to marry this definition with related concepts that are already features of Irish electricity grid operation, such as “curtailment” and “constraint”. Curtailment is a constant underlying concern in the context of Ireland’s rapidly growing renewable generation fleet, as the Irish grid seeks to accommodate the ambitious target of 75% non-synchronous generation. The SEM Committee had previously allowed a temporary regime of compensation for curtailment (which has now finished), and may need to reopen this decision in light of the requirement to compensate for non-market based redispatch. This issue is also likely to interact with Irish “priority dispatch” also.

The CEP requires updates to the calculation methodologies used in market parameters including the Value of Lost Load (VoLL), reliability standards and resource adequacy. These new methodologies are anticipated to be in place for the Irish T-4 capacity auctions scheduled for September 2020. The CEP further requires that imbalance periods be harmonised across Europe, to a common 15 minutes, by 1 January 2021. The corresponding period is currently 30 minutes in the SEM, and this has been the case since the ISEM market change in late 2018. The SEM Committee does not envisage compliance with this requirement by 2021 and has expressed its intention to seek an exemption or derogation.

The CEP prohibits capacity payments for generation facilities emitting above a certain level of CO2. This is set out by way of two time periods:

For context, a 2017 ESB report entitled “Ireland’s Low Carbon Future - Dimensions of a Solution” noted that combined cycle gas turbines typically produce between 350 and 380g of CO2 per kWh.

In its current form, Ireland’s capacity remuneration mechanism is still relatively new, having been only recently redesigned to accompany the ISEM market change. Any enforced reduction in the scope of the programme will be of concern to current participants, who will not necessarily take comfort from the cross-border participation initiatives that are also part of the CEP.

The CEP requires the development of Regional Coordination Centres to complement the role of transmission system operators (TSOs) in a prescribed geographic region. The SEM Committee noted that the geographic regions were to be consulted on by the ENTSO-E with a submission date of 5 January 2020. ACER has three months from this date to approve or amend the submission. Recent ENTSO-E proposals have grouped the Island of Ireland in with Great Britain for the purposes of defining regions. It remains to be seen whether such a grouping is viable in the medium term, in light of Brexit and any future negotiated deal – or lack thereof – between the UK and the EU.

The SEM Committee has clearly flagged the key elements of the work that will be required in the coming months in order to bring the SEM in line with the CEP.

Many Irish market participants will have only recently completed their contractual adjustment to I-SEM, which was introduced ultimately as a requirement of the EU’s Third Energy Package of 2009. However, European energy legislation does not sit still, and participants will now need to monitor the CEP-related actions of the SEM Committee in order to track whether further contractual adjustments will be necessary.

For more information on these developments, contact a member of our Energy, Utilities & Projects team.