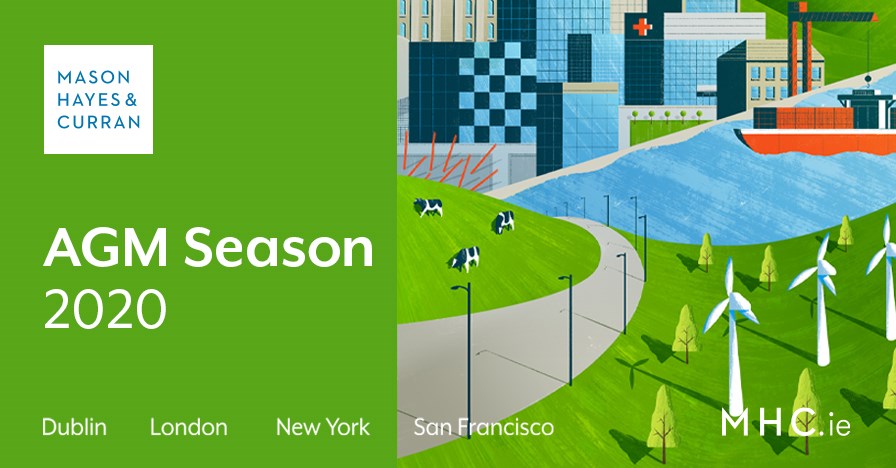 Business law firm Mason Hayes & Curran LLP has launched their AGM Season Report 2020, which provides in-depth analysis of the issues that have arisen at the annual general meetings of Irish-listed companies in the 2020 season. Now in its fourth year, the report this year reviews the types of AGMs that took place during the pandemic and the implications of these new formats for shareholders.

Commenting on the launch of the report, Anne Harkin, Senior Associate, Mason Hayes & Curran LLP, said “The 2020 AGM season has been unique. The impact of COVID-19 caused many AGMs to be postponed, live voting rights to be restricted, and changes to dividend and remuneration proposals. Companies also had to grapple with the logistics of their AGMs, taking into account public health concerns, while at the same time complying with the legislative and regulatory requirements that safeguard shareholder voting rights.”

According to the report, the global impact of COVID-19 began to be felt at the beginning of the traditional AGM season. Some companies proceeded with their AGMS under alternative arrangements with a restricted attendance, with other companies deferring AGMs until later in the year. 56% of companies covered by the report strongly encouraged their shareholders not to attend the AGM, while 36% held a closed AGM. 8% held their AGM before the COVID restrictions were in place.

“The COVID Act, which commenced on 21 August 2020, made temporary amendments to the Companies Act 2014. Prior to this Act, virtual meetings were not permissible under Irish Law and companies had no intrinsic power to ensure that shareholders did not attend the physical AGM. This did cause some issues, as seen with the High Court refusal to grant an order restraining the holding of a closed AGM by Grafton Group on the foot of an injunction brought by the company’s largest shareholder. Once introduced, the Act allowed an Irish company to hold a true virtual general meeting with no physical venue for the first time, and has now been extended to 9 June 2021 following Government approval on 17 December”, said Justin McKenna, Partner, Mason Hayes & Curran LLP.

In terms of board diversity, the report shows that there is some progress being made amongst the 25 main-market listed companies included in the analysis. 29% of board seats on Irish listed PLCs are held by female directors, up from 25% in 2019 and 19% in 2018. AIB have made the most progress in this area, and now have a board comprising of a majority of female members. “The recent report from Balance for Better Business acknowledged some progress in this area, albeit slow progress. Amongst the 25 companies in this report, the increase from 19% in 2018 to 25% in 2020 is good news, but there is still work to be done to change the nature of board culture. The example of AIB with a majority female board is one to be applauded”, added Anne.

The report also shows that only 36% of companies declared a dividend this year, compared to 54% last year, with 3 companies withdrawing a proposed dividend resolution in light of COVID-19.