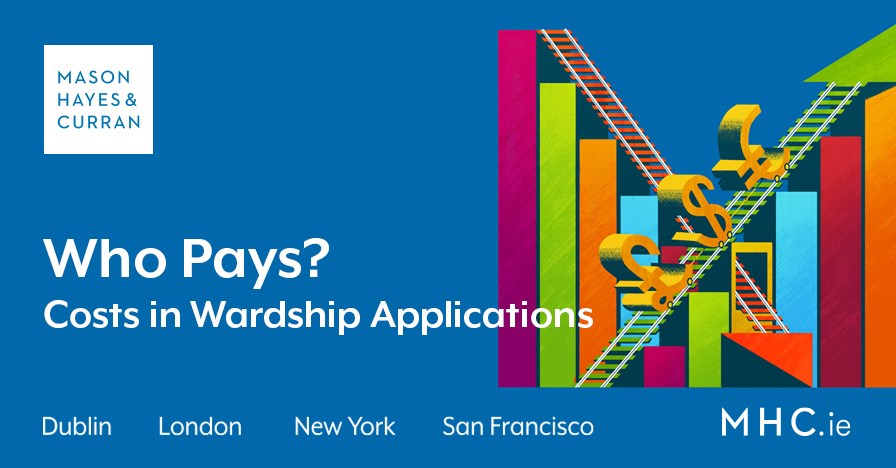 Ward of court applications are presented to the High Court in a wide variety of circumstances. In certain cases, it is particularly desirable that the proposed ward be legally represented, for example where a detention order is sought as part of the application, typically in a nursing home or healthcare setting. In a recent case[1] both the right of the ward to be represented and the question of who should meet the cost of the representation were addressed by the High Court.

The case concerns an elderly gentleman with a diagnosis of dementia. The HSE expressed concern for his ability to live independently. Mr Justice Peter Kelly directed an inquiry into his capacity. A patient advocacy group referred his case to a private solicitor, who filed an objection to the wardship inquiry on his behalf. The solicitor instructed junior and senior counsel, and obtained two consultant medical reports. Both reports affirmed his lack of capacity, and he was ultimately admitted to wardship. His lawyers then sought their costs against the HSE, which was decided by Ms Justice Niamh Hyland.

His lawyers argued that he had a right to be represented in the wardship proceedings. They maintained that the HSE had a general duty to fund the legal representation for proposed wards. The HSE opposed the application, pointing out that his lawyers had not sought in advance to agree the discharge of their costs by the HSE. They also held that no order for his detention had been made, and the fact that the HSE discharges the cost of representation in certain cases does not entitle him for an order for his costs.

Noting the Supreme Court decision in AC v Hickey & Cork University Hospital & Ors [2019] IESC 73, Ms Justice Hyland accepted that it was appropriate for him to have been represented. However, she found that an order for costs against the HSE did not necessarily follow. She considered:

The Court highlighted the lack of advance consultation in respect of costs by his legal team with the HSE, and also noted that in this particular case, the ward’s estate had sufficient means to discharge the costs of the ward. The Court held that the ward’s right to legal representation was not diminished by an order directing that the ward himself pay the cost of his representation.

It is clear from the judgment, and the arguments advanced, that the nature of the High Court’s wardship jurisdiction presents additional considerations in a costs application. The Court’s analysis of the factors that may be taken into account when adjudicating on an application for the costs of a respondent in wardship proceedings is to be welcomed.

If you have any queries regarding costs in wardship cases, please contact a member of our Health & Prosecutions team.