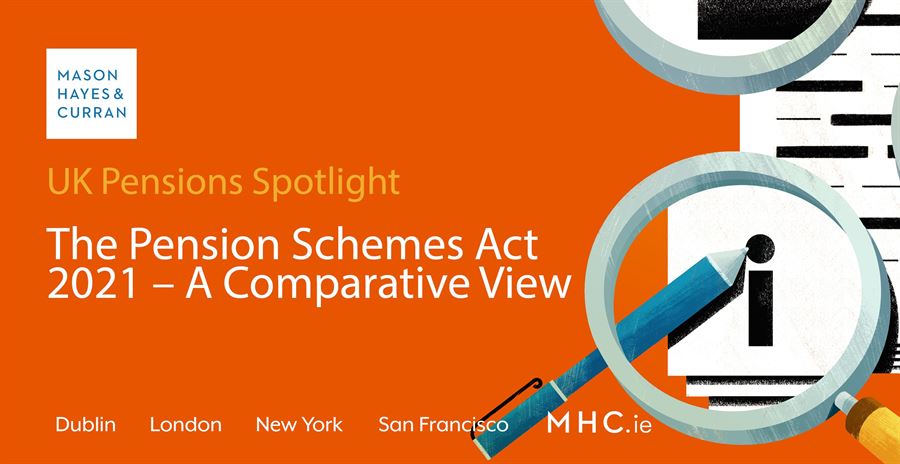 At the time of writing, the UK Pension Schemes Act 2021 has just passed through parliament and been granted Royal Assent. The introduction of criminal sanctions, a new notifiable events regime and increased powers of the Pensions Regulator (TPR) are of particular interest. Though there is no Irish equivalent for many of the Act’s provisions, changes to the regulation of defined benefit schemes in Ireland that focus on the protection of member benefits are not difficult to imagine. When one considers the potential cost for the taxpayer of defined benefit scheme wind-ups, an argument in favour of a safety net can easily be made. Here we spotlight some of these aspects of the Act and compare the relative Irish position.

The first relates to what are referred as section 75 debts. S75 of the UK Pensions Act 1995 (1995 Act) aims to prevent employers from walking away from a pension scheme without paying their fair share of scheme liabilities. The s75 debt is triggered when an employer withdraws from a DB scheme and is calculated on a buy-out basis. This buy-out calculation tests whether there are sufficient assets in a scheme at the time that the employer leaves to secure all member benefits by purchasing annuity contracts from an insurance company. The new Act states that a criminal offence will be committed by a person who acts or engages in a course of conduct aimed at preventing recovery of the s75 debt from the outgoing employer without reasonable excuse.

The second offence relates to an act or a course of conduct that detrimentally affects, in a material way, the likelihood of accrued scheme benefits being received without reasonable excuse.

The lack of anything similar to s75 debts in Irish law creates an uncertainty around corporate transactions and insolvency events for DB schemes. In the UK there is also the Pension Protection Fund (PPF) which pays compensation to members of eligible DB schemes where an employer has a qualifying insolvency event. In Ireland, the risks associated with the lack of any such safety net can be seen in the Waterford Crystal case which will ultimately cost the taxpayer €180 million.

It remains to be seen whether such a structure is necessary for Irish schemes. The Pensions Authority’s latest DB scheme statistics show that as of 2019, there were still over 570 DB schemes subject to the funding standard with total assets of €65.3 billion. As events such as the recession and the recent health crisis have shown, no sponsoring employer is immune from rapid economic downturns and solvency issues.

The Act extends TPR’s information-gathering powers by extending its power to compel individuals to attend interviews and its power to inspect premises. For non-compliance with these powers TPR may impose civil penalties on a fixed and escalating basis. The aim of these provisions in the Act is to allow for a faster resolution when dealing with issues that are time critical.

The Pensions Authority may investigate and prosecute alleged breaches of the 1990 Act and investigate whistle-blower reports. It also has the power to issue statutory requests for information and may carry out on-site investigations provided by s18 of the 1990 Act. During 2020, the Pensions Authority also completed a large scale engagement programme with DB scheme trustee boards. The aim of the engagement was to examine the trustee board’s governance practices, particularly in relation to the management of scheme risks. Towards the end of the year the Pensions Authority also contacted trustees of both DB and defined contribution (DC) schemes and asked that they complete a tick box survey in anticipation of the transposition of the IORP II Directive into Irish law. The survey put a number of focussed questions to trustees ranging from their knowledge of the Directive and appointment of key function holders, to their contractual arrangements with service providers.

Various circumstances can arise for DB schemes in Ireland where a notification process must be adhered to. For example, the 1990 Act requires a notification to be made to the Pensions Authority by trustees where there is a failure by a person to comply with a term of a funding proposal. Members of all occupational pension schemes must also be notified of any material change to the terms of their scheme. However, there is nothing in Irish law that could be seen as analogous to the new notifiable events regime provided for in the Act which has a definite focus on corporate transactions. The Pensions Authority’s DB Engagement Programme found that a main area of concern for trustee boards was the employer covenant. While some boards confirmed that they had an active engagement policy with their sponsor, some did not. If a notifiable events framework were implemented in Ireland it may force sponsors to engage with their scheme trustees before entering into transactions that could put member benefits at risk in the future. However, the purpose of the UK framework is to flag that there may be an increased risk of a call on the PPF. If there is no equivalent structure to the PPF in Ireland, then a notifiable events framework on its own may not be sufficient to protect member benefits.

The Act also introduces a new civil penalty of up to £1 million for knowingly providing false or misleading information to TPR or to trustees in certain circumstances. For instance, this might occur when providing a scheme return or completing the process for reporting a notifiable event.

The Pensions Authority may impose fines and pursue criminal convictions for breaches of the 1990 Act and the provision of false or misleading statements is also a criminal offence under Irish law. However, in terms of scale, there is no equivalent in Irish legislation to allow for the imposition of a civil penalty of up to £1 million for providing false or misleading information.

Many provisions of the Act are aimed specifically at DB schemes. The BHS pension schemes debacle and the costly transfer of the Carillion pension scheme to the Pension Protection Fund were surely motivating factors for the inclusion of many of the more punitive provisions of the Act. While the introduction of a structure akin to s75 debts would certainly be a positive for the protection of member benefits, the complexity and cost of DB schemes means that they are no longer favoured by employers. In the early 1990s there were approximately 2,500 DB schemes in Ireland but there are fewer than 600 in 2021. The increased information gathering powers of TPR are certainly noteworthy as well. However, under the IORP II Directive, the Pensions Authority has significantly enhanced powers of intervention and supervision.