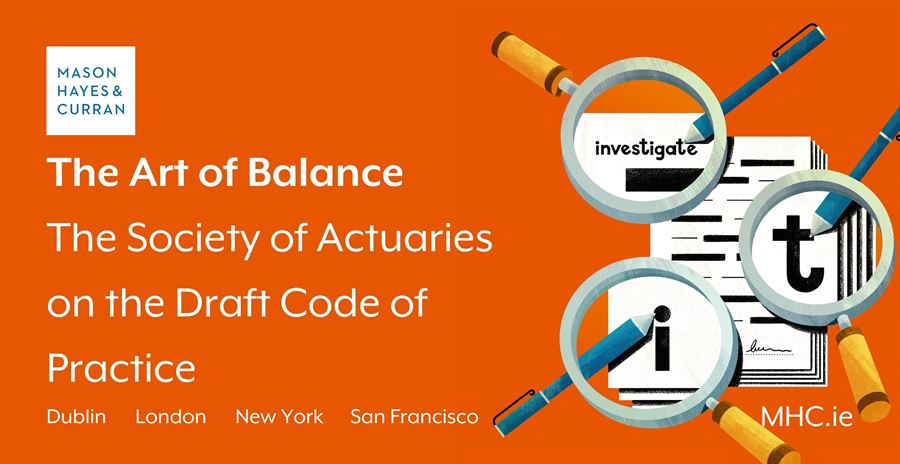 The Society of Actuaries (Society) submission (Submission) to the Pensions Authority on the Draft Code of Practice (Draft Code) will raise some eyebrows. The Society’s initial comments in the Submission provide a very clear take on its overall reading of the Draft Code. It argues that the “primary objective” of the IORP II Directive (Directive) and the Draft Code should be to ensure better outcomes for scheme members. It then expresses its concern that the requirements of the Draft Code will place an unmanageable burden on smaller schemes stating that:

“If the requirements as drafted are applied to smaller/less complex schemes, many will cease to be viable and will wind-up”.

This concern around a lack of proportionality in the Draft Code has been echoed by other stakeholders. This is because it could be seen as ignoring those provisions in the Directive and the transposing Regulations which allow for proportionality relative to the “size, scale and complexity of the activities of the IORP”.

The requirements of the Draft Code are presented as a baseline for all scheme types. It provides that “trustees may consider it appropriate to implement additional measures above and beyond what is specified in the Code”. For smaller schemes this means that there is little room for manoeuvre.

The Society is of the view that there is a place for schemes of all sizes. It argues that the Draft Code’s minimum standards are overly onerous and will result in the wind-up of many schemes that cannot meet them. It recommends that a cost/benefit analysis be undertaken for small schemes to ascertain if a wind-up will be in the best interests of members. It also notes that deferred members of smaller schemes could end up in single member arrangements, like Buy Out Bonds and PRSAs, where they are likely to incur higher costs than they would if they were able to remain in their scheme.

Finally, the Society notes that the maintenance of 12 policies on an annual basis seems excessive for smaller schemes.

On the governance provisions in the Draft Code, the Society is critical of the four week notification requirement for the appointment of a Key Function Holder (KFH) to a scheme. The KFHs are the holders of the internal audit, risk management and, if necessary, actuarial functions. Instead, the Society suggests that a pre-approved list, like lists maintained for the Scheme Actuary or Registered Administrator regimes, would be more appropriate.

It also suggests that the default position for member communications should be electronic, in the absence of an objection by a member. While this makes sense, the Authority cannot amend the language of the transposing Regulations which require explicit member consent in certain circumstances.

The Draft Code contains a specific process for trustees to follow in appointing investment managers. The Society argues that such a process could end up becoming overly standardised, with providers and trustees focussing on the requirements of the process rather than member outcomes. It is suggested that the Authority might instead consider a more flexible procedure for the appointment of investment managers.

The Draft Code also states that trustees must seek the most suitable investment manager for each investment mandate. The Society points out that where a scheme has already appointed an investment manager for a passive investment strategy, it would be excessive to send the trustees back to the market to assess other managers. It refers again here to the proportionality requirement in the Directive as well as the need to avoid unnecessary costs that do not benefit members.

The Draft Code also provides details on how trustees should seek input and support from the sponsoring employer. The Society notes that as there is no formal framework in place, like the covenant ratings system in the UK, it will be very difficult for trustees to factor employer discussions into any funding decisions for a scheme. It also notes that employers may be unwilling to engage given the commercial sensitivity of the information involved. For the purposes of clarification, the Society asks the Authority to provide a set of principles that deal with sponsoring employer support.

The Society notes that the trustee qualification requirements in the Draft Code will require time to implement, as many trustees may need to complete courses to ensure they are suitably qualified. The Society also asks the Authority to give confirmation on whether individuals with substantial trustee experience will be “grandfathered” in a manner like other qualifications.

The Draft Code contains a list of events and conditions that automatically disqualify an individual trustee or director of a corporate trustee. The list includes instances where someone is being “investigated, disciplined or suspended by a regulatory or professional body, a court or tribunal”. The Society notes that this requirement might not be seen as just or fair, where someone that is in the process of being investigated is in fact cleared of any wrongdoing when the investigation has completed.

The Submission has given the Authority much to consider and there is undoubtedly a lot of merit in the suggestions made by the Society. The final Code of Practice will be with us for some time to come and will form the basis of much trustee decision-making. With this in mind, it is crucial that the Code of Practice strikes a balance between proportionality and prescribed rules.

For more information contact a member of our Pensions team.