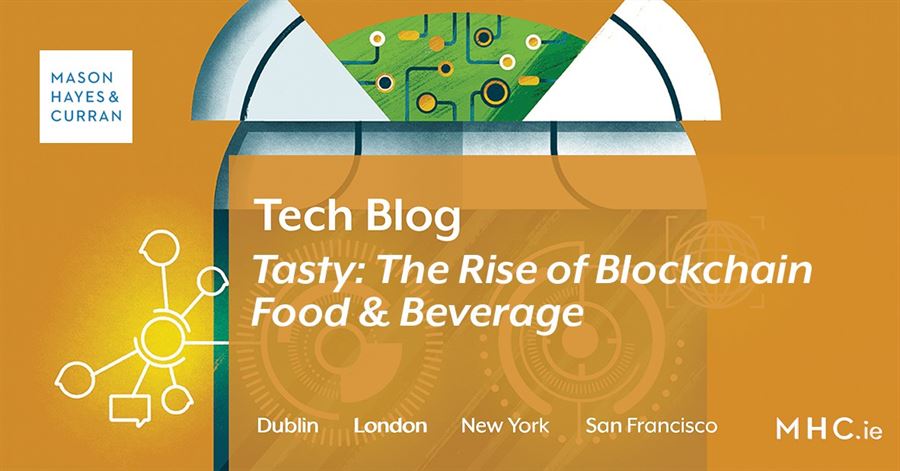 As a basic level, blockchain technology creates a shared digital ledger of transactions that a number of participants manage, with no central entity controlling. Blockchain has many advantages beyond use in cryptocurrencies.

Its ability to track an asset in an efficient and reliable way makes it ideal for recording business processes or movements in a supply chain. The decentralised nature of blockchain, removing any intermediary, can also lower the costs of transactions and make them vastly faster to execute. Blockchain is potentially safer and secure than traditional databases. It encodes a transaction using cryptography, which permanently inscribes it on the ledger. This makes it difficult to tamper with. It promotes integrity and transparency as past transactions are unchangeable and all participants who have access to the blockchain (which can be set to public or private) can view and verify it.

Advantages of blockchain in food and beverage industry

The following are three examples of businesses that are currently use blockchain technology in the food and beverage industry:

One of the attractive features of blockchain for the food and beverage sector is that as it is reliable and hard to tamper with, it can help to build trust with a customer in relation to a product. Downstream Beer is a craft beer produced by Ireland Craft Beers. ICB has implemented blockchain in an effort to better connect with its customers by emphasising the authenticity and transparency of its product. ICB’s customers can install an app that allows them to follow the journey of the beer’s four ingredients, tracked using blockchain, as the ingredients make their way from the farm to the customer’s beer. Blockchain keeps high quality data secure through cryptographic techniques that make it harder to falsify, which in turns means the customer can rely on what it sees. As consumers across the globe take a more involved approach to how the products they consume are made and demand visibility of the ingredients, blockchain offers companies the opportunity to harness this interest in reliability, and to make it a feature, and indeed a selling point, of the product.

Another application of blockchain that is of particular appeal to the food and beverage industry is the possibility to trace the movement of ingredients throughout the supply chain in a more safe and secure way. This can help enhance the safety of food placed on supermarket shelves and reduce costs for supermarkets. It is one of the driving forces behind Walmart’s push to rollout a blockchain across its entire business. As a blockchain ledger can track assets as they move through the supply chain, the parties can find and act on any contaminated product more efficiently and accurately, and before contaminated food reaches consumers. Blockchain can also lower costs for Walmart due to its decentralised nature (i.e. no middleman). Walmart reportedly claims that its implementation of hyperledger blockchain has reduced the length of time that it takes to trace food in the supply chain, from approximately 7 days before to 2.2 seconds today. There is also invariably a cost-benefit to such a dramatic reduction in time being spent manually tracking the movements of food and beverage items. It also has the potential to reduce food waste by allowing supermarkets to pinpoint problematic batches, which may in turn help reduce the wholesale discarding of unused groceries.

Various parties in the supply chain, such as farmers and consumers, have an interest in ensuring that supply chains are open and transparent. Increasingly they are demanding that this information is available in a digital format. Blockchain has the potential to bring trust and transparency as the ledger is fully verifiable and unchangeable. The WWF, Consensys, TraSeable and Sea Quest Fiji have collaborated to rollout a project in Fiji, which utilises blockchain technology to verify the conditions in which fish like tuna are caught, the working conditions of local fishermen, and whether the fish are caught in waters that are over-fished. This enhanced visibility for participants in the supply-chain allows stakeholders, which may be some steps removed from the initiation of the process, to trust the data they see and make more informed choices. Previously, this may have been difficult to do where the supply chain is long and complex. Blockchain also increases the visibility of the businesses and workers who feature at the early stages of the supply chain, making it easier for others to verify that they have been treated fairly.

Another issue is how businesses plan and implement the overall system in practice. As with any system, the effectiveness of a blockchain solution depends on the consistency of its implementation. This will require stakeholders at every level of the supply chain to agree what information they will input into the ledger, and to stick to it. This will enable each stakeholder to trust on the information and be aware of any limits. If, for example, a supermarket enters information that it receives from a manufacturer into the blockchain ledger, but the producer did not do this before the produce was transported to the manufacturer, there would be a gap in the data.

What is on the horizon?

As more businesses adopt blockchain we expect to see more settled standards and practices evolve. This will also lower the cost of entry. In addition, governments and regulators support blockchain technology and create facilitative legal frameworks, which will assist the spread of the technology. Together, these factors will help the food and beverage industry at all levels of the supply chain to achieve the exciting and potentially lucrative benefits of blockchain, such as building consumer trust, improving food safety, and increasing supply chain efficiencies.