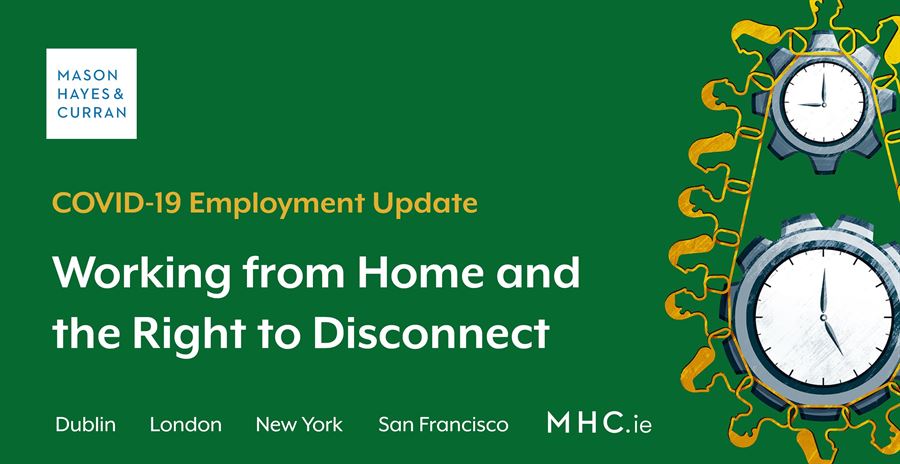 AIB, with the assistance of the FSU, have recently implemented a “Right to Disconnect Policy”, the first of its kind in Ireland. The policy outlines a number of measures, including:

The Policy reflects announcements made by Minister Heather Humphries, that she would be introducing a legal “Right to Disconnect”, reflecting similar legislative changes introduced in France. The French “El Khomri law” provides employees with the right to disconnect from work calls and emails outside of working hours. In the wake of this law being introduced, a number of other countries have implemented similar measures, with the current Irish administration clearly keen to follow suit.

So, is a “Right to Disconnect Policy” something that employers need to consider? What is the legislative position in relation to such a policy?

The Organisation of Working Time Act 1997

The Organisation of Working Time Act 1997 (“the Act”) implemented the European Working Time Directive into Irish law, providing employees with various protections to ensure they were not working excessive hours and that they were receiving sufficient breaks - including daily, weekly and annual breaks.

Under the Act, employees must be given a 15 minute rest break every 4.5 hours and a 30 minute break every 6 hours, which includes the 15 minutes referred to previously. In addition to this, employees are entitled to 11 hours consecutive rest every 24 hours, and 24 hours consecutive rest every seven days. There is also a mandatory 48 hour average weekly working limit which applies to all employees and, with very limited exceptions, cannot be contracted out of.

Technically, the Right to Disconnect is already enshrined in legislation under the Act. The issue though, is that the Act was created in 1997, a time when the workplace and working practices were vastly different to how they are now. With the introduction of technology, these rights have gradually been impinged upon as work has become more accessible in terms of how, when and where your employees can work. While in 1997 it was easy to record employees working time, as it was mostly performed on site at the office, nowadays it is nearly impossible to do so with work being conducted at various times, in various locations and on various devices.

The recent decision in Kepak v O’Hara exposed the practice of excessive working hours as well as the weaknesses in relation to current reporting practices. The case concerned an employee who was found to have worked excessive hours, in breach of the Act, and was awarded compensation by the Workplace Relations Commission (WRC).

Ms O’Hara was employed by Kepak (the Company) as a business development executive and contracted to work 40 hours per week for the Company. Ms O’Hara outlined that she would regularly receive and respond to emails from before 8 o’clock in the morning until after 12 o’clock at night. She claimed that, as a result, she regularly worked in excess of the average of 48 hours per week permitted under the Act.

In responding, the Company claimed that Ms O’Hara was contracted to work 40 hours per week and there was no obligation upon her, either contractual or otherwise, to work in excess of 48 hours per week. The Company further claimed that Ms O’Hara was working these long hours due to her own inefficiency. In finding in Ms. O’Hara’s favour, the Labour Court awarded her €7,500 in compensation for her employer’s breach of the legislation.

There were two notable outcomes from an employer perspective in terms of the Court’s considerations. The first related to the employer’s obligation to record their employees time under the Act. In practice, very few companies retain records in the prescribed format or at all. The Court found that where records aren’t kept in the prescribed format, the onus is on the employer to prove that they are compliant.

The second consideration related to the Company’s defence that they didn’t require Ms O’Hara to work the hours that she worked. The Court found that the onus is on the employer to ensure that their employees are not working excessive hours. Where not recording their hours, this may require monitoring employees working practices instead. Where they choose the latter course of action, they will need to be proactive in addressing any excessive hours being worked, or performance manage the employee so that they work more efficiently.

This was a significant case and one that set alarm bells off with many employers, where it had become acceptable for employees to work excessive hours during evenings and weekends, with no records on file and no action taken to address these practices.

More recently, Fórsa have conducted Ireland’s largest ever employee opinion survey on remote working, with 86% of respondents indicating that they would like to work remotely in some format. As part of the survey, respondents were asked about their concerns when it came to working from home. The second biggest concern for employees, with 42% of respondents expressing that it would be harder to disconnect from work calls or email. This finding was further supported by a previous survey which provided a similar result, where 47% of respondents in that survey stated that “switching off” and “avoiding overwork” were the most common challenges in relation to remote working.

It is evident that disconnecting from work is an issue for employees in the modern work environment, where technology has enabled an “always on” culture. While there is no legal “Right to Disconnect” at present, the Working from Home (Covid-19) Bill will seek to address out of hours communications and is currently being debated in the Dail. However, employers are still obliged to ensure that they are in compliance with the Organisation of Working Time Act, with the Kepak decision further emphasising this.

Another method of ensuring compliance could be to implement a “Right to Disconnect Policy”, preventing your employees from working excessive hours. This could be particularly important in the current circumstances where remote working has become the norm and employers have less oversight of their employees working practices.

For more information on any of the above, please contact our Employment and Benefits Team.