Reform of Regulation of Social Care Sector Recommended by HIQA 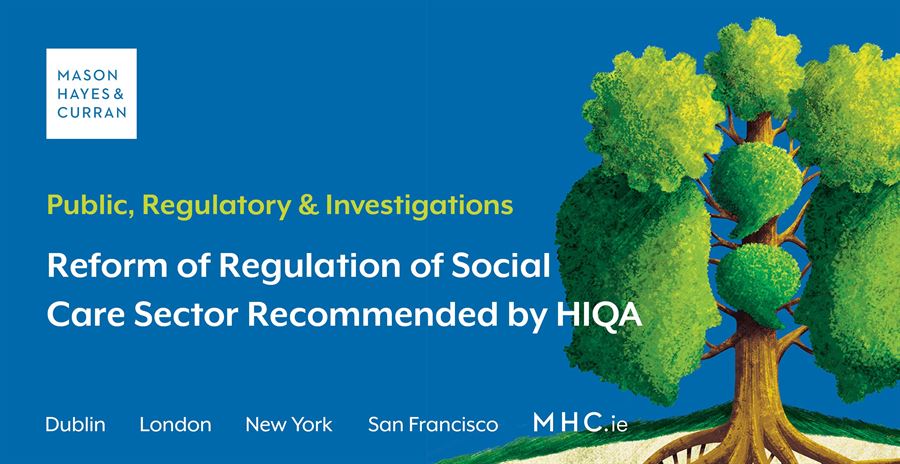 The Health Information and Quality Authority (HIQA) has published a report calling for the reform of the Health Act 2007 to take into account the changing nature of health and social care services. Many services are comparatively underdeveloped in Ireland and exist in a grey area in terms of regulation or independent quality assurance. We set out a summary of HIQA’s key recommendations.

Changes to social care present a challenge to the definitions of ‘designated centres’ in the Health Act 2007. The concept of a designated centre as contained in the Health Act 2007 relates to residential services and nursing homes and does not cover care provided via assisted-living or home-support services. These services are not currently regulated and many vulnerable people rely on them for support.

Ireland’s ageing population and focus on traditional forms of social care funnels individuals into nursing homes, when alternate forms of care may be more suitable. HIQA and the recent Nursing Homes Expert Panel recommend nursing homes should be seen as a component of a more expansive social care system that considers the full range of care services that may be delivered rather than focusing on a type of physical location or institution.

The current regulatory regime[1] focuses on the ‘where’ of social care rather than the ‘what’. There are no definitions or descriptions in the regulations for the various forms of care in Ireland today. HIQA has criticized this one-size-fits-all approach because it prescribes the same standards to people with a wide variety of care needs and capabilities.

HIQA recommends that the model be reformed to focus on the service rather than the establishment. This has been the direction in the UK for some time. Each care setting should be distinctly defined with a tailored set of regulations.

The regulations establish a list of incidents that must be reported to the Chief Inspector of HIQA, either within three working days, or every three months depending on the severity. HIQA notes that many countries prescribe 24 hours to notify severe incidents and also require a broader range of incidents be reported. HIQA recommends the current notification regime be assessed to consider the timescales, and the merits for current notifiable incidents, and potential new incidents.

HIQA considers the powers of the Chief Inspector to be “somewhat blunt”. Currently, the Chief Inspector is empowered to attach a restrictive condition to a provider’s registration or seek de-registration of a designated centre from the courts in cases of serious non-compliance. There have been enforcement proceedings brought against three nursing homes in recent years, two of which were challenged with judicial review proceedings.

HIQA proposes a provision should be added to the Health Act 2007 to issue designated centres with a compliance or improvement notice to:

The proposed amendment would enable regulatory compliance in a more efficient, appropriate and proportionate way. It is noteworthy that HIQA lists enforcement changes as an area that “requires immediate consideration and reform.”

The recent report from HIQA has recommended a number of reforms of the Health Act 2007. If these changes are implemented, service providers not currently regulated by the Health Act 2007 and accompanying Designated Centre Regulations may soon be subject to regulation. In addition, the enforcement powers of the Chief Inspector have been highlighted by HIQA for attention. Changes in this area would allow for a more measured approach to regulatory compliance.

For more information and expert guidance in all related matters, contact a member of our Public, Regulatory and Investigations team.

Emergency Placement of Children in State Care; Key Considerations for Professionals and Organisations