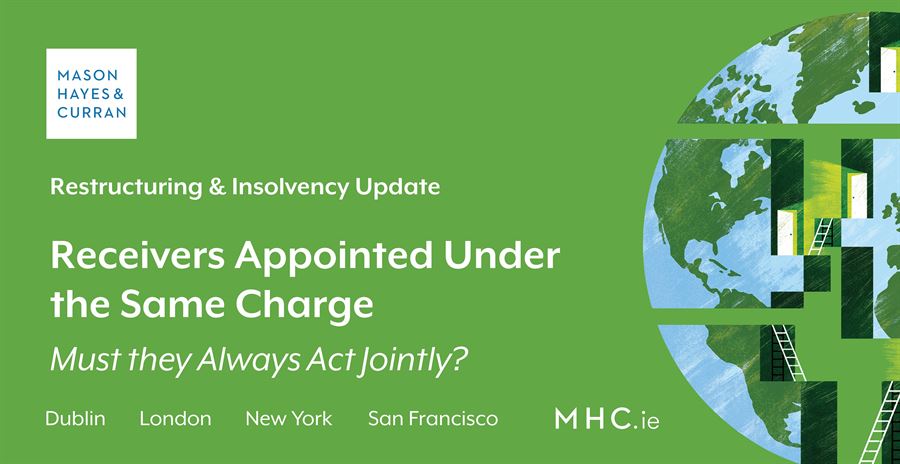 Debentures and other charge documents often provide that more than one person may be appointed as a receiver. There are practical advantages to this, including the administrative efficiencies brought about by having more than one receiver capable of exercising the powers that he or she has been granted. The advantage would be lost if receivers had to act jointly and collectively with respect to all decisions.

The extent of the powers and the circumstances in which receivers can be restricted to acting jointly, and not severally, was one of the central issues considered by the Court of Appeal in the recent judgment in Sheedy v Jackson [2020]

The proceedings concerned a claim of specific performance in relation to a contract for sale entered into by a receiver and the plaintiff/appellant in 2015 over a 230 acre estate known as Whitfield Court, Kilmeadan, Co Waterford. A second receiver was appointed in 2017 under the same mortgage deed as the first receiver, but over only part of the property in question. The first receiver was not discharged.

The validity of the appointment of the second receiver was not challenged. Rather, the argument advanced by the plaintiff/appellant was that since two receivers were appointed they must act together to take any steps in the receivership. In essence, the suggestion was that the rescission notice could not validly have been served by the first receiver only. Both should have served it.

The first receiver argued that the answer to this submission lay in the contract for sale itself, which defined for the purposes of a rescission notice the “vendor” as the first receiver. Further, it was submitted that the mortgagee was entitled to appoint receivers severally and that in the absence of any authority or principle of law imposing such a restriction, severally appointed receivers are entitled to act severally.

Despite upholding the decision of the High Court to refuse permission to amend the Statement of Claim (which application was belatedly brought on the fifth day of the trial) to include this ground, and finding that the issue was not properly before either the High Court or the Court of Appeal, Judge Murray considered this argument in some detail.

The judgment includes a useful overview of the law in relation to what the judge termed the “powers of a plurality of receivers”.

The Court held that generally an analysis of the interplay between the powers of separately appointed receivers will start with examining:

The Court found that the mortgage deed in question incorporated a power to appoint more than one receiver. Having so found, it then went on to consider the question of whether the powers enjoyed by these receivers were joint or several. Of particular relevance to the Court in this analysis was the wording of the mortgage deed in question, which included the phrases “any receiver” and “such receiver”. The Court held that this pointed to a “strong implication… that one of a plurality of duly appointed receivers” could exercise the powers provided under the mortgage deed.

The Court considered that there are few conceivable instances where it would make sense to impute an intention that receivers, appointed over the same asset, are appointed with joint powers only. One such exceptional example would be where there is potential for a deadlock between the receivers. The Court noted that such an impasse can be dealt with by a directions application to the High Court.

The existence of two or more receivers acting concurrently can give rise to complex issues with regard to the powers of and relationship between them. In this case two receivers were appointed on foot of the same debenture but at different times.

The judgment of the Court of Appeal would indicate that, in the absence of express agreement to the contrary, it will be in the exception rather than the rule that a Court will find that separately appointed receivers are required to act jointly, and not severally, on all matters. To require them to do so would lead to “unnecessary logistical complications in the discharge of their functions”.