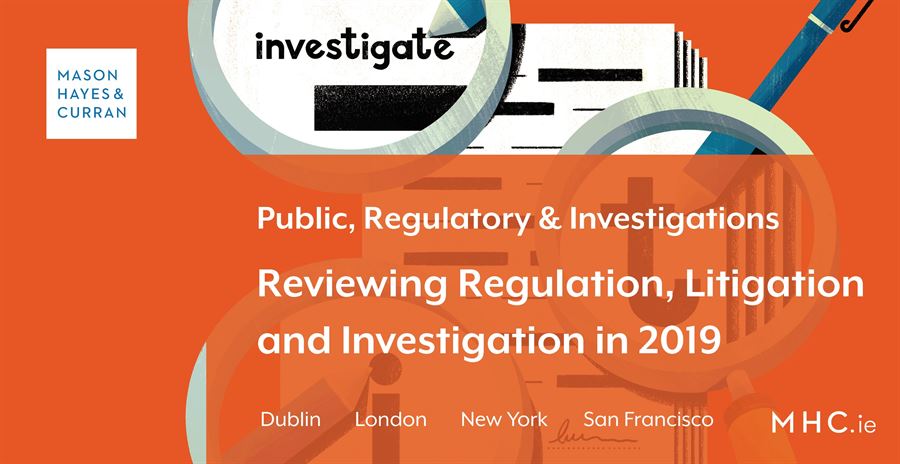 We consider developments in regulation of Health and Social Care Professionals; the treatment of excessive discovery requests by the Court of Appeal; and issues to be considered by persons called as witnesses before investigations and inquiries.

In February 2019, the Government introduced the Regulated Professions (Health and Social Care) (Amendment) Bill 2019 into Dáil Éireann. This legislation seeks to increase the consistency of regulation of a large number of professionals in this area, including doctors, nurses, midwives, dentists, social workers and speech and language therapists. When enacted, it will have a significant impact on the fitness to practise procedures across the professions.

Going forward, registrants will have increased disclosure obligations, both at registration and annual renewal, relating to convictions or restrictions which have been placed on the practise of their profession, in Ireland or elsewhere. A likely welcome change for registrants is that all sanctions must be approved by, and can be appealed to, the High Court. The current regime only provides that those sanctions considered serious are subject to these protections.

The Bill was passed by Dáil Éireann on 6 November 2019 and is now at Report Stage in Seanad Éireann. It can be expected that 2020 will bring a sea change for regulated professionals in these areas. We discuss here the impacts of the Bill in greater detail.

In Gavin Tobin v The Minister for Defence, the Court of Appeal endeavoured to ease the difficulties and burdens associated with answering discovery requests. The Minister had appealed a High Court order for extensive discovery, which was accepted would take 10 members of staff 220 hours to collate. The Court of Appeal limited the scope of certain of the requested categories, but, most significantly directed that Mr Tobin use other means to seek much of the information he required, and only if these proved unsuccessful could he renew his discovery applications. It noted that, if the burden imposed by allowing discovery of certain categories of documents would be considerable, an order for discovery should not be made unless all other available options had been properly explored.

However, in July, 2019, the Supreme Court largely restored the extensive discovery order made by the High Court. The Supreme Court agreed that, in addition to relevance and necessity, the Court should consider issues of proportionality and alternative means of proof. However, it emphasised that if the documents sought are shown to be prima facie relevant and necessary to dispose fairly of the case at a proportionate cost, then a burden falls on the requested party to demonstrate that they are not in fact necessary (having regard to factors including the way it has pleaded its case), and also to suggest any alternative, more proportionate, and less burdensome/costly means of achieving the same end. These factors will be weighed by the Court, but are not automatically determinative of a party’s entitlement to an order for discovery.

The issues raised in this case are indicative of the “crisis” facing the courts and litigants by the whole process of discovery.

For a detailed analysis of this judgment and its impact as well as anticipated reforms, click here

On 5 November 2019, our Investigations & Inquiries seminar focused on witness participation in these forums, and how best to prepare, whether conducting such an investigation, or appearing before one. A particular focus was placed on the judgments in the Angela Kerins and Denis O’Brien cases, and the effects which these judgments have had on appearances before parliamentary committees.

Parliamentary committees are, however, not the only form of investigation or inquiry before which individuals may be called. The ever-increasing use of investigations and inquiries in both regulatory and other spaces necessitates careful consideration.

Witness rights and obligations are context-specific, and the importance of seeking of legal advice as required was emphasised by our speakers at the seminar. Those called to appear before an inquiry or investigation, statutory or otherwise, have significant obligations. However, prospective witnesses should be conscious that they retain many rights surrounding their appearance before these bodies, and the powers and remit of the individual investigation should be ascertained prior to participation.

Further insights from this event can be viewed here

An increased focus on accountability in all sectors is evident from developments during 2019. Those affected should be cognisant of their obligations of cooperation and disclosure. However, the obligations imposed by professional regulation and other forms of investigative process are subject also to rights and privileges on which legal advice should be sought at appropriate junctures for the protection of individuals and organisations alike.

The developments in discovery practice and procedure discussed above also highlight that, while reform of the ‘discovery crisis’ may be on the way, parties to litigation should seek in the meantime to optimise their positions by paying close attention to the guidance and principles given by the Supreme Court in the Tobin case. This will include considering how to plead cases more effectively for the moving and responding parties, careful circumscription of the universes of documents sought, availing of alternative various means of obtaining documents and evidence (including use of interrogatories and notices to admit facts), and possible cooperation between parties with a view to minimising cost and court applications.

As we look forward to 2020, we anticipate the enactment of the Regulated Professions (Health and Social Care) (Amendment) Bill, and the impact this will have for both regulators and those they regulate. Careful consideration should be given to the increased obligation of disclosure placed on registrants and the powers of regulators to deal with complaints for the benefit of the public.

We anticipate that 2020 will also see the full implementation of the Data Sharing and Governance Act 2019. We will be hosting a seminar on the changes in practice which this necessitates in February 2020.

In addition, we will monitor with interest anticipated sectoral regulation developments in 2020. These will include, in particular, the progression of on-going Central Bank administrative sanctions investigations (particularly those relating to tracker mortgage issues). Developments should also include progression of the Central Bank (Amendment) Bill and its banking culture and individual-accountability centrepiece, the proposed Senior Executive Accountability Regime (or “SEAR”).

Further, we expect developments in 2020 to include moves towards use by the Commission for Regulation of Utilities (CRU) of its expanded regulatory toolkit, in a renewed focus on organisational compliance and enforcement activities. In particular, 2020 may see the roll-out and use of the CRU’s new powers of investigation and the imposition of administrative sanctions, including major sanctions or financial penalties for “improper conduct” comprising of failure by licensees to comply with standards of performance specified by the CRU.