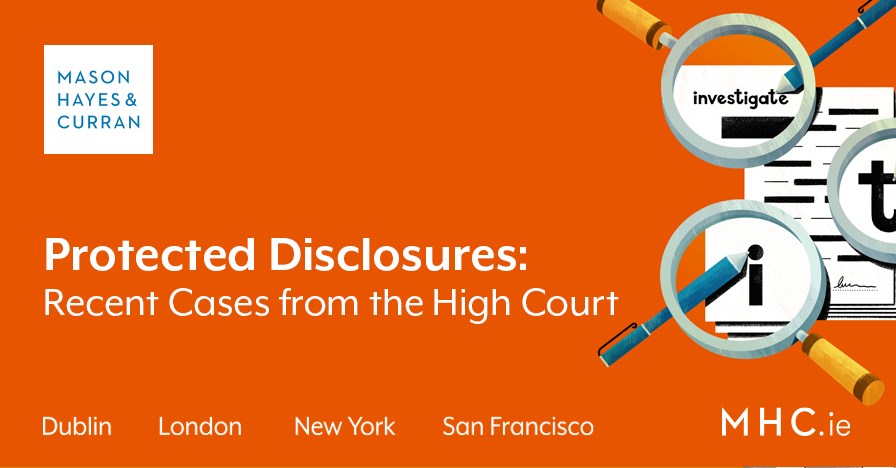 The complexity of the Protected Disclosures Act 2014 (the Act) has resulted in a number of new cases in the High Court. The benefit of these cases is that we are gaining a greater understanding of the application of the Act in practice.

This case highlights that the fact of having made a protected disclosure does not “immunise” the employee from being disciplined for behaviors that would otherwise warrant disciplining.

Mr Hosford was hired as a finance manager in the Department of Employment Affairs and Social Protection in 2014. He was subsequently subject to a disciplinary process in 2017 for alleged misconduct in which the allegations were upheld. He was given a final written warning for his behaviour, warning him to behave appropriately in future and respect his colleagues. He appealed the matter internally but the appeal manager upheld the outcome, finding the sanction “proportionate”.

Mr Hosford took a claim to the Workplace Relations Commission (WRC) on the basis that the conduct of the disciplinary process amounted to penalisation for making his protected disclosures. The WRC found against Mr Hosford and he appealed the decision to the Labour Court, who affirmed the decision of the WRC.

In reaching its decision, the Labour Court outlined that:

In assessing the Labour Court’s decision, Justice Meenan considered the disciplinary process and found that, while the subject matter related to the circulation of emails containing the purported disclosures, the disciplinary process was not concerned with “the content of the emails but (rather) the applicant’s practice of widespread mailing of internal colleagues and external parties”.

In dismissing the appeal, Justice Meenan found that the Labour Court afforded the appellant his right to fair procedures throughout and had a legally sound basis for reaching its determination.

This second case highlighted that a grievance can also be a protected disclosure and that the two are not mutually exclusive.

Mr Baranya re-commenced employment with Rosderra Irish Meats Group Limited (the “Company”) in summer 2015, having worked there previously. In September 2015 he was dismissed and took a case for unfair dismissal, which was ultimately appealed to the Labour Court.

Mr Baranya claimed that the work he was hired to do was causing him considerable pain and he raised this with several Company representatives, including his supervisor, the Health and Safety Manager and the Human Resources Department. Mr Baranya claimed that these statements amounted to protected disclosures under S.5 (3)(d) of the Act - that his health and safety was being endangered. The Company disputed this and argued that the issue did not amount to a protected disclosure for the purposes of the Act and was more appropriately categorised as a grievance. The Labour Court agreed with the Company on the basis that there was no “relevant wrongdoing” on the part of the employer and Mr Baranya appealed the decision to the High Court on a point of law.

Protected disclosures are a complex area of law and establishing whether a disclosure amounts to a protected disclosure for the purposes of the Act is not straightforward. The outcome will determine if the employee is afforded the protective rights available under the Act. These cases provide helpful guidance on the practical application of the Act.

In circumstances where a disclosure is made to you as an employer, professional legal advice is strongly recommended before proceeding with, or concluding, any internal processes.

For expert advice on this please contact a member of our Employment & Benefits team.