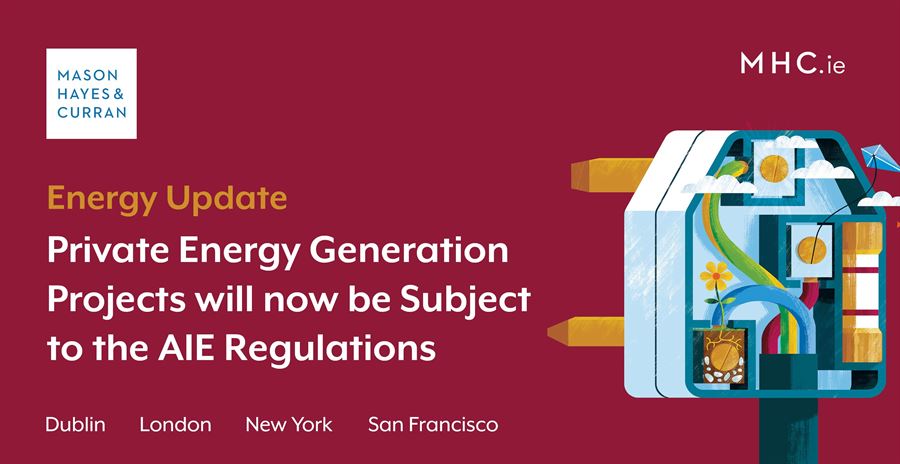 The Commissioner had found that an Independent Power Producer (IPP) namely, Raheenleagh Power DAC (RP), was not a “public authority” within the meaning of the European Communities (Access to Information on the Environment) Regulations 2007 (the AIE Regulations). Therefore, any information held by RP was outside the scope of the AIE Regulations.

The AIE Regulations transpose Directive 2003/4/EC on public access to environmental information. The Directive was enacted by the EU to give effect to the provisions of the Aarhus Convention. The purpose of the Convention is to ensure that members of the public have sufficient access to information in order to be able to participate in decision-making by public authorities affecting the elements of the environment.

RP is a joint-venture company which operates a wind farm in County Wicklow. The issued shares were originally divided equally between Coillte and a subsidiary of ESB. Coillte provided the site for the wind turbines and ESB provided construction and electricity generation expertise. RP was granted a licence to generate electricity and an authorisation to construct the wind farm under Sections 14 and 16 of the Electricity Regulation Act 1999 (the 1999 Act). In 2018, the Coillte shares in RP were sold to a private company. Responsibility for the day-to-day operation of the wind farm has been delegated by RP to an ESB subsidiary.

In May 2017, Right to Know, an NGO seeking to further public access to information, requested data relating to wind turbine noise from RP under the AIE Regulations. The AIE Regulations operate to provide the public with the right to access environmental information held by public authorities. The request was refused by RP. The refusal was upheld by the Commissioner on the basis that RP was not considered a “public authority” within the meaning of the AIE Regulations. The refusal was appealed by Right to Know to the High Court.

Article 2(2) of the European Directive 2003/4/EC on public access to environmental information provides:

“Public authority shall mean:
a) government or other public administration, including public advisory bodies, at national, regional or local level
b) any natural or legal person performing public administrative functions under national law, including specific duties, activities or services in relation to the environment; and
c) any natural or legal person having public responsibilities or functions, or providing public services, relating to the environment under the control of a body or person falling within (a) or (b).”

The question for the Court was essentially whether RP fell within subparagraphs (b) and (c) of Article 2(2).

In relation to the ‘control’ criteria, the Court found that at the time that RTK called for the information to be provided to it, either ESB or Coillte acting alone or together was in a position to exert decisive influence on the actions of RP in the environmental field.

Accordingly, RP satisfied the criteria for the application of the test under Article 2(2)(c) of the Directive and was itself a ‘public authority’ for the purposes of the AIE Regulations under that heading.

Referring to Fish Legal, the Court stated that the definition of “public authority” for the purposes of Article 2(2)(b) included:

“administrative authorities defined in functional terms, namely entities, be they legal persons governed by public law or by private law, which are entrusted, under the legal regime which is applicable to them, with the performance of services of public interest, inter alia in the environmental field, and which are, for this purpose, vested with special powers beyond those which result from the normal rules applicable in relations between persons governed by private law.”

This was clear from the fact that such entities once they had obtained the necessary authorisation from the Commission for the Regulation of Utilities (CRU) to construct an electricity generator had ‘special powers’ over and above those which would apply to other private entities. These included the ability to acquire compulsorily private property rights in order to deliver electricity infrastructure in the public interest. The rights being referred to here are the ‘step in rights’ which ordinarily reside with the ESB. They are afforded to IPPs through the granting of ‘Special Orders’ or CPOs by the CRU under Section 45 of the Electricity Supply Act.

The Judge held as follows:

The decision heralds a significant new departure in relation to the rights of access of members of the public to information in relation to renewable energy developments. While it was anticipated that RP would have been found to have been a public authority in view of its control by two established public authorities in the form of ESB and Coillte, the fact that the decision of the Court has gone much further and found that all privately owned IPPs with authorisations under the 1999 Act are now to be considered ‘public authorities’ for the purposes of the AIE Regulations was not anticipated.

The decision of the Court potentially brings all information held by IPPs within the ambit of the AIE Regulations, in so far as they are performing services or activities in relation to the environment. The operation of a wind or solar farm will therefore fall within the range of activities subject to the AIE Regulations. There will be a clear link between such operations and the definition of ‘environmental information’ as the construction and operation of such renewable energy developments are an ‘activity’ or ‘measure’ capable of affecting the elements of the environment.

At the time of writing it is not clear whether the Commissioner or RP intend to appeal the decision.

The application of far reaching information access provisions in the form of the AIE Regulations to the renewable energy industry will be a significant practical and logistical issue for the sector.

It will potentially subject all internal communications concerning development of renewable energy infrastructure to public access, subject to certain defined exemptions under the Regulation. Those exemptions, which include the potential to withhold the release of information concerning commercially sensitive material, are interpreted on a restrictive basis.

There has been a considerable expansion in recent years on what constitutes ‘environmental information’. While the information requested in the Right to Know case concerned wind turbine data and noise emissions, the scope of the AIE Regulations as interpreted in the Courts extends far beyond this. The Court of Appeal in 2020 delivered a very important decision in Redmond v Commission for Environmental Information which found that any information “on” an activity or measure affecting the elements of the environment would potentially come within the scope of the Regulations. For a sector whose main concerns are developments affecting or impacting on the environment, it is clear that this decision will be of profound importance. It will potentially expose all internal communications, including management decision making, to release.

The AIE Regulations operate to apply to all environmental information ‘held by or for’ the public authority. While it would appear from the decision that the operative date for an IPP to be considered as a public authority would be the date of receipt of an authorisation to construct a generation station from the CRU, the AIE Regulations will apply to all environmental information held by the IPP as of that date, regardless of when such information was generated. The implications of this for IPPs are therefore of huge significance.

It is unlikely that the extent of the ruling will allow for a ‘reach back’ effect to the corporate entity controlling the IPP. However, the implications of what environmental information may be ‘held by or for’ the IPP by a holding company would have to be explored further, as information held by a private company ‘on behalf of’ a public authority may come within the scope of the Regulations.

At the very least, the application of the AIE Regulations to private renewable energy developers will require additional resources in many cases to be allocated to responding to information requests. However, if the decision is not successfully appealed, it is likely to become a seminal decision in relation to the operation of the renewable energy industry in Ireland.

If you wish to discuss this proposed scheme, please contact a member of our Energy, Utilities & Projects team.