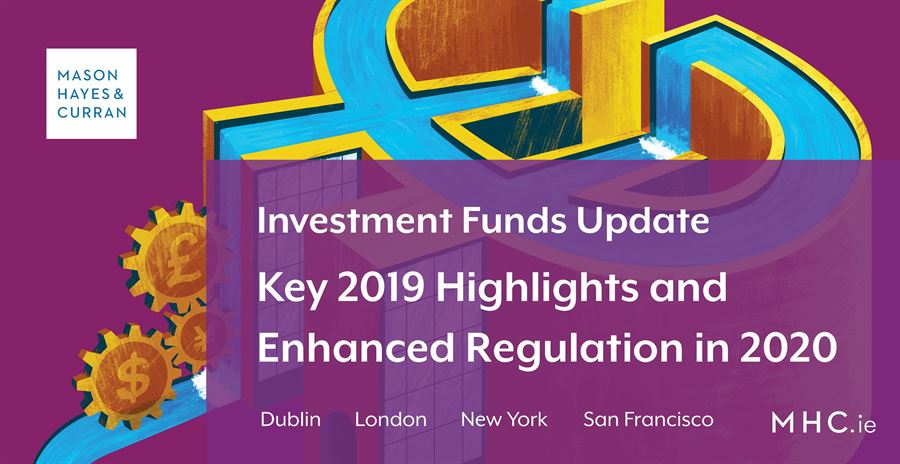 There were a number of significant developments of 2019, such as the renewed focus by the Central Bank on its Fitness and Probity Regime with the issue of its “Dear CEO” letter in April and the issuing of a prohibition notice in September. With environmental sustainability being a hot topic, we also review the new proposals coming down the line for AIFMs and UCITS Managers to implement sustainability risks in their organisation. Most recently, we saw new developments emerge for Irish domiciled funds with increased scope to invest in China’s financial markets following an announcement in the autumn to remove investment quotas by the Chinese State Administration of Foreign Exchange.

The Central Bank of Ireland issued a “Dear CEO” letter to all regulated financial service providers (RFSPs) in April 2019. The letter highlighted key concerns relating to:

The letter applies to all RFSPs, which includes collective investment schemes, fund management companies and their service providers.

Following the publication of a European Securities and Markets Authority (ESMA) consultation paper, at the request of the European Commission, ESMA proposed changes to the text of the UCITS Directive and AIFMD that govern the activities of Fund Management Companies (FMCs).

In particular ESMA’s proposals will impose new requirements on FMCs to integrate sustainability risks within their organisations and will apply to the organisational structure, resourcing, senior management oversight, conflict of interests, investment due diligence and risk management processes of FMCs.

This will require FMCs to review their policies and procedures to ensure that sustainability risks and factors are fully integrated in their decision making processes.

The changes that ESMA proposed to the UCITS Directive and AIFMD should be seen as part of a broader series of regulatory initiatives that are designed to promote investment activity that takes into account Environmental, Social and Governance (ESG) considerations. As the Central Bank recently commented, ESG will be a growing focus for the Central Bank over the coming years and the industry is advised to be proactive in considering and adopting new models to take account of sustainability risks, and ESG considerations.

Further information can be obtained here.

Opportunities for investment firms in China

In December 2016, Ireland was granted a quota of RMB 50 billion on the RQFII scheme which is accessible via applications made by Irish fund management companies. The proposed reform will remove the quota entirely.

According to SAFE, the regulations will soon be revised, removing any requirement on foreign institutional investors to apply for QFII and RQFII quotas and for those investors with an existing quota, they will not be limited to that quota. In future, foreign institutional investors meeting the regulatory qualifications will only need to go through the RQFII registration procedure through a domestic custodian bank. This proposal provides a more convenient mechanism for Irish funds to access China’s bond and stock market.

We explore this development in more detail here.

We expect to see the Investment Limited Partnership (Amendment) Bill 2019 progress through the legislative process in 2020. When enacted it is hoped that Ireland will have an up-to-date regulated partnership vehicle that is suited to the current needs of the private equity community and which will serve as a viable alternative to other Irish investment fund structures.

We also expect to see the framework for the treatment, correction and redress of errors in investment funds gain shape in 2020 with the Central Bank's part 1 consultation phase expected to close in December 2019.

Unsurprisingly, Brexit, and its implications will continue to be a hot topic in early 2020 with the deadline being extended to 31 January 2020. For funds wishing to avail of the Financial Conduct Authority’s (FCA) Temporary Permissions Regime, they should note that the notification date has been extended to 30 January 2020.Fund managers have until 15 January 2020 to inform the FCA if they want to make changes to their existing notification.

For more information on what can be expected in 2020 and any issues impacting your organisation, contact a member of our Investment Funds team.