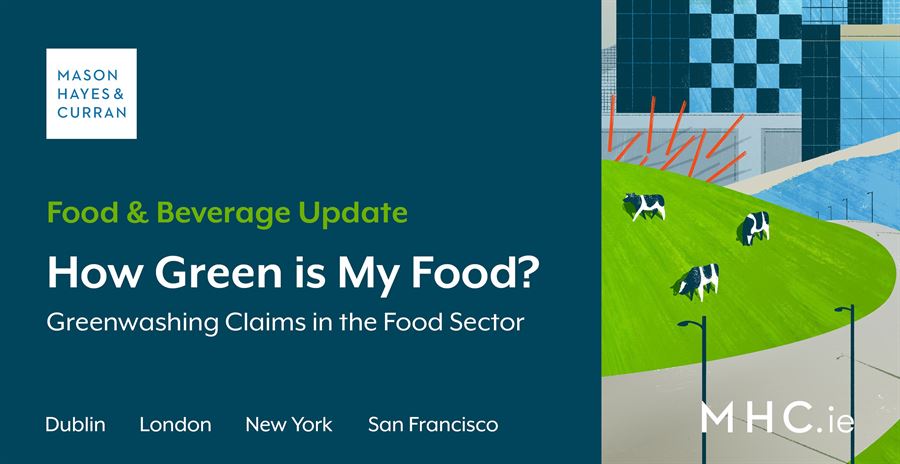 “Greenwashing”, or making unsubstantiated environmental claims for a product, has come under the spotlight from EU regulators and commentators during the past year. We look at the frequency of greenwashing claims in the EU food and beverage sector, the current regulatory position and anticipated developments in the EU.

Greenwashing involves misleading consumers as to the sustainability of a product, or claiming to consumers that it is doing more to protect the environment than it really is. This may involve using vague and general statements such as “eco-friendly”, “sustainable” or “green” when marketing their product to consumers. In the food sector, the term “organic” has been used in a similar manner often without providing the consumer with a clear definition of what this actually means. These types of statements can give the misleading impression that a product has little to no negative impact on the environment.

Fiji Water for example, was criticised for over-emphasising its green credentials. One of its advertisements claimed, “every drop [of water] is green” while another stated “Fiji water purchase helps reduce carbon emissions and protect Fijian rainforest”. Environmental groups have argued that these claims are designed to create an eco-friendly image of the brand rather than representing a significant commitment to environmental causes.

How common is it?

The International Consumer Protection Enforcement Network carried out a study of 500 websites and found that 4 in 10 appeared to be deploying tactics that could be misleading, by making vague environmental claims as well as by hiding or omitting certain information in their advertisements. An EU Commission review that screened hundreds of websites found that over half of the “green” references lacked evidence. After further analysis the Commission report found reason to believe that 42% of reviewed cases may qualify as false or deceptive.

Even Bord Bia’s “Origin Green” sustainability programme, has been described as “more about greenwashing than promoting genuine sustainability” by An Taisce.

The consumer impact of sustainability claims is significant. A Eurobarometer public consultation carried out in 2020 revealed that consumers are willing to pay more for a product that they believe to be sustainable. 9 out of 10 consumers said that protecting the environment was important to them when choosing products.

In addition, the Advertising Standards Authority of Ireland’s Code, a non-binding code for advertisers, requires that “advertisers should satisfy themselves that they will be able to provide documentary evidence to substantiate all claims”. This will also apply in the context of an ‘environmental’ claim. An environmental claim is defined as any statement, symbol or graphic that indicates an environmental aspect of a service, product, component or packaging, and includes references to sustainability, recycling, carbon neutrality, energy efficiency, use of natural products or impact on animals and the natural environment. Environmental claims should not be used without qualification unless advertisers can provide evidence that their product will cause no environmental damage.

Food brands should be aware that unsubstantiated “greenwashing” claims could be found to breach Irish consumer protection legislation. As a result, by engaging in this practice, they could expose themselves to enforcement action from the Competition and Consumer Protection Commission. However, as of yet there has been little enforcement of the laws relating to sustainability claims in Ireland, and it is developments in other countries and at EU level that demonstrate to us how this issue will develop in the near future.

So what’s new on greenwashing?

In November 2020 the EU launched its ‘New Consumer Agenda’, which listed the green transition as one of its key priority areas. The Commission report into “greenwashing” claims will feed into a new initiative to ‘empower consumers in the green transition’. This aims to better inform consumers on the environmental sustainability of products. We can expect early action on this front, with the Commission planning a new regulation or directive to more specifically tackle greenwashing in 2021.

Moves to tackle greenwashing and protect consumers have already been taken at national level:

We anticipate that these national actions will feed in to the legislation being drafted by the EU Commission.

It is also worth noting that the Unfair Commercial Practices Directive is one of four EU Consumer Protection laws that will be strengthened by the Omnibus Directive. From May 2022, consumer protection authorities will be able to impose higher-level penalties and GDPR style fines of up to 4% of annual turnover or at least €20 million for widespread breaches of certain consumer protection laws, including unfair commercial practices, thereby increasing the importance of traders getting their “green” claims right.

Food and beverage companies should be aware of the increased focus on “green” claims, with consumers and regulators more likely to challenge incorrect or unsubstantiated claims. Traders should take care not to push the boundaries too far when making green claims on their products or in advertising. The ASAI Code, and the guidance from the Netherlands Authority are useful reference points even before the anticipated EU directive later in 2021. Traders should especially be prepared for the higher-level penalties in the EU Omnibus Directive from May 2022.

For more information on greenwashing and the potential impact of misleading claims, contact a member of our Food, Agriculture & Beverage team.