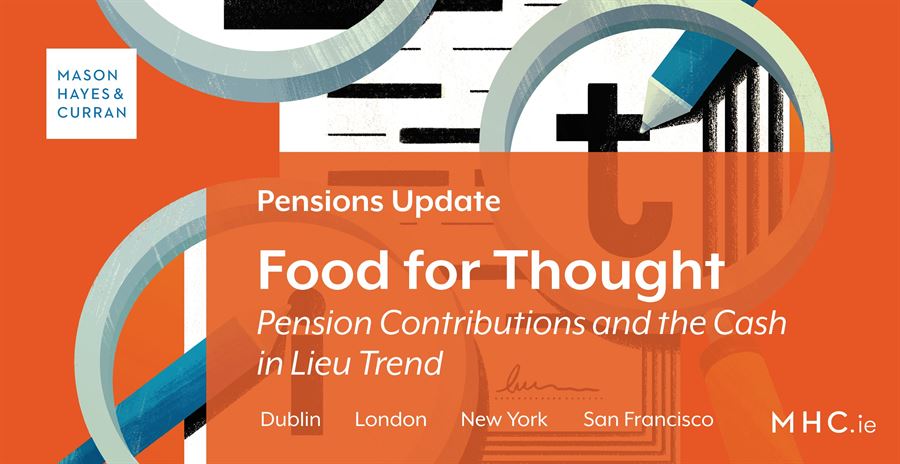 There has been a growing trend in Ireland over a number of years of providing cash in lieu of pension contribution for high paid executives who are approaching or have breached the standard threshold.

This has been common in the UK and has recently become a contentious issue in Ireland for the food giant Greencore. Over a third of its shareholders voted against a cash in lieu payment for its chief executive, which equated to 35% of his salary as well as a pension contribution equating to 25% of salary for its chief financial officer. Greencore’s shareholders had been advised to vote against the proposed payment and contribution by a corporate governance firm. The company are now considering what actions need to be taken in light of the high percentage of shareholders that voted against the remuneration policy.

An executive trend – spotlight on the UK

In 2019 Lloyds Bank Group came under pressure from Parliament over excessive cash in lieu of pension payments. The Group’s CEO received 33% of his salary in the form of a cash payment in lieu of pension membership. Parliament’s work and pensions select committee (Committee) suggested in a letter to the Group that the payments contravened the pay policy of the corporate governance code and the Investment Association’s (IA) guidelines. The suggestion is that the payments represent backdoor remuneration for the retention of highly paid executives. A letter from the Committee to the IA even asked whether it would be beneficial for a restriction on executive pension contributions to be put into law.

However, many argue that a series of changes to UK pension tax relief has driven high earning executives away from pension membership and towards alternative remuneration arrangements with their employers such as the payment of cash in lieu of pension participation.

There is a concern that this trend will take the senior executive focus away from company pension schemes. This eventuality is unlikely to be good news for ordinary workers who will still rely on membership of these schemes as a key component of their remuneration packages.

Greencore’s shareholders were advised by Institutional Shareholder Services (ISS) that the proposed cash in lieu payment and pension contribution were “out of step with the market’s direction…..following the publication of the 2018 UK corporate governance code”. At the same time it is known that a further corporate advisory firm recommended that shareholders accept the revised remuneration policy. Though 68% of the shareholders voted to adopt the remuneration policy, Greencore’s Chairman noted that “there’s definitely a message there. Any time you get less than 80% of the vote you’ve got to listen to the mood music”.

In Ireland, an earnings limit of €115,000 per annum exists for all contributions made by an individual in a tax year and this limit has been in place since 2011. This applies on an aggregate basis, so the limit exists whether an individual is contributing to just one pension scheme or a number of pension arrangements. As well as this there are age related percentage limits which increases gradually with age to a maximum of 40% of net relevant earnings for those 60 years of age and older.

Employer contribution limits for occupational pension schemes are linked to the relevant employee’s earning, service and the overall funds accumulated in their pension(s). While the maximum amount that an employee aged 60 or over can contribute is €46,000 (or 40% of €115,000). An employer that operates an occupational pension scheme can contribute as much as is necessary to provide an employee with the maximum benefits permitted by Revenue at retirement.

In Ireland there is also a Standard Fund Threshold (SFT) to consider which is currently set at €2 million. A chargeable excess will arise where the SFT is exceeded. The SFT was first introduced in 2005 and was set at €5 million before being reduced to €2.3 million in 2010. A further reduction occurred in 2014 when the SFT was set to its current level of €2 million.

The trend towards allowing cash in lieu of pension membership and contributions for highly paid executives will continue to be topical and there is the possibility that, in the UK at least, we will see the introduction of legislation that will look to cap the level of salary that an executive can take annually in this manner.

Memories of the credit crisis and the recession are still very fresh and many will recall the heated debates around bonuses paid to banking executives and the calls to decouple financial performance and bonus. EU regulation such as the Alternative Investment Fund Managers Directive requires all managers that fall within its scope to have remuneration policies and practices that separate risk taking and remuneration.

We will continue to monitor the cash in lieu situation with great interest, paying particular attention to how these proposed payments are dealt with by boards and shareholders of large listed companies.