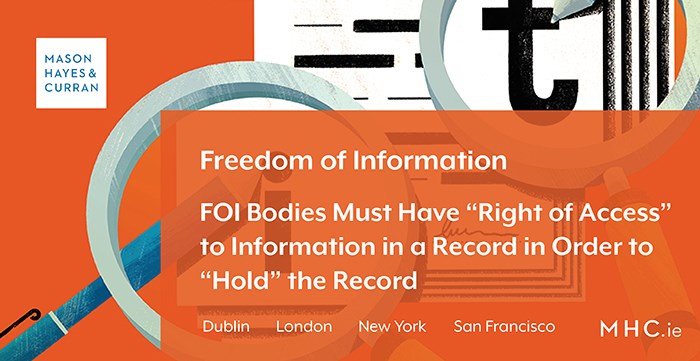 The Supreme Court recently overturned an Information Commissioner decision requiring the Department of Health to provide a requester with access to a transcript of an interview the requester had given to a retired judge conducting an inquiry. The Court held that, as the Department did not have a “right to access” to the information in the record in question, it did not “hold” it for the purposes of the FOI Act.

The appeal to the Supreme Court concerned an FOI request made to the Minister for Health for access to a transcript of an interview the requester had given to a retired judge in the context of the so-called “Drogheda Review”. The inquiry in question centred on allegations of sexual abuse in Our Lady of Lourdes Hospital, Drogheda. The request was made under the FOI Act 1997, as amended, but the provisions at issue are the same as the corresponding provisions of the current FOI Act 2014.

Following the conclusion of the judge’s review, both his notes and transcripts of various interviews were deposited with the Department of Health in boxes. The boxes were sealed with an instruction by the judge that their contents were not to be disclosed “except by a court order for discovery”. The Department refused the FOI request on the basis that the judge had furnished the records “in the strictest stipulations of confidentiality”, and the Department was merely a “depository for the documents”. The Department determined that the records were not in its control, and were therefore not “held” by it for the purposes of the FOI Act.

The High Court disagreed with the Commissioner’s interpretation of the term “held”, and found that the Commissioner’s decision that the Department held the record was wrong in point of law. In that regard, Mr Justice O’Neill took the view that to hold that “mere lawful possession” of a document made it amenable to disclosure under the FOI Act would give rise to “absurd and wholly unintended consequences”. In the High Court’s opinion, for a document to be held it must be:

The primary issue on appeal was the correct interpretation of the expression “record held by a public body” for the purposes of the FOI Act. The Supreme Court held that, in order for a record to be held, the public/FOI body must be:

As regards the second criterion, the Court held that the Commissioner had erred in failing to be satisfied by the evidence of the Department to the effect that it had no entitlement to access the information in the record concerned. If it had no such entitlement - and given that the right of access exists so as to give access to information contained in records - the record could not, on a proper construction of the FOI Act, be considered to be “held” by the Department within the meaning of that Act.

However, in a significant departure from the decision of High Court, the Supreme Court did not feel that a record had to be free from “any prior legal prohibition affecting its disclosure” in order to be “held” by an FOI body. The Court agreed with the submissions of the Commissioner that such a requirement would not only be inconsistent with the scheme of the Act but would also have the potential, in practice, to exclude a large number of records from the ambit of the Act on the basis of a third party claim that there was a prior legal prohibition affecting disclosure. Rather, the Court held that questions of confidentiality, or disclosure to third parties, should form part of the consideration of the separate and distinct questions of whether a record was an “exempt record” or could otherwise lawfully be withheld under the FOI Act, and were not relevant in determining whether a record was “held” by an FOI body in the first place.

Conclusion – narrowing the scope of FOI?

The decision of the Supreme Court clarifies the scope of FOI and identifies the threshold required in order for an FOI body to “hold” a record. This could lead to a potential narrowing of that scope, because the Court determined that, in addition to being in lawful possession of a record in connection with, or for the purpose of, its business or functions, in order for a body to “hold” the record, there was a necessarily implied requirement that it also be entitled to access to the information in the record.

In relation to the access requirement, the decision of the Court in this case could be said to be based on its own, perhaps unusual, facts, and may therefore, in practice, have a limited impact generally. In this regard, for a party to rely on this decision to exclude a record from the ambit of the Act, it would be necessary to establish as a matter of fact and/or law that the public body could not “access” the information in the record concerned. It must be doubted as to whether this is likely to arise in the majority of situations where a public body procures or controls, and is in lawful possession of, records in connection with, or for the purpose of, its business or functions. However, where this does arise, it will be a complete bar to a requester obtaining access to the records requested, as the FOI body will be deemed not to hold the records at all.

While this has not yet been tested, it is possible that the decision of the Supreme Court might also assist in difficult cases where an FOI body has physical possession of records, or shares an electronic database with a separate entity, or a non-FOIable element of itself, and where it is claimed that the FOI body nevertheless “holds” the records concerned. Here, the two-pronged Supreme Court test of when a right of access to the information in the records exists should make it easier to show clearly whether the records fall one side of the line or the other.

For more information on these developments and how they might affect your organisation in submitting or receiving records, contact a member of our Freedom of Information team.