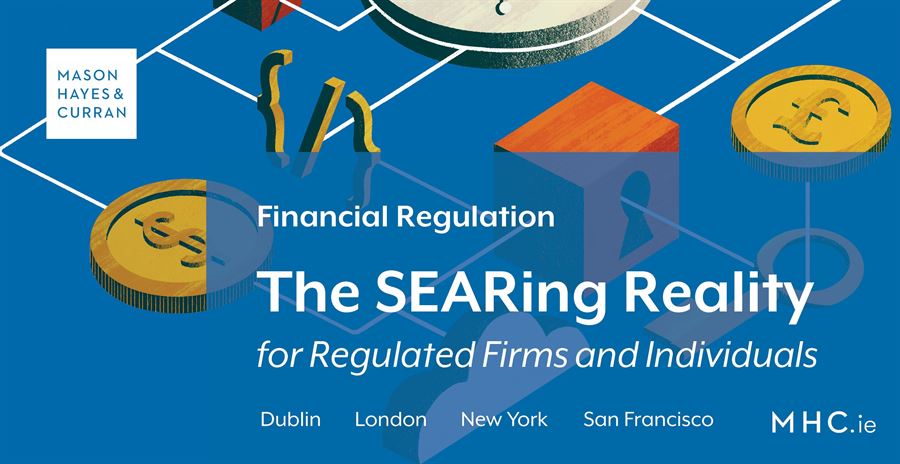 The Central Bank of Ireland (CBI) has advocated for culture change across the financial services sector in the wake of the financial crisis. The Central Bank (Amendment) Bill, once drafted, is hoped to answer “the burning question” on how culture reform can be implemented and public confidence can be restored.

The Bill is expected to do the following:

The Minister for Finance described SEAR as “a key driver” of cultural change. It is expected to apply to banks, insurers and certain investment firms who will be required to memorialise responsibilities of key individuals and actively oversee the monitoring of conduct standards. Ireland will be following the UK and Australia, which have introduced similar regimes.

SEAR will ensure there is greater accountability for individuals. Through the introduction of conduct standards, the CBI may pursue individuals directly without first having to prove wrongdoing by a firm.

It will operate alongside the current fitness and probity Regime, but will impose much stricter standards. It was described by Derville Rowland, Director General of Financial Conduct at the CBI, as reducing “the chances of key people in firms being able to wash their hands of wrongdoing”.

In the CBI’s report on “Behaviour and Culture of the Irish Retail Banks”, it is proposed that SEAR apply to the following:

It is expected that the Bill will be published early next year following a public consultation.

The UK SMCR sets the standards of governance and accountability in the UK, which is overseen by the UK’s Financial Conduct Authority (FCA). Introduced in 2016, the SMCR imposed “Conduct Rules” on senior managers of certain regulated firms. Since early December 2019, the SMCR has applied to almost all UK regulated firms including asset managers, private equity houses, fund managers and regulated advisors. Similarly, SEAR will apply to “all regulated firms” from the outset of its introduction.

The Conduct Rules include the requirement to “act with integrity” and “due skill, care and diligence”. Derville Rowland has indicated that SEAR will follow that framework, imposing five clear and enforceable conduct standards. The FCA described the purpose of the SMCR as enhancing culture and trust, rather than enforcement. In practice, the FCA delegates the monitoring of Conduct Rules to the financial institutions that it regulates.

In response, firms introduced ‘conduct teams’ to investigate and report on any potential breaches. Much of the monitoring of the SMCR takes place confidentially between those lawyers and the FCA through informal collaboration. For that reason, public reporting of Conduct Rule breaches is rare. James Staley, Chief Executive of Barclays, is one of the few individuals to have been publically sanctioned under SMCR. He received a fine of £642,430 for attempting to uncover the identity of a whistleblower.

It remains to be seen to what extent the CBI will trust institutions to investigate and monitor conduct standards. Given the approach to enforcement taken to date, it is anticipated that the CBI will take a more proactive role in the monitoring of potential breaches, until broader public trust in the financial services sector is established.

In 2018, BEAR was introduced in Australia to increase accountability for senior management in the financial services sector. BEAR requires banks and certain executives to meet “accountability obligations” similar to the UK’s Conduct Rules.

A breach under BEAR can render individuals liable for up to AU$42 million for each breach; there is no requirement to act dishonestly as individuals can be liable without realising their activities constituted a breach.

The Governor of the CBI, Gabriel Makhlouf has said that bankers will be held to account under his leadership. He is keen to eliminate the bad practices of the past. This is synonymous with the desired effect of SEAR, that firms and their staff should take greater responsibility for their actions.

Irish firms should start to prepare for what lies ahead. Certain individuals will need to be identified as senior managers and firms must articulate exactly for what those individuals are accountable. Firms will need to consider appointing lawyers to investigate potential breaches. These organisational changes will take time; however, firms should avail of the opportunity to best position themselves for the forthcoming changes.

Our lawyers have significant expertise in the implementation of both the SMCR and BEAR, which is unique in the Irish market. If you would like to discuss any of the points highlighted, please contact a member of the Financial Regulation or Investigations & White Collar Crime teams.