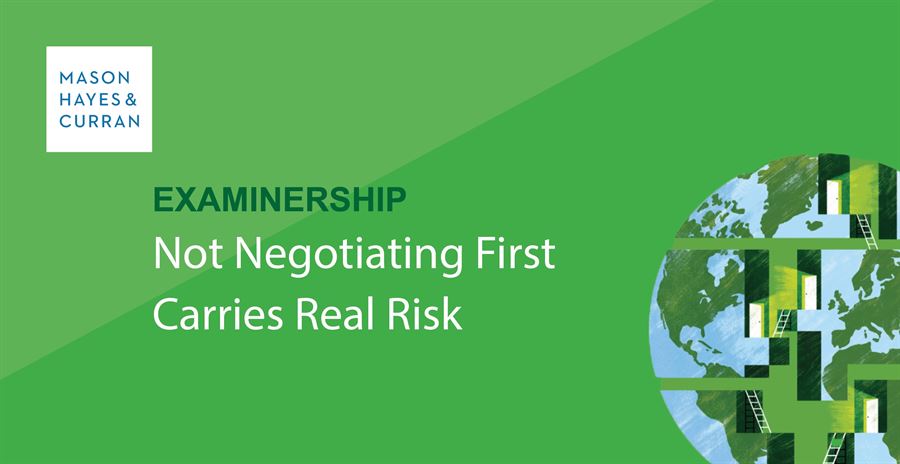 The High Court refused to appoint an examiner to New Look Retailers (Ireland) Ltd (New Look), where it transpired that it had sufficient funds to survive for a number of months but had not engaged substantively with creditors before applying for the appointment of an examiner.

New Look operates 27 stores in Ireland, all of which are rented. It closed its stores 2 days before the Government mandated lockdown in March.

On 28 August, New Look petitioned for the appointment of an examiner and an interim examiner was appointed. Three landlords objected to the appointment, a number of affidavits were filed and the petition was heard in full at the end of September.

In essence, the landlords contended that New Look did not meet the statutory insolvency test for the appointment of an examiner and that even if it did, the court should exercise its discretion not to appoint an examiner.

This was against a background where New Look:

The Court found that there was sufficient evidence to come to the view that New Look would become unable to pay its debts as they fall due during the first half of 2021 and therefore the statutory insolvency test was met.

Accordingly, the Court had discretion to appoint an examiner or not.

Whether or not to exercise discretion

When the petition was presented it was asserted that New Look would be insolvent within two months. However, it was apparent on the figures before the court that it had sufficient cash for 6 months or more before it would become cash flow insolvent.

New Look argued that it needed to reduce its rent obligations. It asserted that in negotiations outside examinership the landlords have “the stronger hand because of course we can’t break those leases …”. However if an examiner is appointed, it would be possible to repudiate leases, subject to the consent of the Court and that this would rebalance the power in any negotiations to reduce rents.

The Court found that “there was no substantial attempt made on the part of the Company to initiate any process of negotiation with landlords”.

Ultimately, the judge declined to exercise his discretion to appoint an examiner, stating:

“It seems to me that, before taking the very serious step of seeking the appointment of an examiner, a company which is not currently insolvent, should, in the first place, make serious efforts to explore less drastic options. … it is inexplicable that the Company did not take more proactive steps … to resolve its differences with its landlords. As it happens, there is still time for serious negotiations to take place before insolvency looms more immediately in sight. I am of the view that this requires to be explored before seeking the intervention of the court.”

Examinership can, and usually does, significantly impact on creditors’ rights. This is justified on the basis that its purpose is to enable enterprises to survive for the benefit of the economy as a whole and to preserve employment. Equally, it typically results in a better outcome for creditors than an alternative insolvency process.

It was not designed to assist shareholders who have made unsuccessful investments or taken leases that they now regret.

What is clear is that, funds permitting and absent any other urgent reason, companies should attempt to reach agreement with their creditors, or at least their larger creditors, before seeking the appointment of an examiner.

However, had New Look been closer to being cash flow insolvent or made a real attempt to negotiate with its landlords, even over a short period of time before the petition was presented, it appears likely that an examiner would have been appointed. The Court has not ruled out a further application, if negotiations fail.

For more information and expert guidance in all related matters, contact a member of our Restructuring & Insolvency team.