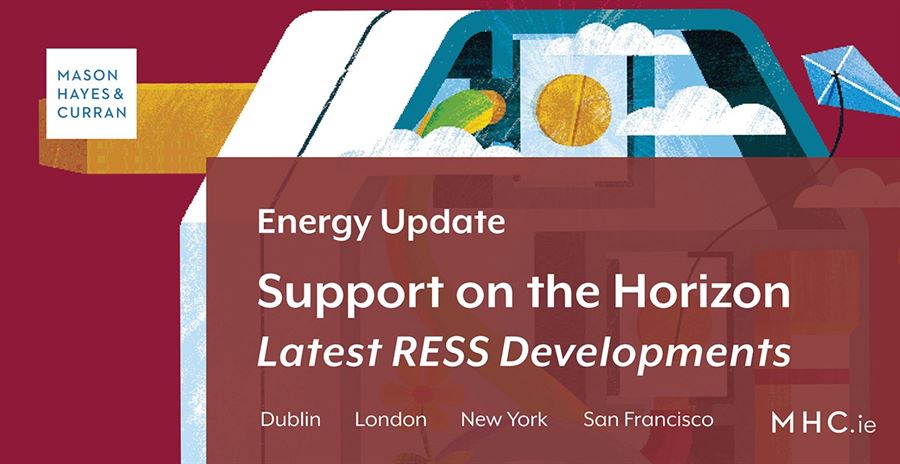 At an industry forum on 13 September 2019 the Department of Communications, Climate Action and the Environment (DCCAE) provided an update on the design of the Renewable Energy Support Scheme (RESS) and the timelines for its implementation. We outline some of the key features of the DCCAE update and offer some observations.

The Department confirmed that the RESS 1 auction would take place “within the timelines set out in the Climate Action Plan”. Specifically, the programme is as follows:

It appears from the update that the detailed design won’t be complete until December 2019. The DCCAE has, however, provided an update into the various aspects of the RESS 1 auction that we expect will be reflected in that detailed design.

Support to successful projects will be provided through a two-way contract for differences (CFD) arrangement around a “floating feed in premium”, comparing a strike price with a reference market price, on the basis of the project’s metered output. The payment structure is to be settled through to PSO process in a manner “similar to the current REFIT settlement” process and will require a PPA with a licensed electricity supplier. So-called “supplier lite” structures will also be compliant.

This design feature is slightly surprising. The design of the SEM wholesale electricity market has a strong “plug and play” ethos, and it is not clear why RESS support could not simply have been awarded by requiring successful projects to sell directly into the wholesale market, in parallel with the provision of a CFD with a strong central counterparty. Entry into a PPA was indeed a requirement for REFIT-supported projects, but even that structure was widely regarded as an anachronism that pre-dated the SEM. While the PPA structure has served the industry well in providing a conduit for the support of renewable generators, we are surprised to find it continuing into a new era.

The actual auction quantity for RESS 1 is still yet to be determined. The DCCAE has suggested it may be within the range of 1,000 GWh - 3,000 GWh. The process to determine the final quantity is itself to be set out in the final design.

How to measure it

One aspect of the high level design of the RESS that had given us pause for thought is that the DCCAE tends to frame the “size” of the scheme in terms of output volume (GWh) rather than generation capacity (GW). This could potentially lead to problems for successful projects, if their support expired upon the delivery of a certain output volume, as it would be very difficult for a project to predict when this might happen, and to tailor its project financing accordingly.

However, the latest DCCAE update has confirmed that while output volume will be important in setting aggregate targets for the RESS scheme, these output targets will not affect the “settlement” of individual projects. Technology-specific capacity factors will be used to convert the output volume targets into GW capacity targets, and any project that is successful in falling within the capacity to which support will be allocated, will have its CFD settled based on metered generation.

A bond will be required by eligible participants in advance of offer submission. The “bid” that each participant will be required to make, will be the strike price that will apply to its CFD if its bid is successful – i.e. each successful project will be “paid as bid”. “Winners” of the auction will be selected, on a technology-neutral basis, by ordering bids in ascending price order.

“Pay as bid” may come as a disappointment to some, as “pay as cleared” was initially indicated in the RESS high level design paper. There is some speculation that “pay as bid” is seen to open the door to corporate PPA support through the “stacking” of revenue. However, the practicalities of this are not particularly obvious, as power should not be sold twice and in accordance with the Implementation Agreement, discussed below, it is intended that a RESS-supported generator would waive its right to receive Guarantees of Origin for the power generated.

DCCAE have issued some interesting comments on the eligibility criteria, including:

Successful bidders will be required to enter into an implementation agreement, which will confirm the project will be entitled to receive a letter of offer and this will enable the project to execute a PPA with an electricity supplier. It is anticipated that support for a successful project will last up to 15 years.

As expected, there is a requirement that a successful project pays €2/MWh into a community benefit fund, and that this money will fund selected local causes, with priority given to causes situated within 10 kilometres of the project. The fact that this is levied on a per-MWh basis means that the community levy is being applied proportionally between different technologies. The earlier concerns of solar, relating to the prejudicial effect of a per-MW levy due to the technology's relatively low capacity factor, should therefore not apply.

A successful project will need to demonstrate that this fund has been established within 120 days after the RESS offer implementation agreement has been entered into. This fund is to be set up and coordinated by developers with certain administrative requirements imposed by the DCCAE. Many developers will be familiar with the types of structures required for a community benefit fund of this nature, including the appointment of community liaison officers and websites with project information and committee details. The administration of funds of this nature, however, should not be under estimated.

A requirement for a community investment scheme remains as part of the auction qualification requirements – including a declaration by the developer that those requirements will be met or even exceeded. However, the DCCAE has indicated that the satisfaction of this investment requirement does not necessarily require an equity proposal. The final details are to be included in the RESS information pack.

The latest update from DCCAE on the RESS timelines and an outline of the anticipated detail design of the RESS auction scheme is a very welcome development in the Irish renewable energy sector. It is critical that the Government maintains the momentum of the RESS scheme to ensure the continued efficient deployment of renewable generation in Ireland at some of the lowest costs to consumers seen globally. Any prolonged delay to the introduction of the scheme may result in disruption to the supply chain and availability of skills and experienced practitioners in the sector.

For more information on this latest RESS update, contact a member of our Energy, Utilities & Projects team.