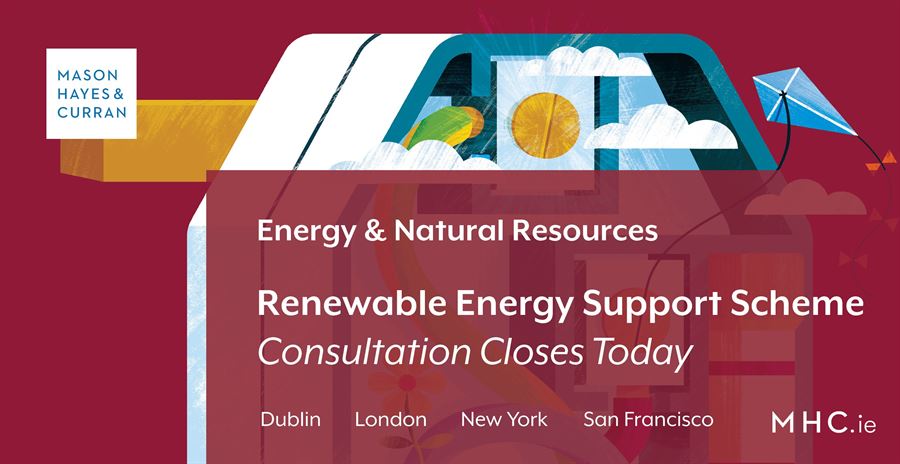 A major step in the implementation of the Renewable Energy Support Scheme (RESS) was the publication, in December 2019, of the draft scheme Terms and Conditions for public consultation. The consultation closed on Friday 17 January 2020.

The RESS briefing on 16 January 2020 included an engaging and helpful dialogue in connection with the RESS auction scheme generally. To assist stakeholders who are interested in responding to the consultation, we set out below some of the more material points highlighted during the discussion which may merit submissions.

If an existing project is applying for RESS support on the basis that it will be “re-powering”, it must be able to demonstrate, amongst other conditions, that (i) none of the electricity generating equipment has previously been used at the site; and (ii) a 50% increase in installed capacity compared to the previous renewable energy generation project at that site. Given the potential difficulties in securing planning permission for projects in the context of the incoming Wind Energy Guidelines and set back distances (subject to any potential challenge to these in the context of compliance with Directive (EU) 2018/2001 the Renewable Energy Directive), demonstrating such an increase may be particularly difficult. These requirements and the definition of what constitutes a New Project do not fully align with the Renewable Energy Directive which provides for “partial” repowering and seeks to encourage and facilitate same.

Stakeholders might consider requesting a less restrictive approach to repowering in the context of RESS.

While we appreciate that genuine competition between qualified bidders is a key element of the RESS scheme, we have a concern that the existing provisions around Declarations of Independent Bidding will require projects to obtain declarations (in the form of sworn affidavits) from directors of banks and/or PPA counterparties. Neither requirement seems practical, and we consider that the concerns of the DCCAE are likely to be met through standard commercial confidentiality arrangements that are already observed.

Stakeholders might consider requesting that the DCCAE review its current approach to Declarations of Independent Bidding so that directors of banks and/or PPA counterparties will not be required to provide them.

One of the criteria for a Non-Community-led Project is to provide access to a Renewable Energy Participation Scheme for Irish citizens or not-for-profit community entities (yet to be defined) prioritising those that live in closer proximity to the applicable project, and providing prescribed rates of return (without reference to the profitability of the project). While the details of the REP Scheme are still being finalised, a significant body of work needs to be completed to provide for a structured scheme that will allow community investment without overburdening Projects with administrative and regulatory obligations (including financial regulation) while not impeding the continued use of non-recourse project finance. The finalisation of the legal, regulatory and administrative matters to facilitate a workable REP Scheme is likely to take a number of months and require significant further consultation.

Given that RESS1 is likely to focus on shovel-ready projects, whose investors are already identified with corporate structures already finalised, stakeholders might consider suggesting that the REP scheme be deferred to subsequent RESS auctions (allowing more time for its measured development).

Any attempt to impose obligations upon market participants post auction is likely to be fraught with difficulty and open to legal challenge.

Applicants must possess and demonstrate control of the Site together with a right to access the Site for the purposes of developing and operating the project. The RESS Terms state that compliance with this requirement must be evidenced by submitting a consent form (yet to be published by the TSO) signed by the landowner. This is likely to prove problematic for many developers and potentially creates additional leverage for landowners where not expressly provided for in the existing option or lease agreements.

Stakeholders might consider suggesting that a declaration confirming that the Applicant has secured all necessary access rights for the Site should be sufficient.

The RESS 1 Auction takes the form of a simple, sealed bid auction of eligible Offers. All Successful Applicants are bound by their “Strike Price” included in their Offer for the life of the support scheme, and significantly, this is not indexed. This is likely to have a greater impact on wind farms due to the higher O&M costs over the lifetime of such projects and the Non-Variable projects which rely on fuel supply. Such concerns are potentially compounded by any increase in other costs of business or taxation such as the rateable valuation applied to RESS 1 Projects. In the absence of indexation, projects are likely to inflate their bids accordingly, which is likely to run contrary to the DCCAE’s concerns about the cost of RESS.

Stakeholders might consider suggesting that RESS support be partially indexed acknowledging that the majority costs are incurred in the construction of the generation facility and need not be subject to indexation.

During any period in which the price in the Day Ahead Market is negative, the electricity generated by any project during this period will not receive any RESS support payments (and the PPA off-taker will be obliged to pay these negative prices to the market). There are very limited measures any project can employ to mitigate this risk, particularly as the project will be subject to dispatch instructions received from EirGrid.

Stakeholders might consider suggesting that this exposure be “softened” by (for example) adopting an approach that we understand is applied in Germany, whereby only once a negative pricing period exceeds 6 hours is support withdrawn.

For wind and non-wind generators participating in RESS, the installed capacity cannot exceed 120% of the Offer Quantity accepted into RESS for that particular Project. While this may be appropriate in some cases, the rationale for the 120% over installation is not clear and there is perhaps a lack of understanding of the approach adopted by different technologies.

Stakeholders might consider suggesting that over-installation permission is varied according to technology type but subject always to that which is permitted pursuant to their connection agreements.

The “Cliff Edge” and delay

The Implementation Agreement makes provision for extensions of time for events of Force Majeure; however, this is subject to an absolute long stop date of 31 December 2023 following which date the Implementation Agreement will terminate if Commercial Operation has not been achieved. The definition of “Force Majeure” included in the form of “Implementation Agreement” annexed to the RESS Terms is overly restrictive and cannot be said to align with the standard force majeure definition that will be familiar to energy sector participants. The requirement is that the event “could not have been avoided”, which is a very high hurdle. The usual (and more reasonable) standard runs along the lines that the event could not have been avoided “by means of the application of Prudent Electricity Utility Practice”. Also, the definition limits Force Majeure events to a finite and restrictive set of events, instead of the more standard approach whereby the list of force majeure events is a non-exhaustive list of examples. The Implementation Agreement expressly provides that a delay in construction or energisation of a RESS 1 Project’s grid connection is not a force majeure event.

A clear concern for any Applicant is the potential for grid connection to delay the commercial operation date of their project. Given the significant volume of projects that are anticipated to qualify for the auction there will be an unprecedented pressure on the system operators to complete grid connection infrastructure and delays to connection dates are likely. It does not seem appropriate that a delay by a system operator to complete its obligations pursuant to a connection agreement should result in a total loss of support when it is likely that significant costs will have been incurred by project participants.

Stakeholders are encouraged to make submissions to the Department that the definition of Force Majeure be widened to market standard scope, and to explicitly include grid delays.

As stated at the outset, the deadline for submissions to the DCCAE is today, 17 January 2020 at 1700h. There are aspects of the draft RESS Terms which impact significantly on the viability of the scheme and Ireland’s ambitions to achieve its renewable electricity targets. It is highly recommended that all industry stakeholders communicate their views on the draft RESS Terms, the link for which is here - Draft RESS Terms and Conditions.

There is no prescribed form of consultation submission, but the Department’s website does require the below information to be included in any submission.

For more information on these matters and others, contact a member of our Energy, Utilities & Projects team.