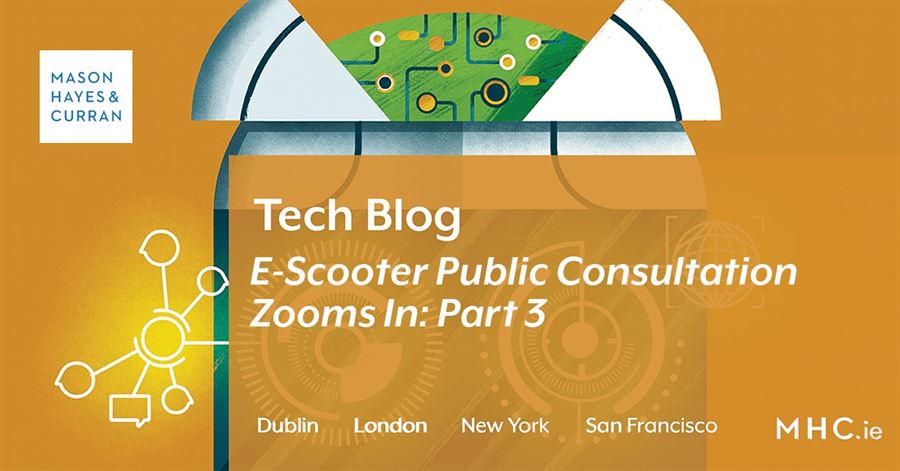 Like many other EU states, Irish authorities were caught off-guard with the explosion of electric scooter users on our roads. In part 1 and part 2 of this series, Lisa Joyce, Partner in our Public, Regulatory & Investigations team explored the uncertain legal landscape for e-scooters in the State, finding that they are effectively banned on Irish roads.

Given the influx and confusion surrounding e-scooters, it has been clear for some time that legislative intervention is required. However, the Minister for Transport, Tourism and Sport repeatedly stated that his principle concern is road and user safety, and, accordingly, said that he would not make any decision on the legality of e-scooters here pending the completion of a report he requested from the Road Safety Authority (“RSA”) on how they are regulated in other EU states.

After almost six months, the RSA completed its report, which was submitted to the Minister on 22 June 2019, and has recently been published online.

The report has tentatively recommended that e-scooters should be allowed on Irish roads. Interestingly, it also advocates for the use of e-scooters on environmental grounds, as they can help to reduce traffic congestion and, as a result, assist the State in meeting targets for the reduction of greenhouse gases.

However, based on a literature review and case studies from other countries both within and outside the EU, the report finds that there is no clear evidence or universal consensus as to best practice for the regulation and safety of e-scooters. The report also notes that, in many countries, in the absence of national legislation, regulation has emerged at local authority level, which can occur on a faster and more proactive basis. Interestingly, while the various local authority regulations vary dramatically in both scope and restrictiveness, many impose a maximum speed restriction of 25km/hr, which is the upper speed limit currently proposed by the European Committee for Standardization.

In light of the report’s findings, it makes six key recommendations on the regulation of e-scooters in Ireland. These are to:

In light of the RSA’s tentative recommendation, the Minister has carried out a public consultation on the use of e-scooters on Irish roads, as well as other powered personal transporters such as Segways and hoverboards. This consultation opened on 1 September 2019 and closed on 31 October 2019. Participation was open to all stakeholders, including road users of every type, transport providers, road planners and insurance companies.

It is reported that, once this consultation has concluded, the Minister will then decide whether to legalise the use of e-scooters.

Despite the welcome news of progress in this area, the slow pace will be frustrating for the large numbers of people who continue to use e-scooters daily, in spite of their effective ban on Irish roads.

However, safety concerns do remain, with reported fatalities and accidents in other areas on the rise. In Ireland, An Garda Síochána (the Irish police force) have also expressed unease at the potential for accidents here. The RSA has also warned that e-scooters “are not toys”, and that authorities will need to make tough decisions on investment into better roads infrastructure to ensure that e-scooters can be used safely and appropriately.

In common with the large population of e-scooter users and other, affected road users in Ireland, Mason Hayes and Curran eagerly awaits developments in the area, and welcomes the outcome of the public consultation on the issue.

Anecdotally, we are aware that the regulation of e-scooters continues to cause confusion, with different approaches to confiscation of e-scooters or sanction of users adopted by different Garda districts and different Garda members. There is understandable frustration for both the authorities and road users alike in the current lacuna in the law. What is certain, therefore, is that clarity is urgently needed in this area.