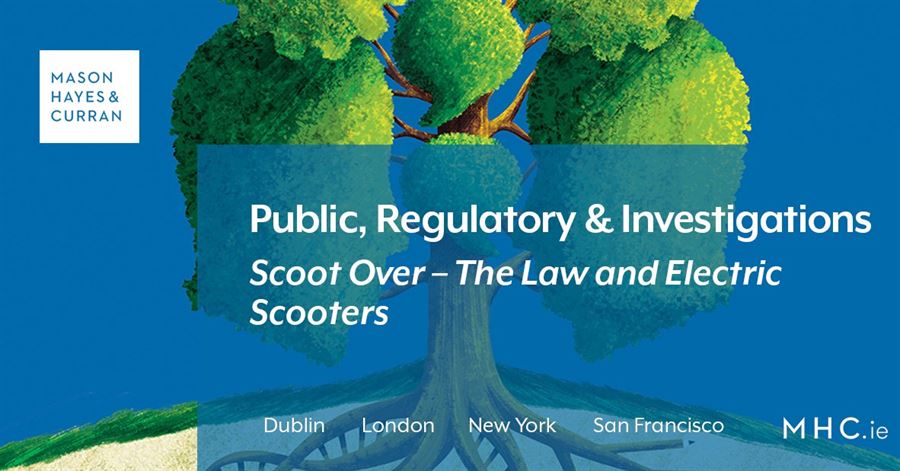 More and more Irish commuters are embracing electric scooters, which are seen as an affordable alternative to public transport and a means of avoiding traffic. An electric scooter looks similar to a child’s kick scooter but has the added feature of having a built in motor which can propel it to speeds of up to 30km/h.

However, users should be aware that, in Ireland, certain models of electric scooter are treated as equivalent to a motorbike or car, as they are considered mechanically propelled vehicles (MPV) under the Road Traffic Act 1961 (as amended) (RTA). This means that the usual legal requirements applicable to MPVs also apply to certain electric scooters. For example, the need to have a licence, tax and insurance, wear a helmet and ensure that the vehicle is registered and roadworthy.

The RTA defines an MPV as including “a vehicle the means of propulsion of which is electrical”. The Garda Síochána (Irish police force) has clarified that, if an electric scooter requires pedalling or an initial manual scoot to take off, and the motor only kicks in once already in motion, it is not considered an MPV.

However, if an electric scooter can be propelled from a stationary position by a motor alone, then it comes under the definition of MPV, irrespective of engine capacity. Users of such models in any public place must, therefore, ensure that the scooter is roadworthy, have a licence, tax and insurance, and wear a helmet. Also, with the exception of motorised wheelchairs, MPVs are not permitted in bike lanes or on footpaths and must be used on the road.

A call for change

The current legal position in Ireland could easily give rise to confusion for users, and consequent difficulties in enforcement, as certain models are treated differently, even though they do essentially the same thing.

In addition, some users are advocating for legislative change to incentivise the use of electric scooters. This includes elected politician, Noel Rock, TD, who commutes to Dáil Éireann (Irish parliament) daily by electric scooter, and has highlighted their environmental benefits. As of yet, however, draft legislation has not been published.

Such legislation could usefully regulate which models, if any, can be used on footpaths and bike lanes. The Road Safety Authority has recently reiterated that it is illegal to ride scooters in bike lanes. Dublin City Council has reportedly also called for an outright ban of electric scooters on public roads and bike lanes. However, the position in relation to their use on footpaths remains unclear.

Legislative drafters could also look at the approach in other countries. Indeed, the Department of Transport has asked the Road Safety Authority to carry out research to see how other EU Member States have regulated electric scooters.

In Belgium, for example, electric scooters are regulated in the same way as bicycles, once they do not exceed a maximum speed of 18km/h.

In France, electric scooters can be used on footpaths if they do not exceed a maximum speed of 6km/h. However, scooters capable of greater speeds are restricted to bike lanes. A new law is also proposed to require users to hold insurance and a licence equivalent to that for small motorcycles.

Lastly, in San Francisco, where electric scooters are immensely popular, they have been banned on footpaths, but can be used in bike lanes. Companies also offer electric scooters rentals where they can be picked up and dropped off in different locations. Given the popularity of bike rental schemes in Ireland, such an initiative could well be on the horizon here.

Electric scooters are here to stay but it remains to be seen how the legal landscape will respond to this new trend.

At present, the law in Ireland applies differently depending on the technical specifications of particular models. There are commuters using electric scooters daily who are undoubtedly unaware that they may be required to register, wear a helmet, and have a licence, tax and insurance. Regulation is also lacking on when and where such scooters can or should be used. For the sake of scooter users, other road users, pedestrians and the environment, it is hoped that some degree of regulation is forthcoming in the short term.