Dispute Resolution Update: Cost and Delay Implications of the Electronic Delivery of Judgments 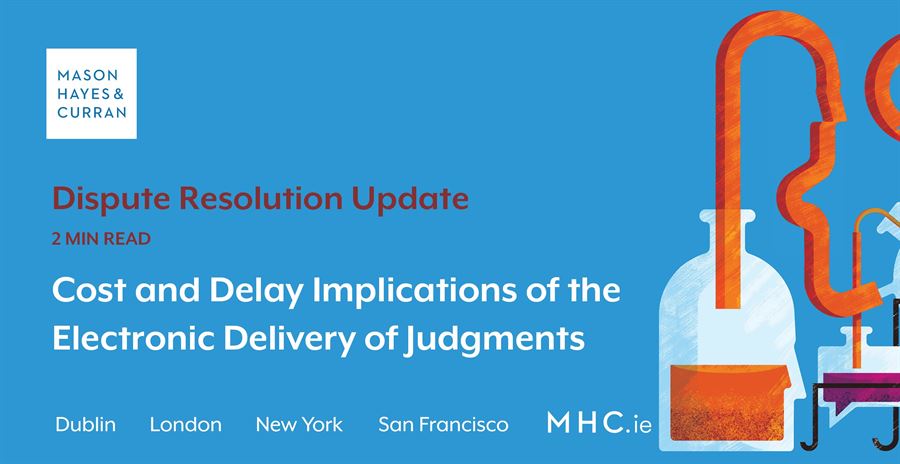 The Courts Service of Ireland indicated on 24 March 2020, that all written judgments would be delivered electronically by email to the parties to the proceedings. If there are any issues following the delivery of the judgment, such as the precise form of order or questions concerning costs, the Court should be notified by email. If the parties cannot come to an agreement on these issues, written submissions are to be filed electronically within 14 days of delivery of the judgment, subject to any other direction given in the judgment.

In general, the court order will not be made until either the parties are agreed on the precise form of the order, or the Court has considered written submissions by the parties.

Previously, matters such as these arising from a judgment would typically have been handled by counsel in a matter of minutes

In the recent decision of the Court of Appeal in The Governor and Company of the Bank of Ireland v Matthews, Mr Justice Noonan stated:

“... I would dismiss this appeal. This will result in the order for possession granted by the High Court taking immediate effect, but if the appellant wishes to seek a stay, she will have liberty to deliver a written submission in that regard not exceeding 2,000 words within 14 days and the respondent will have the same period to respond. The submissions should also deal with the question of costs. In default of such submissions being received, as costs follow the event”

This is a typical example of the approach being taken by the Courts and has a number of effects:

In almost all cases, issues arise in relation to costs and the precise form of the order. While the courts have always had discretion to direct submissions on such issues, in the pre-COVID-19 era, submissions on issues such as costs were normally dealt with in minutes, at minimal cost and written submissions would only be directed where the issues raised appeared to the Court to have some substance, novelty or public importance.

The Courts Service has appropriately implemented pragmatic measures to facilitate the administration of justice.

However, the requirement to deliver written submissions on costs and consequential orders, where the parties cannot agree, is adding additional delay and cost.

It is difficult to formulate a one size fits all solution that is better than what the Courts Service has devised.

For more information on efficiently managing proceedings, contact a member of our Dispute Resolution team.