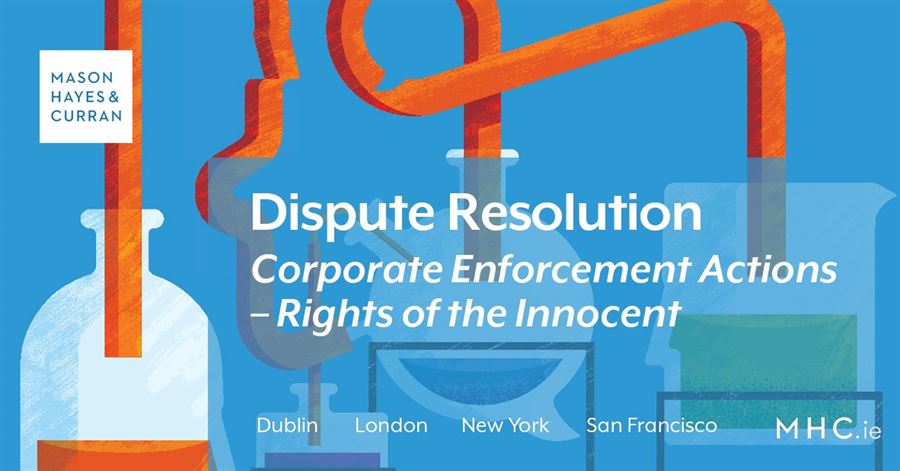 Ireland will soon have a new independent Corporate Enforcement Agency (CEA) tasked with combatting white-collar crime. This is just one of the Irish Government’s measures which is being described as necessary to overcome the current “inability as a country to secure more convictions when it comes to corruption and white collar crime”.

The CEA will have "ground-breaking" investigative powers and will be bolstered by a revised legislative framework, crafted to elevate Ireland’s standing in the fight against international economic crime. However, despite the focus on crime fighting and holding individuals to account, it is imperative that the Government’s new white collar measures do not forgo the presumption of innocence.

Ireland is in the fortunate position to learn from mistakes made in the UK, where in certain cases the names of individuals were tarnished irreparably. The CEA must ensure the same does not happen here. It is crucial that it adopts a balanced approach to the collection, investigation and ultimate prosecution of alleged offences. The rights of those against whom allegations are made must remain at the heart of each individual investigation. The presumption of innocence must permeate the CEA’s mandate and its working methodologies.

Egregious mistakes made by the UK’s Serious Fraud Office (SFO) have recently made headlines. These have included the collapse of the Tesco fraud trial; the collapse of the Barclays Bank trial; and the claim by ENRC for £70 million against the SFO for damages arising from reputational harm.

In April 2017, Tesco agreed to a Deferred Prosecution Agreement (DPA), which ascribed wrongdoing to three Tesco executives. The DPA allowed Tesco to avoid prosecution in return for a £129 million fine and £85 million compensation for investors. In January 2019, those same executives were cleared of all wrongdoing. In publically naming and shaming the executives, the DPA destroyed their reputations and livelihoods, notwithstanding their innocence. Last month, the trial of four Barclays bankers collapsed. The SFO had brought charges against them in 2017, alleging that they had sourced secret funding from Qatar during the financial crash. However, two months into the trial, the jury was discharged and the outcome of this case remains to be seen.

In April 2013, the SFO announced its investigation into ENRC for claims of fraud and corruption. This caused substantial share value loss and consequently, it slipped out of the FTSE100. The SFO has yet to announce whether it will bring charges against the company or any individuals and the investigation rumbles on.

Learning from past mistakes

These investigative failings highlight serious procedural inadequacies and the need for fair procedures in any investigation and subsequent prosecution. While corporate investigations are frequently complex and lengthy, publicly naming and shaming companies or individuals, prior to any independent investigation resulting in charges or prosecution, is premature and ill advised. Ireland’s new agency must conduct its investigations in a way that protects the names and reputations of those considered innocent until proven otherwise.

The modernisation of Ireland’s approach to white collar crime will significantly raise its international standing. Given the recent influx of banking and financial institutions into Ireland, coupled with the presence of influential global tech companies, the Government is facing unprecedented pressure to ensure that corporate regulation is vigorously enforced.

These white collar reforms will materially affect the way businesses oversee their operations and the actions of their employees, because as the Government has noted “poor management and governance practices can facilitate criminal wrongdoing”. Individual culpability is a key tenet of the Government’s reforms, but so too must be the presumption of innocence. The scope and reach of the package underscores the balancing act of ensuring that enforcement actions are conducted in a fair manner that withstands international scrutiny while also respecting the rights of individuals.

For more information on how these issues may impact your business, contact a member of our Dispute Resolution or Investigations & White Collar Crime teams.