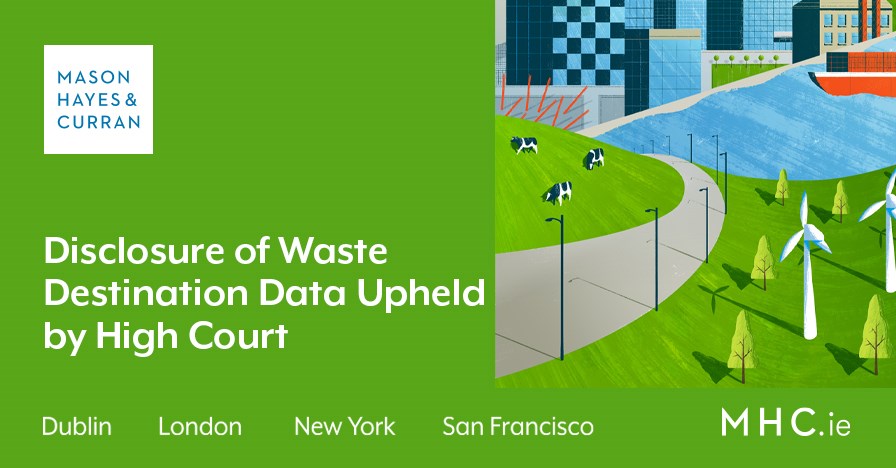 In the recent decision of M50 Skip Hire & Recycling Limited v Commissioner for Environmental Information [2020] IEHC 430, a waste collection company failed in its High Court challenge to prevent the release of its commercially sensitive waste destination data under the European Communities (Access to Information on the Environment) Regulations 2007-2018 (the AIE Regulations). The High Court ruled that the public interest in disclosure outweighed their interest in preserving commercially or industrially confidential information.

On 16 June 2018, a request was made to Fingal County Council (the “Council”) under the AIE Regulations for M50 Skip Hire’s 2017 AER. The Council provided a redacted copy of the AER, but refused access to certain information including, in particular, waste destination data (“WDD”) The Council found that the WDD was exempt as it contained commercially or industrially confidential information under Article 9(1)(c) of the AIE Regulations. On internal review, the Council affirmed its original decision and in August 2018, the requester appealed the matter to the Commissioner.

Decision of the Commissioner

The Commissioner set aside the Council’s decision, finding that while Article 9(1)(c) of the AIE Regulations did apply to the WDD, the public interest in disclosure outweighed the interests in refusal. The Commissioner noted that there was a substantial public interest in the disclosure of the WDD as this would facilitate further public scrutiny on waste management and may lead to the identification of gaps in enforcement. The Commissioner also stated that enabling waste producers to track the destination of their waste would allow them to make informed decisions about which waste collectors to use.

In rejecting the appeal, the Court made numerous findings that have a wider application to AIE requests generally, and re-confirmed some of the fundamental principles of the AIE access-regime. These are as follows:

This decision reconfirms some of the most fundamental principles of AIE law, as well as the significance of their application to third parties whose environmental information is held by public authorities.

It also clearly demonstrates how important it is for affected third parties to engage fully with both the relevant public authority and the Commissioner, if necessary, if they are consulted on an AIE request and are concerned about the release of their information, as well as the level of detail required when doing so.

For more information and expert guidance in all related matters, contact a member of our Public, Regulatory and Investigations team.