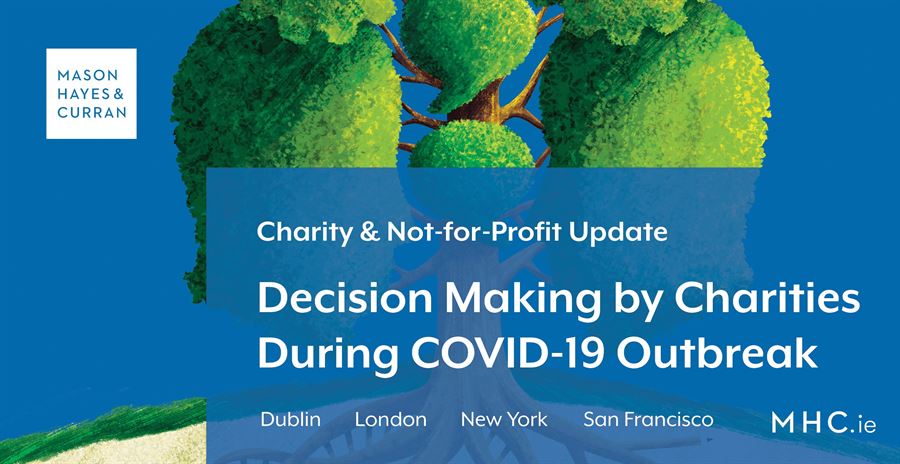 Decision-making by charity trustees has become increasingly difficult in the COVID-19 outbreak. Many charities are more challenged now than ever, with concern for employees, volunteers and service users, reduction in fundraising and cancellation of events. Volunteers, staff and trustees may now be working remotely. Your charity may be experiencing issues with delivering your services, or an increased demand for your services. Whatever the circumstances, it is crucial that charity trustees exercise oversight of their charities and do not delay in key decision-making. Good governance is even more important in times of crisis. The following information is relevant for charity trustees.

Charity trustees are responsible for the management of a charity. They must ensure that they are overseeing the charity’s operations and making any necessary decisions in this unprecedented time. Charity trustees must meet regularly to enable them deal with issues as they arise.

As charity trustees are currently restricted from being physically present to hold meetings, there are two main options:

For a company limited by guarantee (CLG), particular provisions apply to the holding of its members’ meetings, such as the annual general meeting (AGM).

It is important to check the constitution or governing instrument of your charity to determine whether virtual meetings of the charity trustees are permitted. The Charities Regulatory Authority (CRA) has stated that where a governing document is silent on virtual meetings, they do not believe this should be an issue given the current situation and public health considerations.

Where trustees decide to meet virtually:

For a charity that is a CLG, virtual meetings of directors are generally permissible where they are not specifically prohibited in the constitution. There is a distinction between members’ meetings, which must technically have a physical location and must note the physical location on the AGM/EGM notice, and directors’ or charity trustee meetings. These which can be completely virtual or telephonic. In this article we explain why this matters to CLGs.

For trusts and unincorporated associations, there is no implied power to hold a meeting by video or telephone conferencing if it is not specified in the governing instrument. The attitude of the CRA allowing virtual meetings in the circumstances, as stated above, is important in this regard.

In normal circumstances, changes to the governing instrument of charities would require the prior approval of the CRA. The CRA has confirmed that if a charity amends its governing document in order to provide for virtual meetings, the prior consent of the CRA is not required for that change. A copy of the charity’s amended governing instrument should be submitted to the CRA as soon as possible.

Where virtual meetings are prohibited

Where it is subsequently found that virtual meetings were prohibited or, in the case of trusts and unincorporated associations, the governing instrument is silent, but virtual meetings have been carried out, the charity trustees may have the option to ratify the decisions made at the virtual meeting, at a later date during a properly convened meeting.

A CLG can pass unanimous written resolutions of members instead of holding physical meetings, unless this is prohibited in its constitution. The exception is the AGM, which must be held at a physical location with a quorum present. Consideration should be given to postponing the AGM, provided not more than 15 months lapse between AGMs and an AGM is held each calendar year.

A CLG can pass unanimous written resolutions of its directors (i.e. the charity trustees) instead of holding a physical meeting, unless this is prohibited in its constitution.

Trustees of charitable trusts and unincorporated associations may have the option of passing a written resolution by all trustees in lieu of meeting, if this is provided for in the governing instrument.

For good governance, trustees should give due consideration to the matters referred to in a written resolution and engage in active discussion on those matters with the other trustees. Options with regards to passing written resolutions by email are becoming increasingly topical in the current circumstances.

We understand that charities have concerns about their ability to comply with charity law obligations in the current circumstances.

While the CRA has asked that charities endeavour to file annual reports on time, they have stated that they understand that there may be a delay due to the challenges charities face at this time. Annual reports which were due to be filed with the CRA on any date from 12 March 2020 to 29 June 2020 inclusive, may now be submitted to the CRA at any time up to 30 June 2020.

The CRA has provided answers to frequently asked questions they have received about the current situation on their website.

Potential delays at the CRA

The CRA is currently operating at a reduced capacity due to the COVID-19 outbreak. The CRA’s telephone lines and its office will be closed until 12 April 2020. They will continue to accept correspondence through their website’s contact form. As a result, it is likely that there will be delays in obtaining approval for applications. If you have any concerns about this, please contact our team.

The Companies Registration Office (CRO) has stated as at 28 March 2020 that they are not in a position to process submissions or answer queries at this time. Updates will be available on the CRO website.

The CRO has confirmed that all electronically filed annual returns that are delivered on or before 30 June 2020, will be considered filed on time. All changes of directors/secretary and changes of registered office that are filed electronically will be considered filed even though the original signed signature page is not received by the CRO within the appropriate time.

For employers, the COVID-19 outbreak has raised a lot of difficult questions – particularly around their obligation to pay employees. In our dedicated article here, we look at an employer’s obligation to pay employees where it is no longer in a position to provide employees with their normal contractual hours. In another article here, we discuss the Emergency Measures in the Public Interest (COVID-19) Act 2020, which:

The Department of the Taoiseach confirmed on 31 March 2020 that the Temporary Wage Subsidy Scheme will also support employers in the charities sector to retain staff who are employed under non-exchequer funding sources. Assurances have been given in relation to the continuation of exchequer funding supports for organisations in the charities sector.

The COVID-19 outbreak is an unprecedented situation raising additional challenges for charities. Good governance by charity trustees, such as swift decision-making and record keeping, is more important than ever.

For more information on the continuing impact of the COVID-19 crisis on your charity, please contact a member of our Charities & Not-for-Profit team.