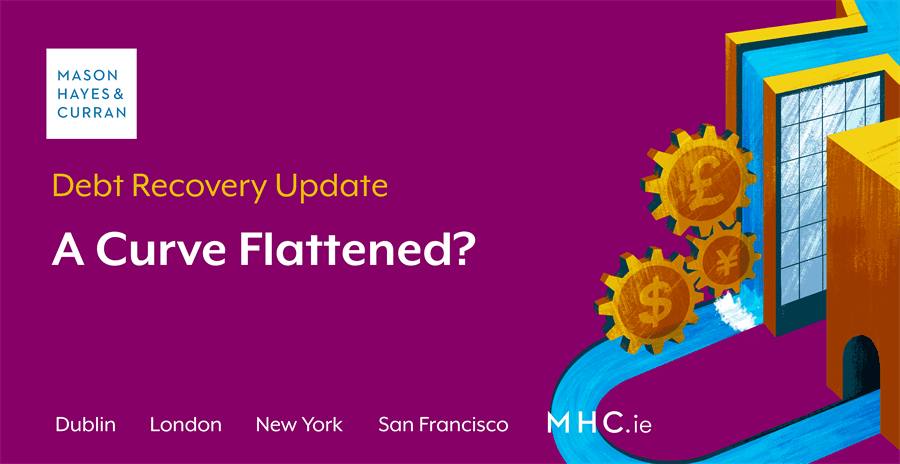 Our emergence from social and economic lockdown has led to much discussion around “the new normal” for our personal and business lives. In that context, the Courts Service Annual Report for 2019 (“the 2019 Report”) published in July 2020 is an opportunity to look back upon the pre-COVID-19 operation of civil and criminal litigation in the Irish courts, particularly developments on the debt recovery side.

The continued busyness of the Courts is certainly not in doubt, handling 445,000 new criminal cases and 233,000 new civil matters in 2019. Nor is its on-going programme of modernisation of technology, process and premises. At the launch of the 2019 Report, Chief Justice Clarke made reference to these many upgrades, noting in particular that the report of the Civil Justice Review Committee is expected in September, heralding significant further modernisation in civil litigation.

We have traditionally looked at the volume of default judgments obtained by creditors against debtors as a yardstick against which to measure economic developments. On a number of occasions in the past, we had noted that these have fallen dramatically from a peak back in 2010 - see updates here and here. Creditors obtained 12,182 default judgments against debtors in 2019, as opposed to 11,689 judgments in 2018. However it is worth drilling down further into that figure, as the actual increase is only at the District Court level, as the volume of both Circuit Court and High Court judgments were both down on their 2018 equivalents. 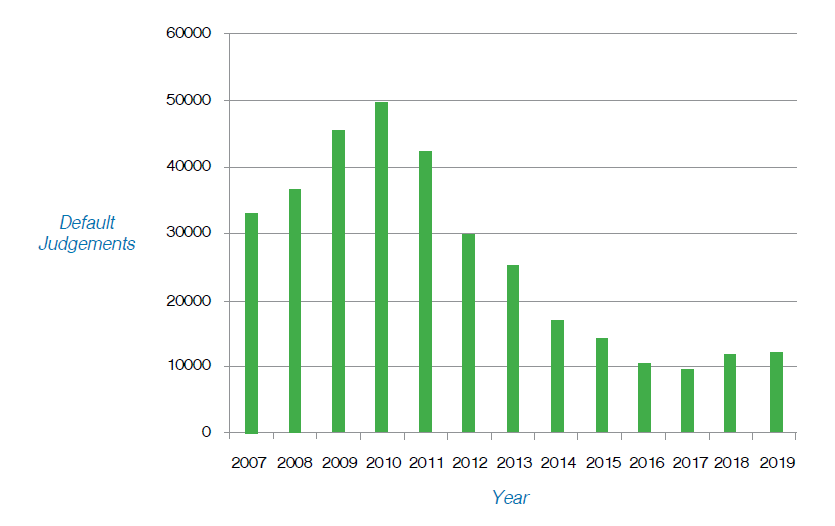 An analysis of the remedies that judgment creditors have sourced to avail of also confirms the drop in the volumes of creditor enforcement. In 2019 there were 1,954 Instalment Order proceedings commenced, compared with 2,236 in 2018 a drop of 13%. There were 2,180 judgment mortgage affidavits certified in 2019, a drop of some 20%. Declines in the numbers of judgments published followed a similar path. As the Chief Justice noted at the launch of the 2019 Report, the statistics seem to tell the story of a recovering economy. We would agree with that sentiment, and would add that, as suggested above, those who grant new credit (businesses and banks) are remaining vigilant on the limit of any credit lines extended and keeping them within €15,000, the upper limit of the District Court.

The Chief Justice believes that his view was reinforced by the fall in figures for recorded possession orders made, a 37% decrease, and new possession cases listed in both the Circuit Court and High Court in 2019, a 24% decrease.

Looking back over a longer span, whilst it is true that the number of new possession cases lodged in 2019 was only 15% of the equivalent 2014 figure, the fact remains that the drop in mortgage arrears, over the same period, was not so dramatic. Indeed, according to the Central Bank of Ireland, at the end of 2014 there were almost 80,000 mortgages in Ireland in arrears of 90 days or more. This had fallen to just over 42,000 at the end of 2019, which was a very significant drop of almost 50%, but nonetheless not one as seismic as the actual drop-off in the number of legal proceedings issued. We all know that the housing crisis has not abated even though the current coronavirus pandemic seems to have taken some the focus away from it. 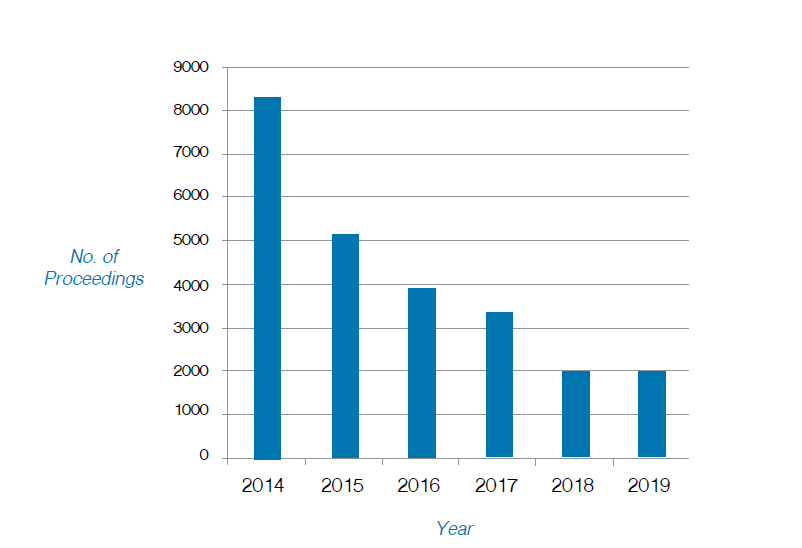 The 2019 report noted quite a dramatic 40% fall in the number of debtors who self-petitioned for their own bankruptcy compared to the previous year. There was a rise in the overall volume of debtors availing of arrangements under the Personal Insolvency Act 2012, with a small but significant 12% increase in the numbers of seeking Personal Insolvency Applications - the option for dealing with secured debt. There is undoubtedly more engagement with these mechanisms in recent years as well as an increased tendency on the part of debtors/PIPs to appeal a secured creditor's veto of such an arrangement. There have been quite a number of court decisions finding in favour of the debtor who appealed, and 2019 saw the courts dealing with relatively high-profile successful personal insolvency appeals brought by Ronan Ryan and by Frank McNamara.

Overall, the 2019 Report saw the trend of creditor litigation and enforcement falling from the previous year, but not as dramatically as those year-on-year falls had been, say five years ago. Indeed, the increase in judgment activity at District Court level and possibly in the personal insolvency sphere indicated an economy which was well into recovery mode in 2019. However, we cannot sign off upon this analysis without echoing the sentiments of the Chief Justice who commented that 2019 “seems now like a different era”.

The COVID-19 pandemic has caused all of us to re-evaluate personal, business and social norms. Despite our government's significant economic investment over the past weeks and months, there is undoubted hardship ahead for the Irish economy. Creditors will struggle to collect debt on time and within terms. The flattening of the debt collection litigation curve, as evidenced in the 2019 Report and its immediate predecessor reports, is unlikely to continue.

For more information and expert guidance in navigating these challenging issues, contact a member of our Debt Recovery team.