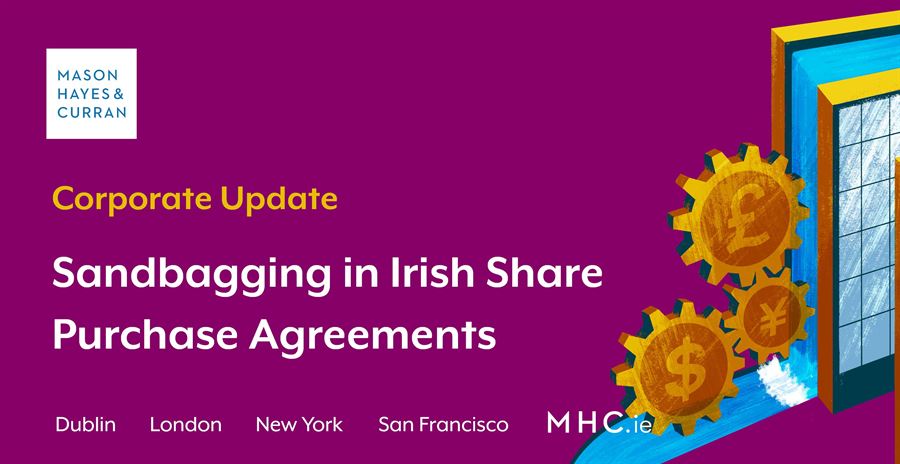 'Sandbagging', in the context of Irish law share purchase agreements, refers to a scenario in which the buyer has knowledge of a given potential liability, but has the ability, in spite of that knowledge, to bring a claim against the seller for breach of that warranty following completion.

If a buyer of shares in a company knows about a given issue or liability related to the company when the deal completes, it is currently unclear whether the buyer can legitimately bring a claim for breach of warranty following completion. This uncertainty remains whether or not the SPA includes provisions specifically setting out whether the buyer can successfully claim against the seller in the event that the buyer had knowledge of the relevant issue. These provisions are typically, in the US, known as “sandbagging” or “anti-sandbagging” provisions:

These clauses are sometimes found in Irish law SPAs. A compromise position often reached is that the SPA remains silent as to whether the buyer can successfully claim under the warranties if it was aware of the relevant issue at completion (ie no sandbagging or anti-sandbagging clause is included).

The issue has not been tried and tested in Irish courts and therefore, in the event of a dispute on this topic, the Irish courts would look to English and US decisions as persuasive authority on this subject. Here we review some of those decisions, given their relevance to Irish deals.

The English case of Eurocopy plc v Teesdale[1] has traditionally been regarded as a significant warning to buyers of shares that if they had knowledge of a given issue at completion, it is likely to be very challenging to successfully bring a warranty claim about that issue after completion, no matter what provisions are included in the SPA on the subject.

In this case, Eurocopy purchased shares in a company from Teesdale. Teesdale warranted in the SPA that there were no material facts or circumstances about the company that had not been disclosed to Eurocopy. The SPA provided that the warranties given by Teesdale were subject "only to the matters set out in the Disclosure Letter" and no other information of which Eurocopy had "actual, constructive, or implied knowledge" would preclude Eurocopy from bringing a claim for breach of warranty or reduce any amount recoverable for a breach of warranty.

Eurocopy brought proceedings against Teesdale for breach of warranty, due to Teesdale’s alleged failure to disclose material facts in the disclosure letter. Teesdale contended that the facts were not material and Eurocopy had knowledge of them before entering into the SPA which precluded them from relying on the warranty. Eurocopy’s claim was unsuccessful.

The decision in this case suggests that a buyer may not be able to rely on a warranty where it has actual knowledge of certain facts which contradict that warranty. This continues to be the case even where:

Infiniteland – failure to pass on knowledge

The judge held that:

The Court of Appeal’s observation on buyers’ and their agents’ knowledge is not binding law. Therefore, if a seller wants comfort that the buyer cannot pursue warranty claims for issues they are aware of before closing (or vice versa in the buyer’s case), it is important that the SPA expressly provides for this and, especially, that the relevant matter is disclosed in the disclosure letter to the requisite standard.

The position in the US is that either sandbagging or anti-sandbagging provisions are typically included in SPAs. The lack of certainty regarding the position in Ireland is emphasised by the divergence of interpretation and approach in different US states, particularly where an SPA is silent as to whether a buyer’s knowledge of a given issue should defat its claim for breach of a representation or indemnity. States such as Delaware, New York, Illinois and Florida are typically known to uphold claims by buyers even where they were aware of the given issue at completion. On the other hand, states such as Texas, California and Minnesota traditionally do not allow a buyer to successfully bring a claim for breach of warranty if the buyer was aware of the breach prior to closing.

The recent Delaware case of Eagle Force Holdings, LLC and E.F. Investments, LLC v. Stanley Campbell serves to underline the uncertainty in the US on this issue.Delaware had been widely acknowledged as a “pro-sandbagging jurisdiction”, meaning that if a contract was silent as to whether a claim could successfully be brought by the buyer where it had knowledge of the relevant issue at completion, the claim would not be defeated by that knowledge. The decision stated, “We acknowledge the debate over whether a party can recover on a breach of warranty claim where the parties know that, at signing, certain of them were not true. [Defendant] argues that reliance is required, but we have not yet resolved this interesting question.” Justice Strine’s partial dissent, also not binding, is more direct on the issue: “to the extent [plaintiff] is seeking damages because [defendant] supposedly made promises that were false, there is doubt that he can then turn around and sue because what he knew to be false remained so. Venerable Delaware law casts doubt on [plaintiff’s] ability to do so”.

With such a divergence of approach between the US states, this decision shows that even where a state’s stance on sandbagging was widely understood, that is open to challenge and change in a given decision. It is even more difficult in Ireland to interpret how the courts would decide on this issue, given that we are relying on fluctuating and divergent persuasive authority from England and the US.

While the extent of the impact of COVID-19 on Irish deal trends remains to be seen, early indications are that it is giving rise to a more buyer-friendly market, in which buyers have more leverage to insist on deal terms which are strongly in their favour. For that reason, it is possible that it could become more prevalent for sandbagging clauses to be included in Irish SPAs in the short and medium term.

The Irish court may well uphold the provisions of the SPA on this subject, if such a clause is included one way or the other. The Infiniteland decision certainly suggests that the contractual terms agreed by the parties to the SPA may well be the crucial factor in the success or failure of a claim on this issue. The parties should therefore be careful about accepting contractual language on this subject which contradicts their intentions. This is because there is no guarantee that common law will defeat the provisions of the SPA, and there is no guidance on this subject from the Irish courts.

It should be emphasised that the issues around sandbagging are only relevant if a given liability in a target company was not disclosed, or not disclosed to the agreed contractual standard, under the SPA. Buyers and sellers of Irish companies should therefore take note of the following guidance:

For more information and expert advice on successfully concluding purchases or sales of Irish companies in the Technology sector and beyond, contact a member of our Corporate team.