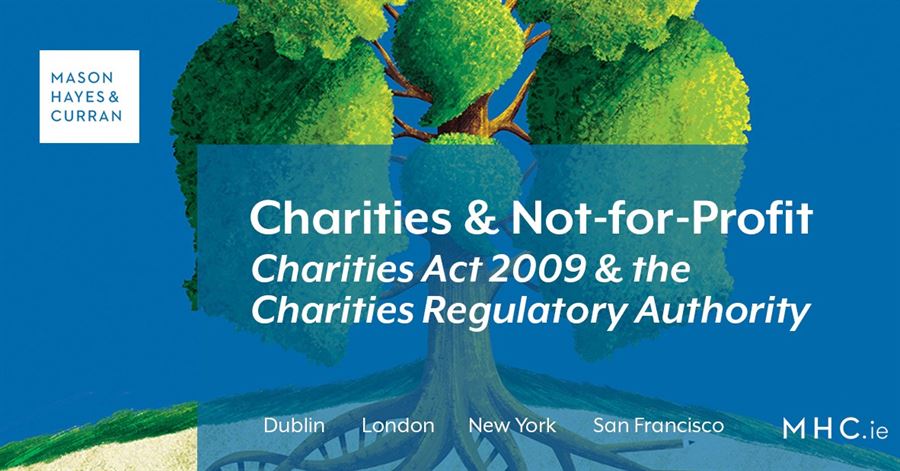 Charity law in Ireland is governed by a mixture of legislation, case law, and regulation, but the Charities Act 2009 is undoubtedly the most important development in the area for decades, and provides the bedrock for the modern regulation of charities in the Republic of Ireland.

The Charities Act 2009 confirms that there is no one set structure for charities. A ‘charitable organisation’ may be a charitable trust, a body corporate, or an unincorporated body of persons.

Generally, in order to come within the definition of a ‘charitable organisation’, a body must:

• Promote a charitable purpose only;

• apply all of its property in furtherance of that purpose (except for moneys expended in the operation and maintenance of the body, including remuneration and superannuation of its staff); and

In the case of a religious organisation or community, a charity may apply funds for the accommodation and care of its members.

The Charities Act 2009 sets out who are the charity trustees of a charity, and their duties.

It is an offence for a charitable organisation to carry out activities in advance of being granted registration.

All charities must also comply with their obligation under section 52 of the Charities Act 2009 to prepare and submit to the Charities Regulatory Authority a report in respect of its activities in each financial year.

Financial transparency is one of the key ways to reassure donors that their contributions are being used as intended. A charitable organisation must file its annual report with the Charities Regulatory Authority within ten months after the end of each financial year.

The annual report sets out information regarding a charity’s activities for the reporting period, the number of employees and volunteers involved, the charity’s sources of income, fees charged, and financial information.

There are severe penalties which may apply under section 10 if there is an offence committed under the Charities Act 2009.

Where the offence is committed by a body corporate and is proved to have been committed with the consent or connivance of or to be attributable to any neglect on the part of any person, being a director, manager, secretary or other officer of the body corporate, or a person who was purporting to act in such capacity, that person shall, as well as the body corporate, be guilty of an offence and shall be liable to be proceeded against and punished as if he or she were guilty of the offence concerned.

Other offences include not keeping proper books of account or making false statements to the Charities Regulator.

The Charities Regulatory Authority has the power to remove an organisation from the Charities Register in certain circumstances. It can further direct a charity in writing to provide it with such information as it may reasonably require to perform its functions, and that charity must comply with the direction. If a charity does not comply with a direction in writing to produce documents or records, a judge of the District Court may, in certain circumstances, issue a warrant to enter and search the premises of the charity and to take possession of documents and records.

The Charities Regulatory Authority may also appoint an inspector to investigate the affairs of a charity, and the charity trustees or agents of that charity must produce documents to the inspector and assist the inspector in connection with the investigation.

The Charities Regulatory Authority has set out a number of useful guidance documents for charities such as “What is a Charity”? and “Guidance for Charity Trustees”. It has also published the Charities Governance Code.

The information above is just a high level overview of some of the most important points. If you have any queries in relation to charity law or any of the content of this page please feel free to get in touch.

We have the largest team of solicitors dedicated to the charities & not-for-profit sector in Ireland, and we advise on the design and formulation of the many policies and regulations that govern the sector.