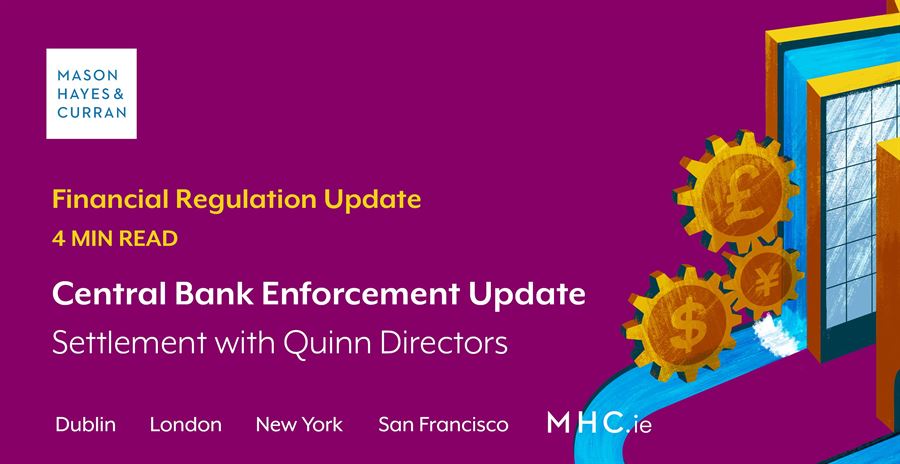 QIL, established in 1996 by businessman Seán Quinn, went into administration at the request of the then Financial Regulator on 30 March 2010. The Central Bank, as part of a settlement agreement with QIL, imposed the maximum fine (at the time) of €5 million due to QIL’s failure to maintain adequate solvency levels between October 2005 and March 2010. The fine was subsequently waived in the public interest as QIL was solely reliant upon the insurance compensation fund for funding.

QIL had failed to maintain its minimum solvency requirement and this led the Central Bank to question the soundness and adequacy of QIL’s administrative and accounting procedures and internal control mechanisms relating to the management and monitoring of the assets of QIL’s subsidiaries.

Following the Central Bank’s investigation into QIL, the Enforcement Investigations Division of the Central Bank produced an Investigation Report which identified its suspicion that the Directors had participated in the commission of a prescribed contravention of Regulation 10(3) of the European Communities (Non-Life Insurance) Regulations 1994 which required that:

“Every insurance undertaking shall have administrative and accounting procedures and internal control mechanisms which in the opinion of the Bank are sound and adequate.”

The Central Bank commenced an inquiry into this and in October 2017, the Directors sought to impugn the constitutionality of Part IIIC of Central Bank Act 1942 (as amended) (CBA), however, this challenge by the Directors was not successful. The Director of Enforcement and AML, Seana Cunningham, described the success of the High Court challenge as being:

“a critically important outcome as the Administrative Sanctions Procedure is the key enforcement process under which we take action against firms that breach regulatory requirements and senior individuals who participate in those breaches.”

The Central Bank inquiry into the Directors proceeded and a settlement was entered into with Mr Liam McCaffrey in December 2019 and with Mr Kevin Lunney in July 2020.

The inquiry into the Directors and the settlement agreements entered into with them demonstrate the lengths that the Central Bank is willing to go to where regulatory breaches occur and the timeframe over which they are prepared to pursue firms and individuals.

The Director of Enforcement and AML has commented that the conclusion of the inquiry demonstrates the willingness of the Central Bank to proceed to an inquiry where it is warranted and noted that:

"The Central Bank will not shy away from deploying the full suite of powers available to it and publicly defending those powers. The important take away here is that the Central Bank may use the full extent of its powers, including pursuing cases to Inquiry, in order to promote compliance and high standards in financial services.”

The pro-active approach of the Central Bank to hold senior persons accountable for regulatory breaches will be further strengthened by the enactment of the pending Senior Executive Accountability Regime (SEAR). SEAR will make it much easier for the Central Bank to take enforcement actions against executives based on their own individual actions rather than, as is currently the case, having to link their misconduct to a breach by the regulated entity.

For more information, contact a member of our Financial Regulation team.