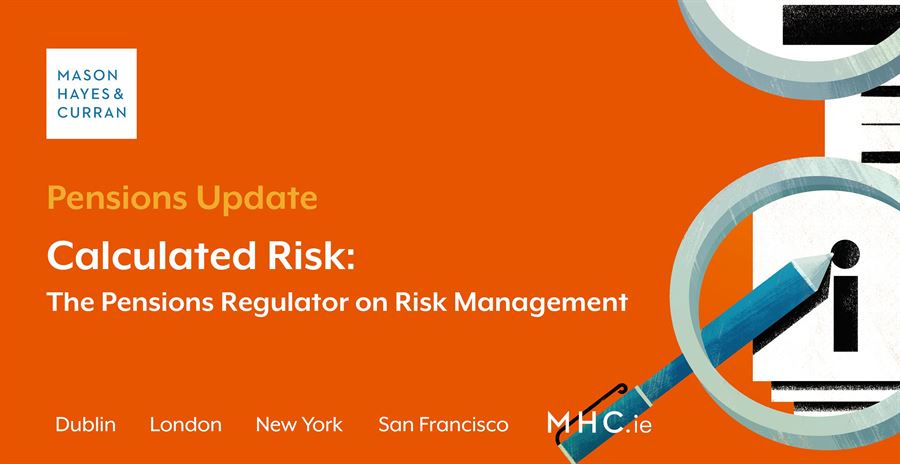 The Pensions Regulator’s recent presentation to the Society of Actuaries emphasised again for actuaries and trustees that a forward looking risk-based supervisory approach will include an analysis of future threats to member interests, as well as past breaches of the Pensions Act. In his presentation, the Regulator echoed his delivery at last year’s IAPF conference and confirmed that a central part of scheme oversight under the IOPR II Directive (Directive) will involve an analysis of prevailing trustee cultures; meaning values, expectations and practices.

Source of the concern

In referring to scheme risk the Regulator did not simply mean longevity and investment risk but other risk categories as well, including operational ones. He also noted that the sources of the Pensions Authority risk-related concerns stem from discussions with trustees and actuaries during its recent engagement programme. The Regulator went on to note that the Pensions Authority had “come across some schemes where there clearly has been very little consideration of risk, and it seems to be simply accepted as a fact of life, without any consideration of the options available to the trustees”. He said the Pensions Authority will aim to implement a two-fold objective by developing a risk awareness culture as well as implementing a method for measuring risk for supervisory purposes.

The Regulator also confirmed that once transposition of the Directive has taken place, the Pensions Authority will aim to put two processes in place. The first will be the “Own Risk Assessment” (ORA) which will be a responsibility for each trustee board. The second will involve the Pensions Authority’s supervisory review process.

The Regulator also confirmed that the ORA will be included in the amended Pensions Act (Act) which will include a number of minimum areas that must be covered by trustees. These provisions in the amended Act are likely to be supplemented by guidance issued by the Pensions Authority. The Regulator also made it clear that the ORA will need to be comprehensive and address all “significant risks to members’ interests”. For trustees, this will mean thorough information gathering and for defined benefit (DB) schemes it will include a quantitative analysis of all relevant risks and their impact on member interests. The Regulator stressed that any such analysis as part of the ORA must be objective and must not be used as a demonstration to show that a scheme is operating well. The Regulator also anticipates that the ORA for each scheme will be used to provide the Pensions Authority with insight as to how schemes are governed.

The Pensions Authority’s expectations and approach

To supplement the ORA, the Pensions Authority is also developing its own quantitative measure for all DB schemes for the purposes of assessing investment and longevity risk.

The presentation also refers to the importance of the commitment and strength of the sponsor. The Regulator admits that while there is no way of quantifying the value of sponsor support for a scheme, the Pensions Authority does expect trustees to have “a thorough informed conversation with the employer”. He goes on to add to that this should include sharing risk information and going through responses to various potential scenarios. This should allow the trustees to make an informed rational assessment of the employer’s strength on a qualitative basis.

The Regulator notes that as we await transposition of the Directive, trustees should engage in self-assessment while taking into account the main requirements of the Directive. For DB schemes, the Regulator says this should include an assessment of risk awareness, data and scheme management. While there has been speculation as to how the Directive will be implemented, it is now expected to occur by way of transposing regulations before the end of quarter one of this year.

It is becoming increasingly clear that when the Directive is transposed into Irish law, we will see a far more involved and active Pensions Authority than we have seen before. Trustees of every scheme type should consider the ORA requirement and ensure that their scheme’s risk manager has the necessary experience, qualifications and is up to speed on what needs to be done. This work should commence without delay given the expected timeline for transposition of the Directive.

If you would like to discuss the IORP II Directive or the Pensions Authority requirements, contact a member of our Pensions team.